Area of rain and embedded rumbles of thunder is pushing due east across southern Wisconsin, however we're still keeping our eye on the storms that have popped up in NW Illinois over the last hour. 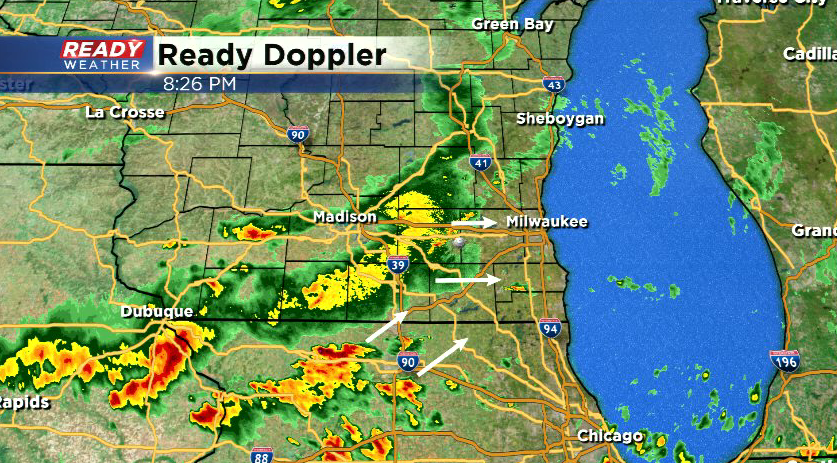 These are currently lifting ENE and could move into Walworth or Kenosha counties over the next hour or so. However, our current area of rain and less favorable environment for storms may keep them in Illinois/weaken them if they do make it over the border. This will be our best chance for severe weather.

Line of storms to the west has been generally tracking to the east over the last two hours, but we'll be watching for the portion in NE Iowa to slowly drop ESE as it moves closer this evening. 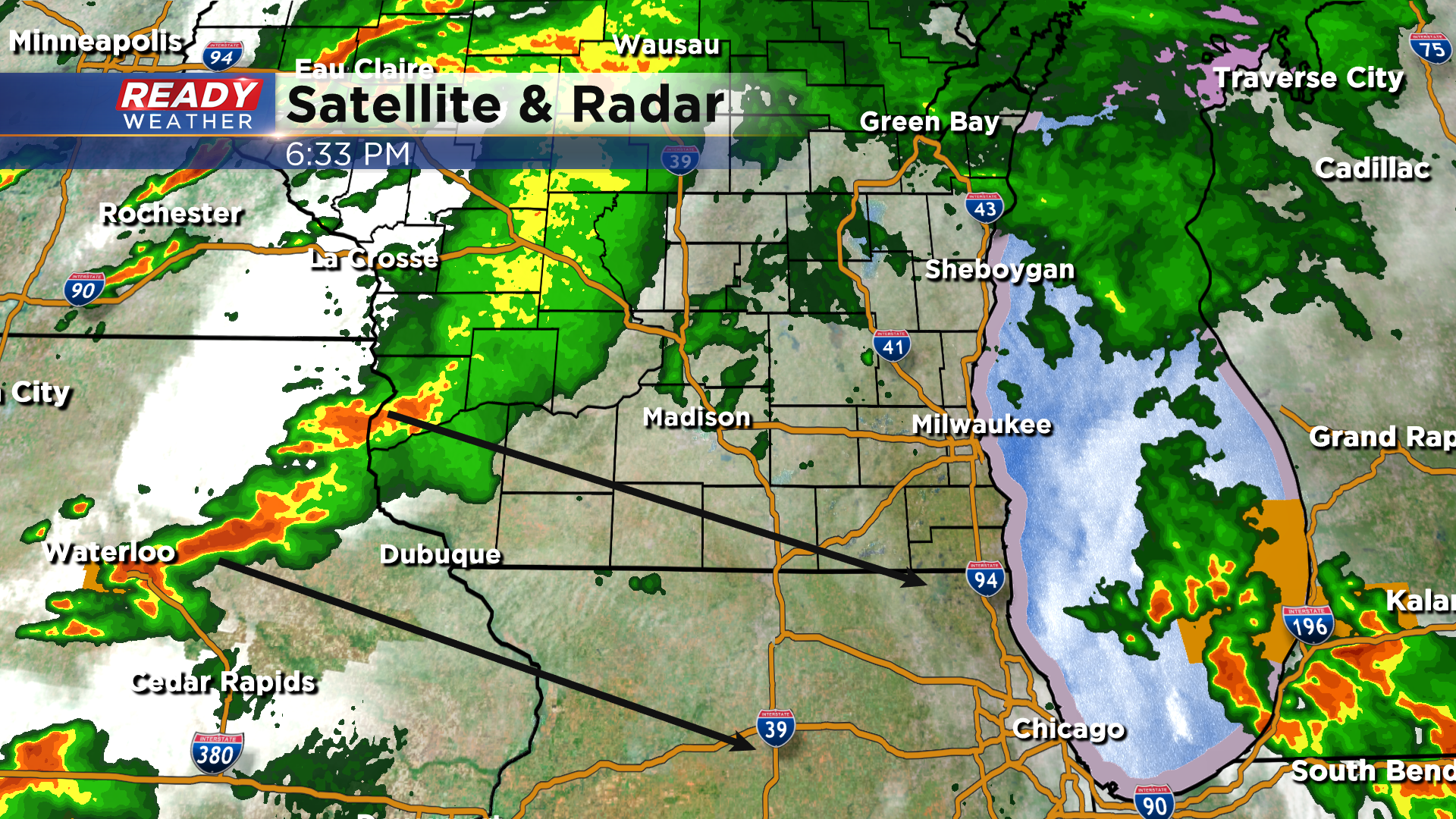 Storms want to track towards the better instability, which is in northern Illinois. However, there is *some* instability in Walworth, Racine, and Kenosha counties so we will keep an eye on the line as it approaches. If there is any severe weather this evening, it'll likely be along the WI/IL border.

Showers continue to track through southeast Wisconsin with the back edge currently approaching Madison. Second line of storms continues to get it's act together in Minnesota and Iowa where Severe Thunderstorm Watches are in place. 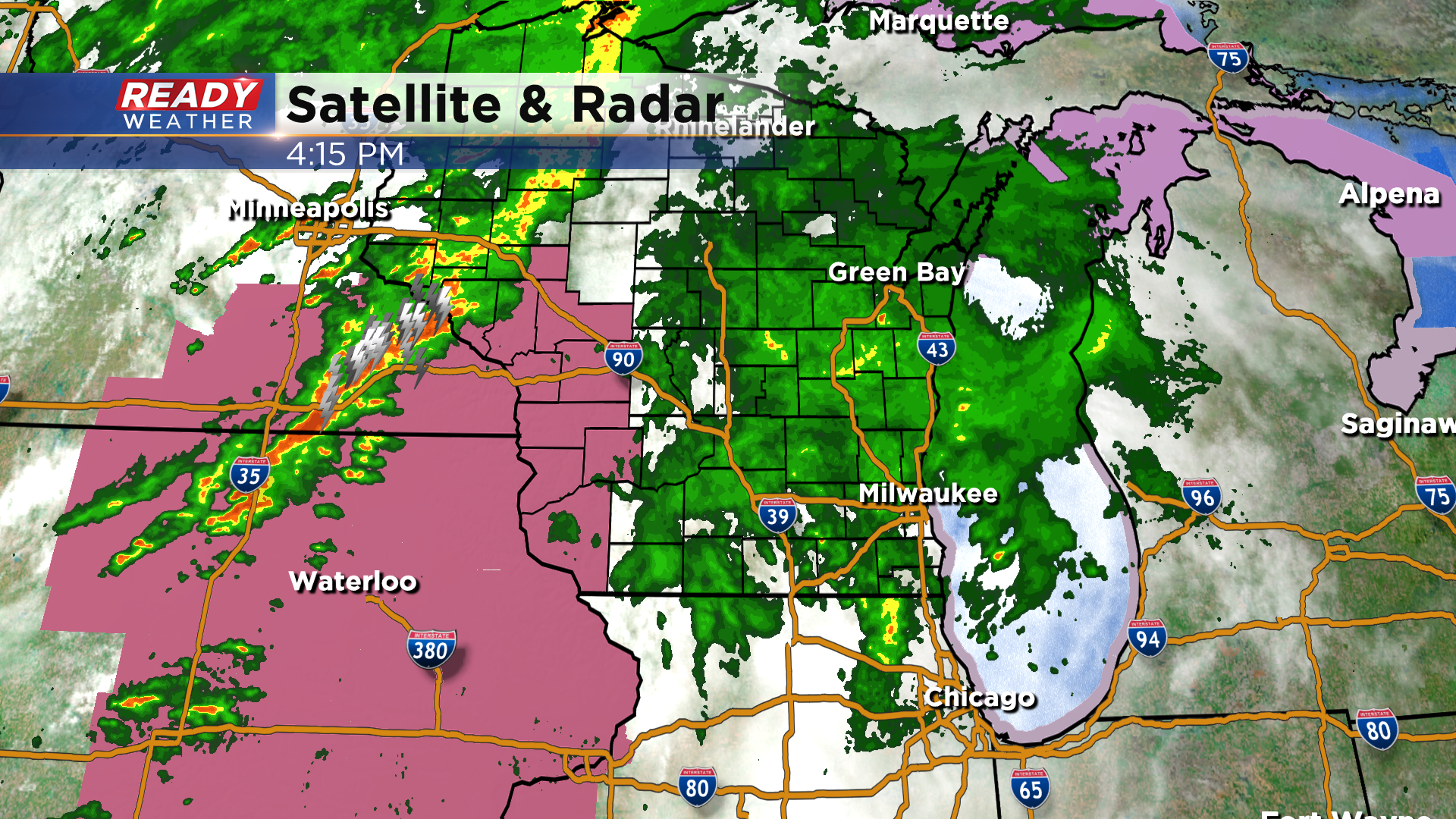 Current thinking is the line of storms to the west will continue to strengthen over the next few hours as it works into western Wisconsin where there has been more sunshine today. However, the ongoing showers and cloud cover should limit our severe potential this evening, so we're expecting the line to weaken as it pushes in between 8pm-12a. 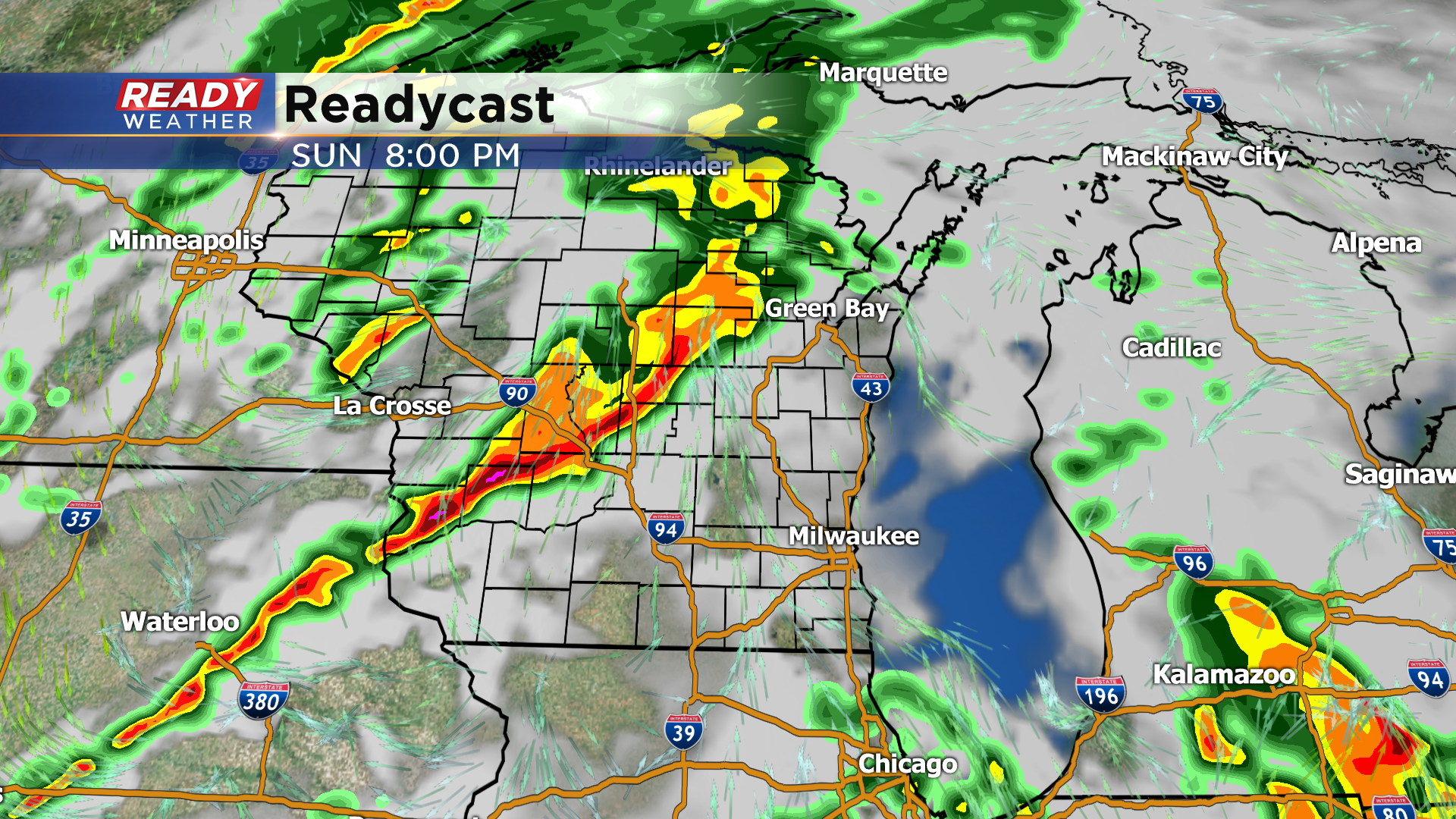 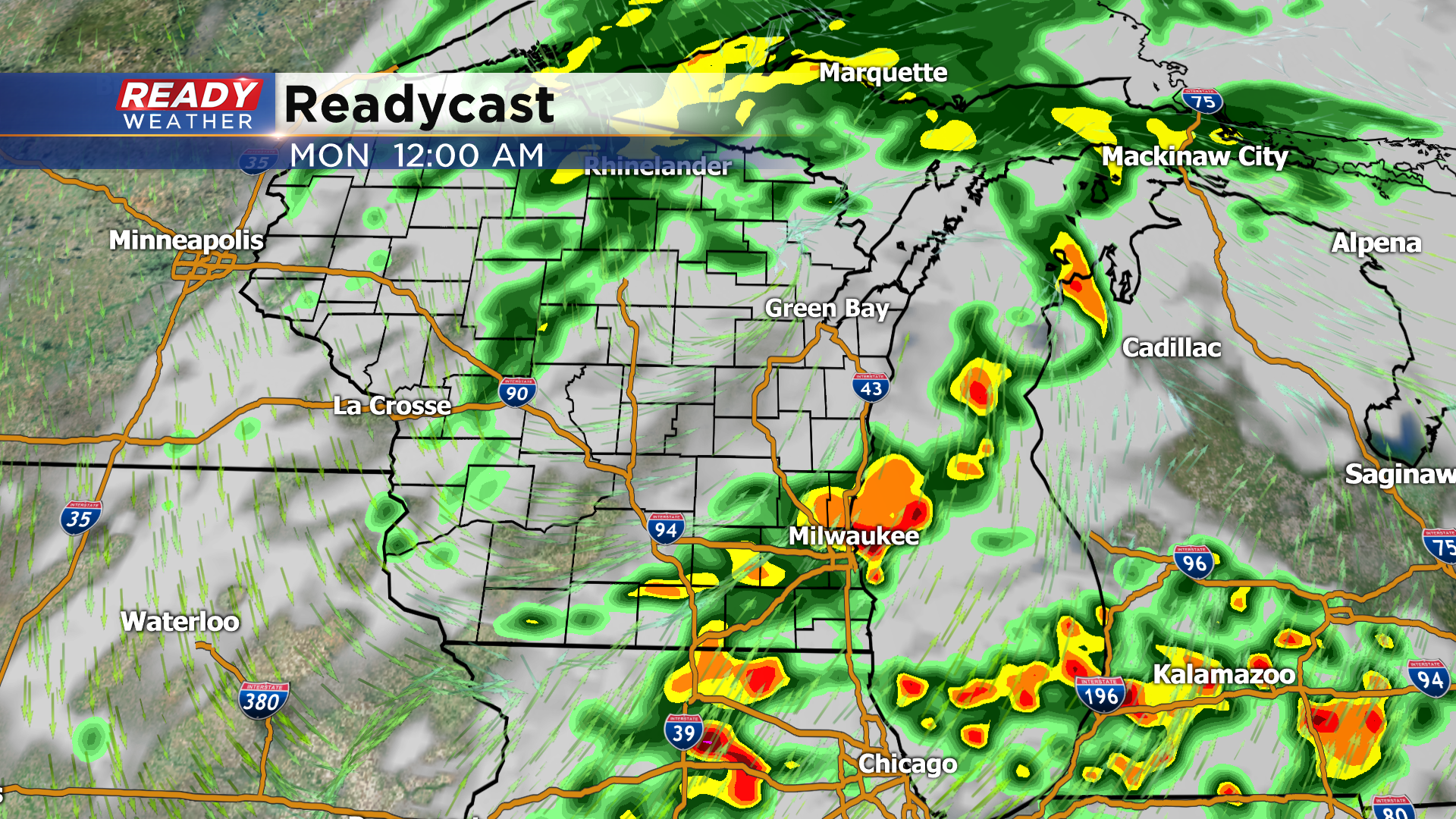 That being said, the severe potential isn't completely zero, and we could still have damaging winds and hail with the storms. Best chance for strong to severe storms continues to be along the WI/IL border.

Light rain is now filling in across southern Wisconsin, but at this time there aren't any storms. The environment for storms is a bit more favorable to our south near Chicago with this round, but some instability is in place just over the Stateline, so it bears watching. This round of rain should exit around 5pm or so. 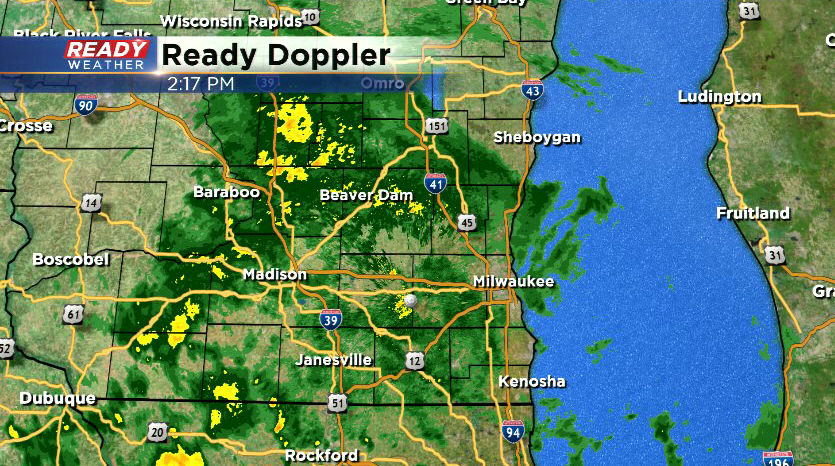 Our attention then turns to the west where thunderstorms are beginning to fire ahead of the cold front. There has been more sunshine in SE Minnesota, NE Iowa, and western Wisconsin this afternoon, so storms will likely intensify into a line as it pushes into this region. A Severe Thunderstorm Watch has been issued in this area until 9pm. 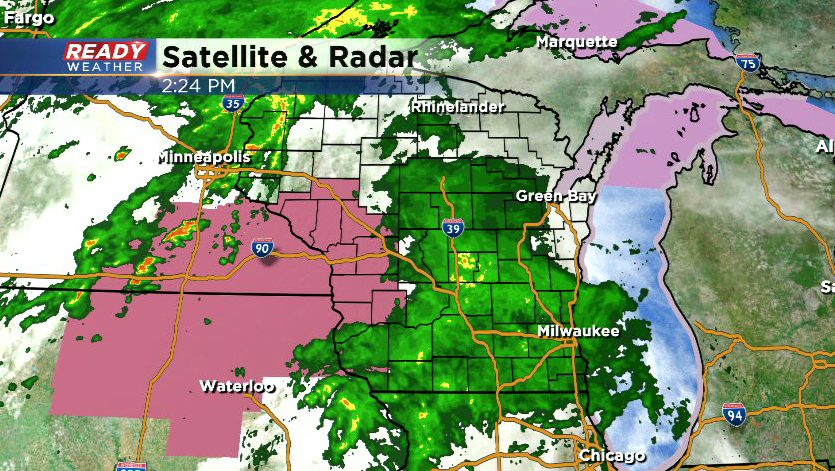 The big question still remains whether or not the sun will come out behind the current area of rain and destabilize us before the line of storms arrives between 8p-12a. Currently thinking the line splits or dives southeast with the brunt of the severe weather missing southeast Wisconsin, but if we get some sun it could hold together and track through the whole area. 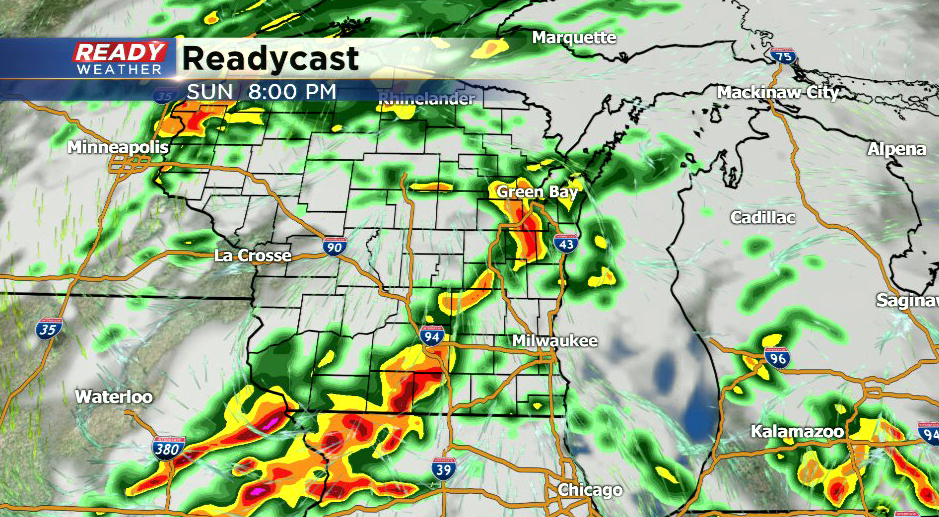 Continue to check back for updates.

Dry air has cause a decent amount of rain to erode with the first round approaching from the west. We'll likely see *some* rain from this, but it looks rather light. Farther south, a complex of storms is developing that will stay in Illinois as it tracks east through the afternoon. 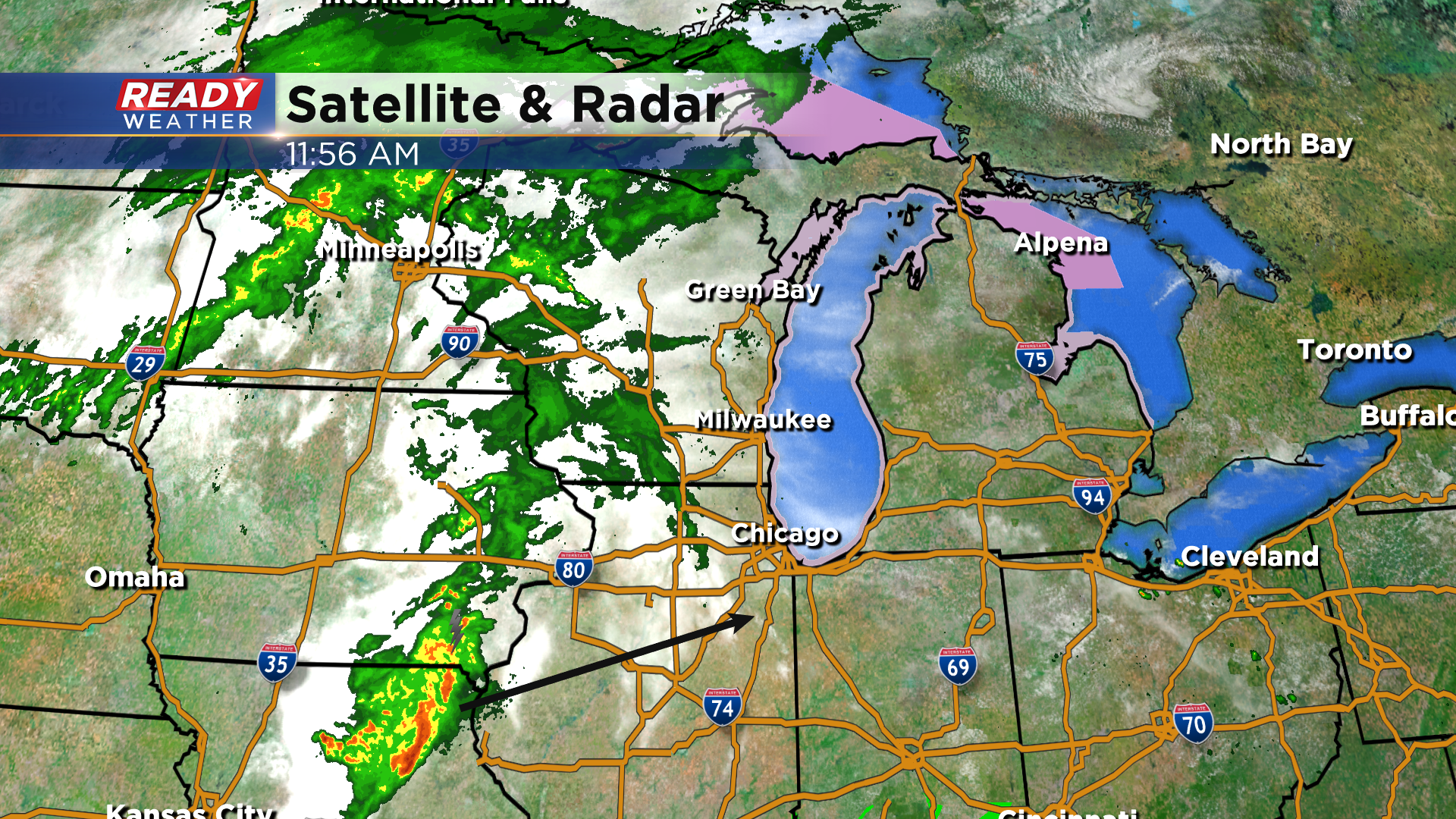 There has been some instability creeping closer to Kenosha, so we'll keep an eye on whether or not a few isolated storms pop on the southern edge of the rain late this afternoon. If they do pop, they could become strong to severe with damaging winds and hail as the main threats. 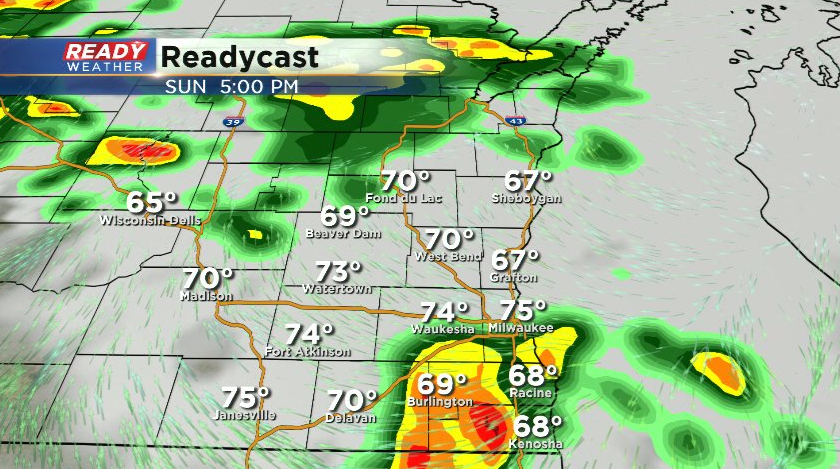 With round one looking rather lackluster, we could see a more potent round of storms between 8pm-12am. This is still very uncertain and will depend on if we see more sunshine late this afternoon. 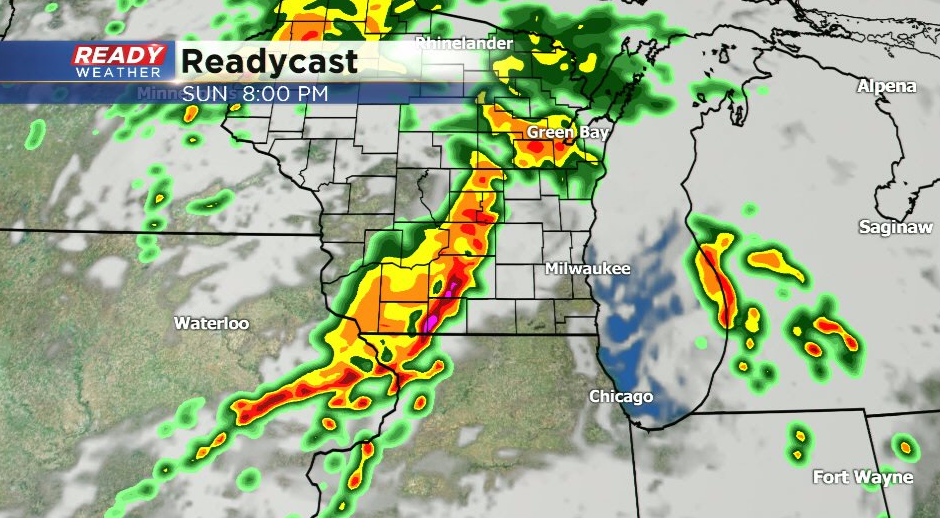 Damaging straight-line winds would be the main threat with this round of storms. Check back for updates.

It's been a quiet start to Father's Day with filtered sunshine from ongoing rain and storms in Iowa. Cloud cover will thicken up as this area of rain pushes in by early afternoon. 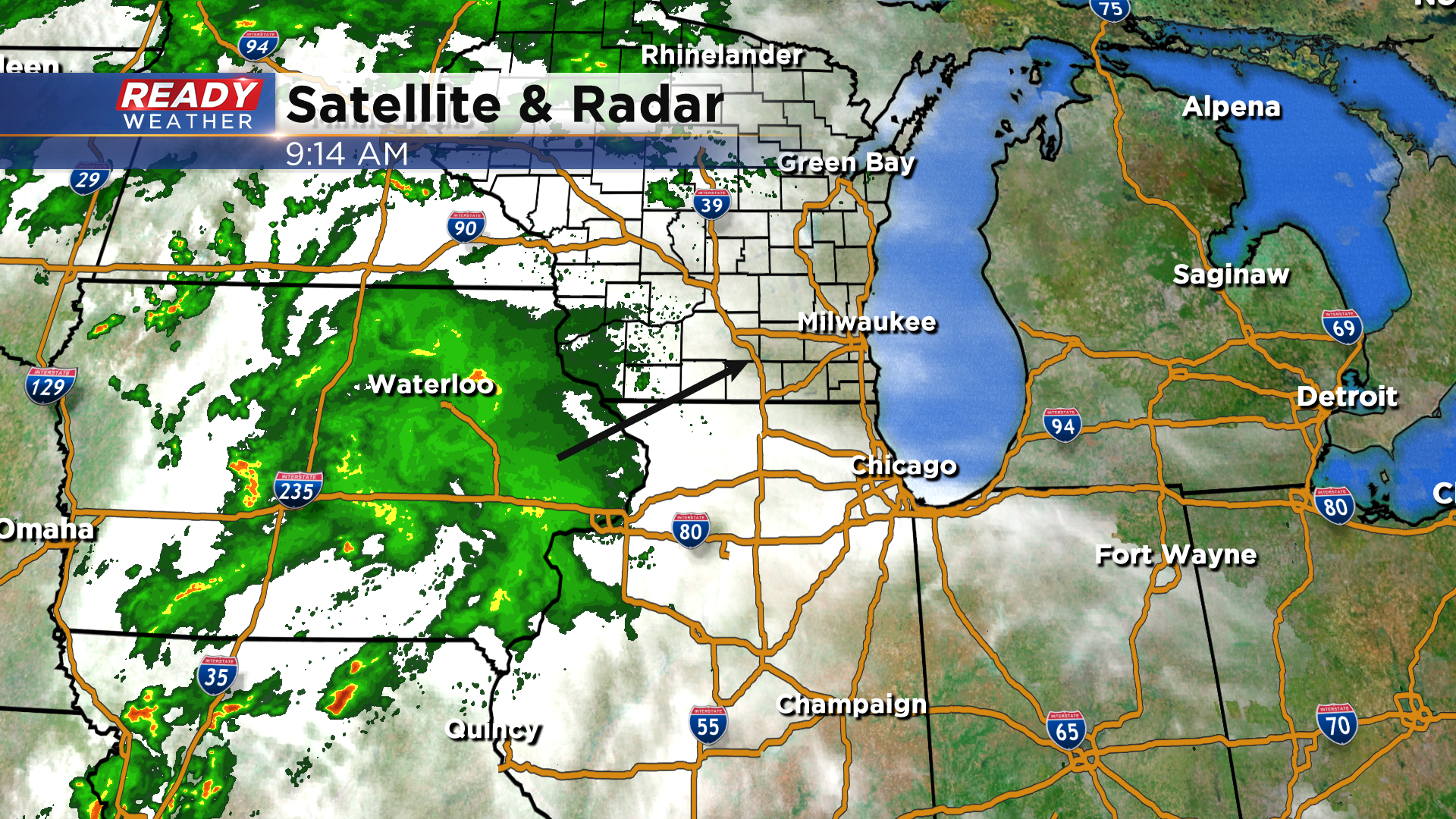 This round will likely remain below severe limits as it'll be difficult to build in any instability. However, we'll be watching the far southern edge of the batch of rain for stronger thunderstorm development. If this is able to occur, it could clip Walworth or Kenosha counties, but at this time it looks like the the best chance for that will occur in northern Illinois. 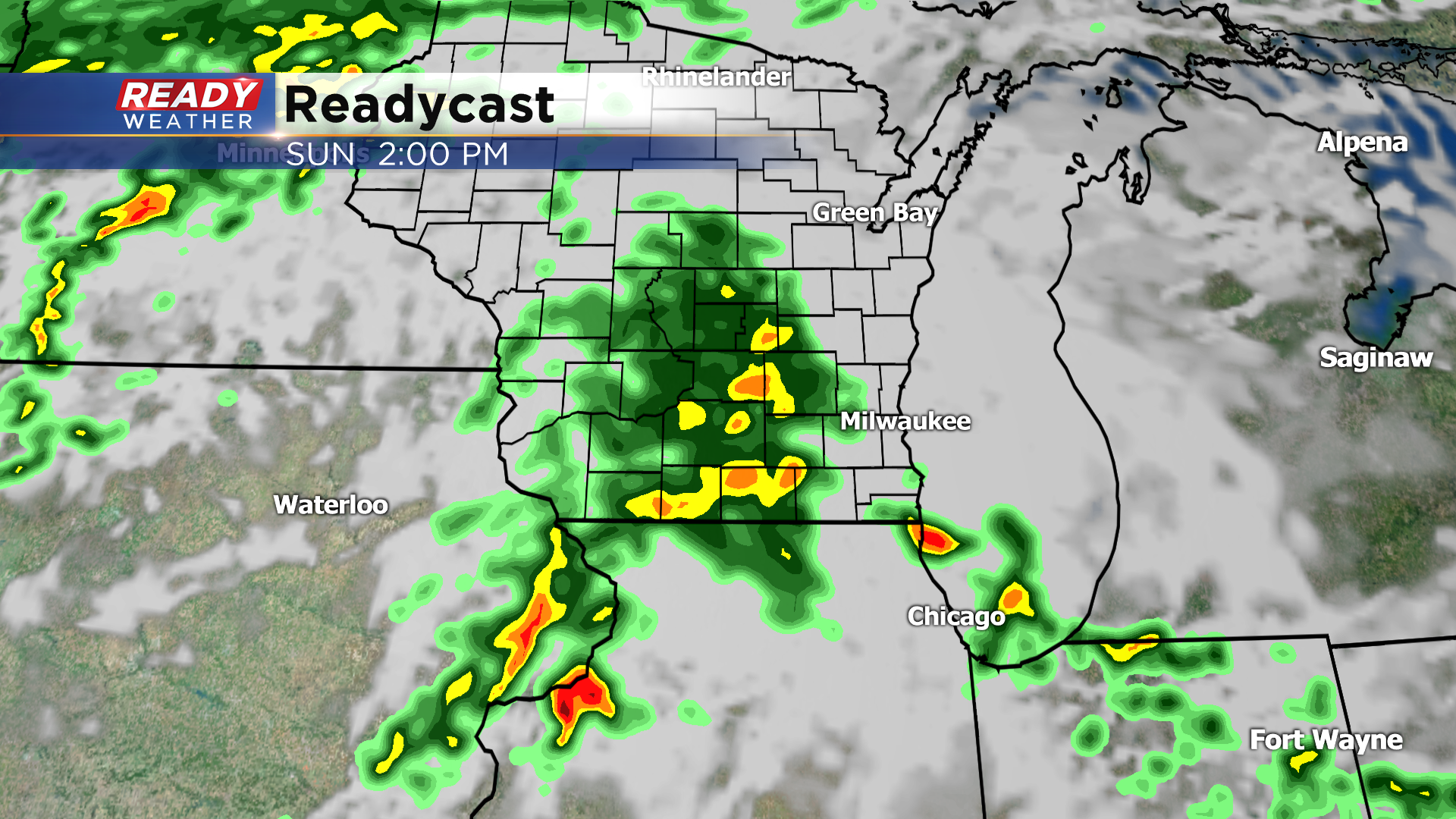 This round will exit by late afternoon with a break in the action expected during the early evening hours before the cold front arrives mid to late evening. This front could bring another round of rain and storms, but the severe threat with this round is very dependent on whether or not we see some breaks in the clouds between 5-8 pm. If we see some sunshine between rounds, we'll be able to build some instability which would increase our chances for severe storms, potentially a line. If the clouds hold strong between rounds, storms would likely remain below severe limits. 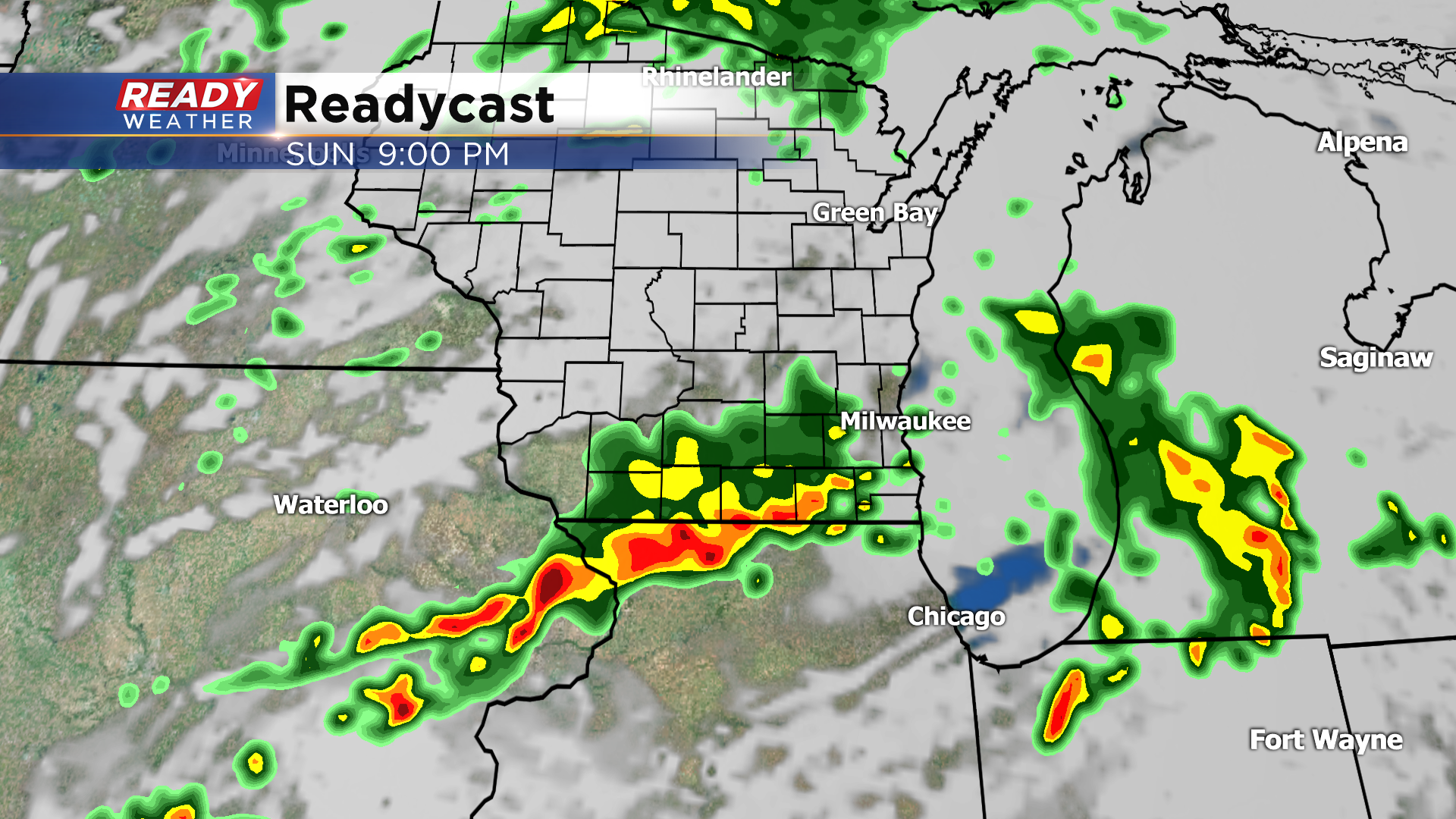 While a good majority of southeast Wisconsin is under a Level 2, Slight Risk, for severe storms, I think the best chance for any severe weather could be confined to right along the Wisconsin/Illinois border in Walworth and Kenosha counties. This map will be updated throughout the day. 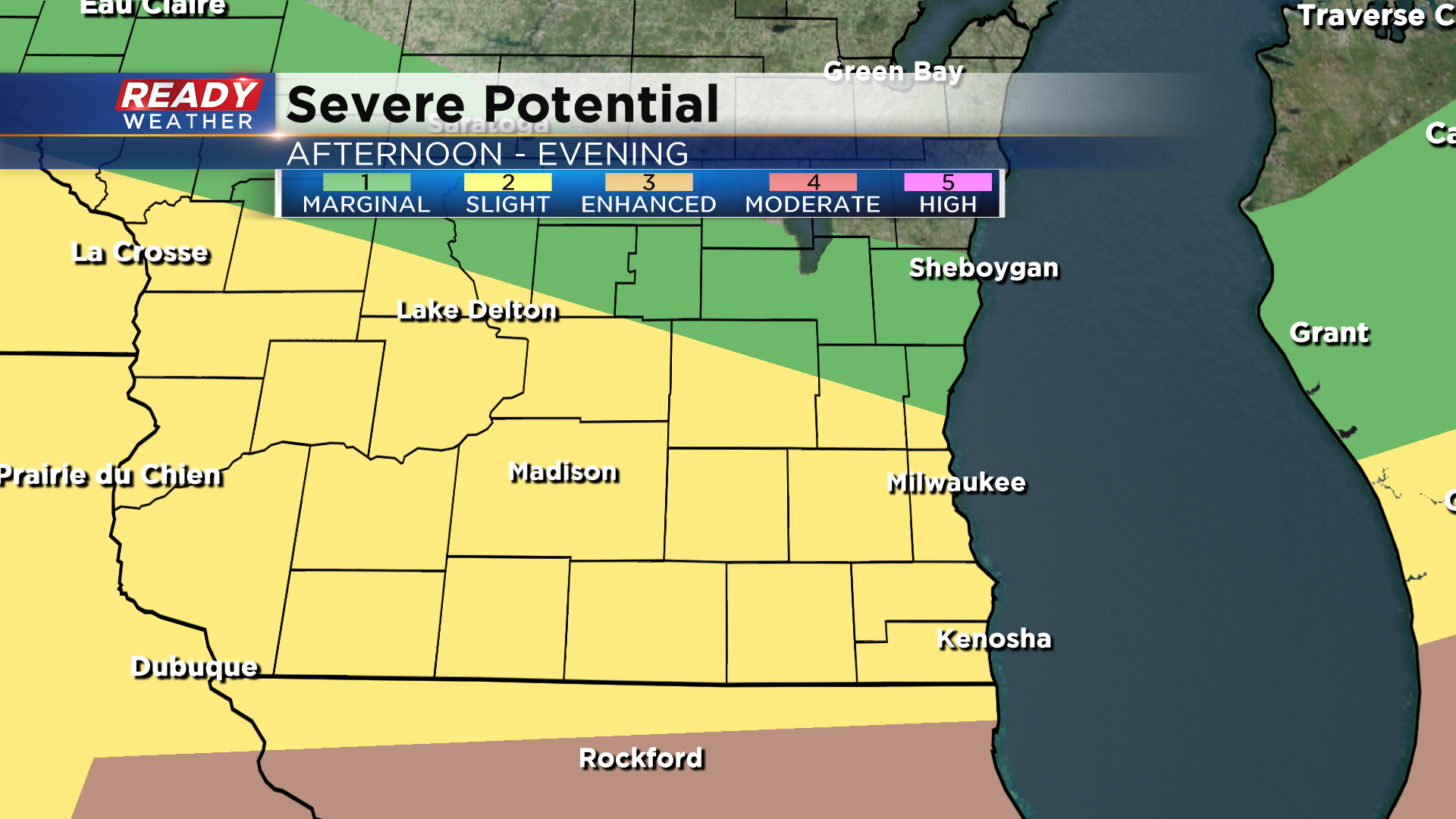 Damaging winds and hail will be the main threats if storms go severe today, along with heavy downpours. The tornado threat isn't zero, but it looks lower than it did yesterday. 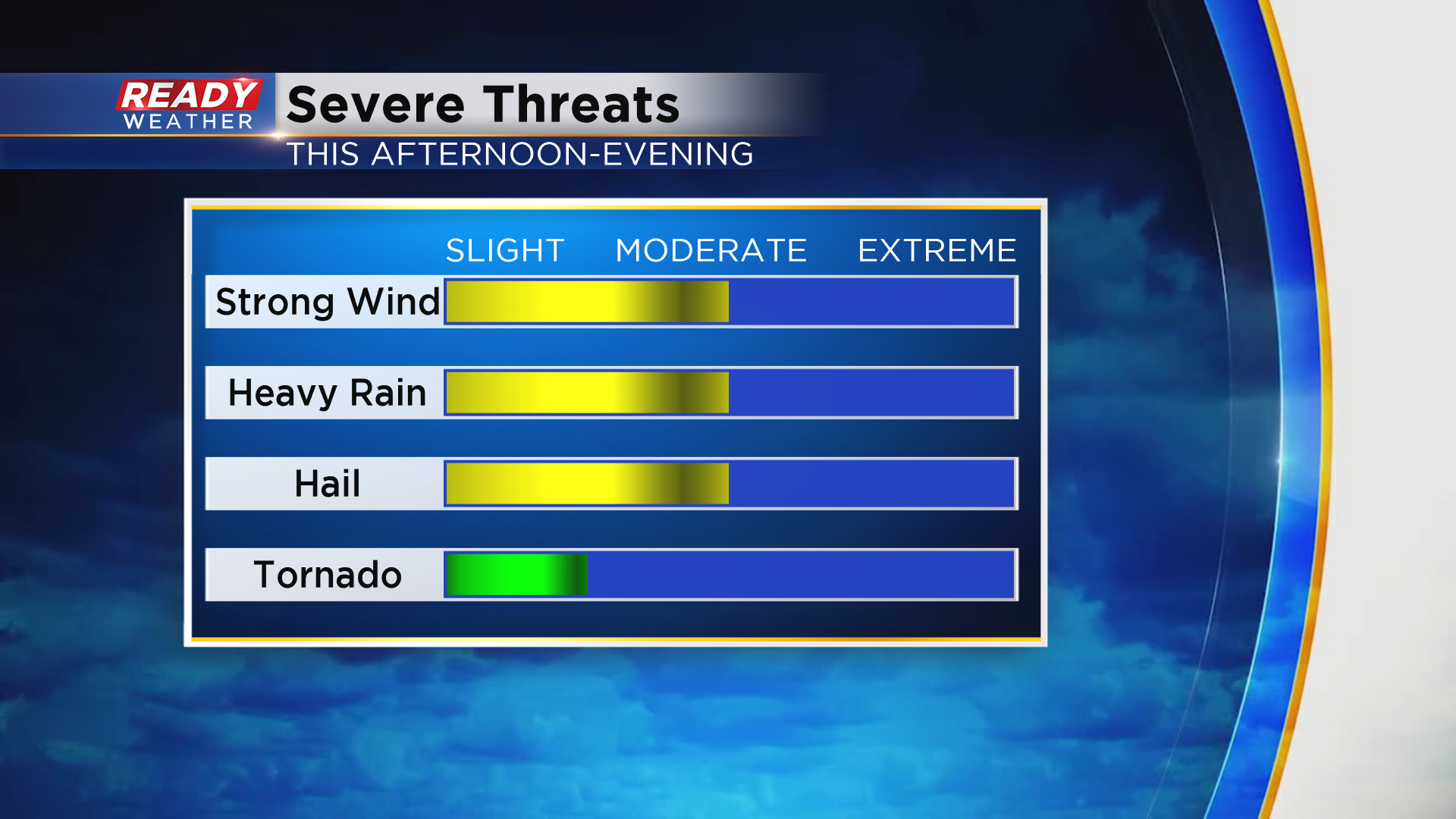 Anywhere from .25-.50" looks like a good bet for most, but anyone that sees storms could easily pick up .75-1" of rain. Locally higher amounts possible in any place that sees multiple storms. 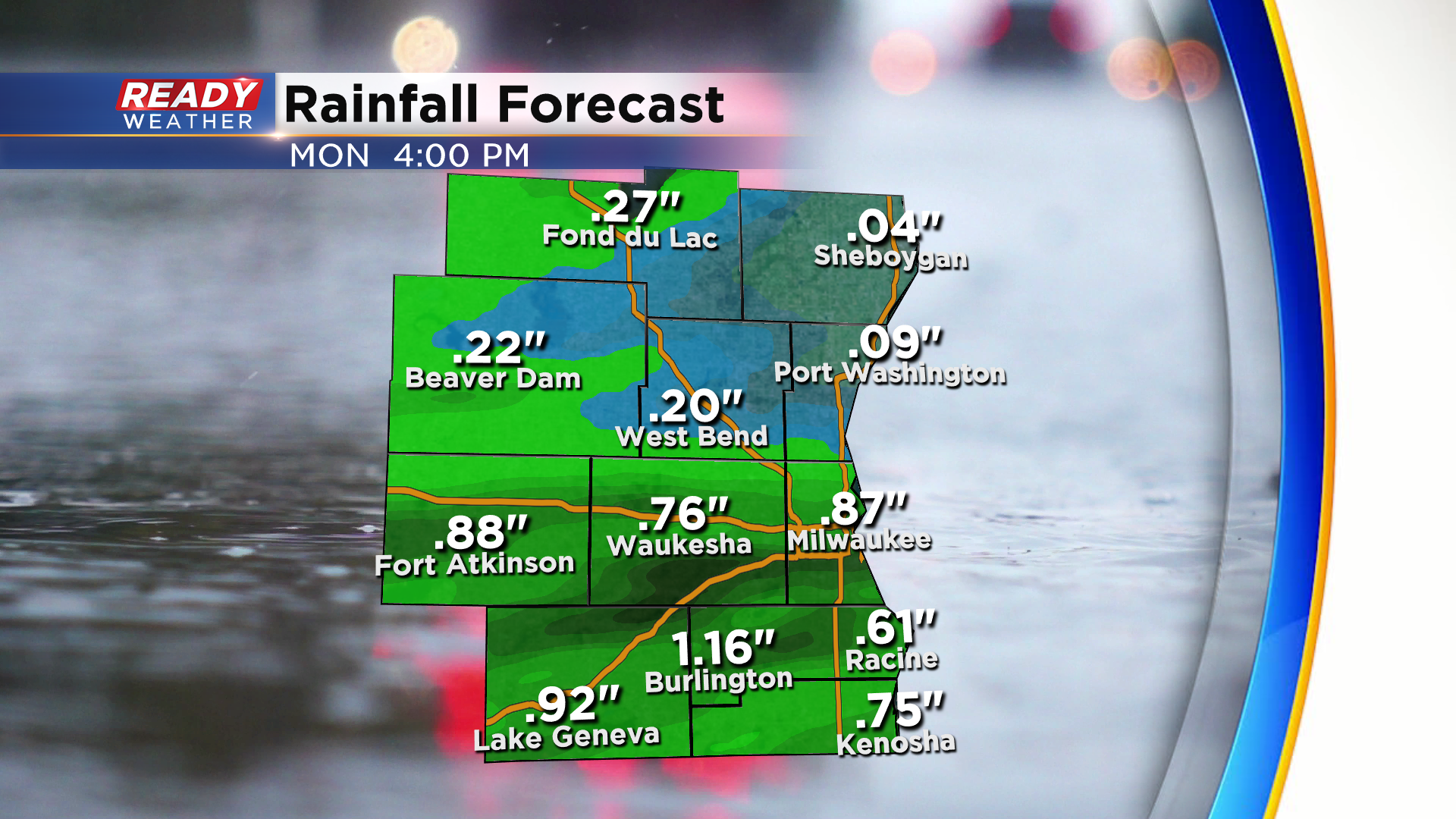 Since our severe risk today is very dependent on cloud cover and what happens with round one this afternoon, check back for frequent updates throughout the day.