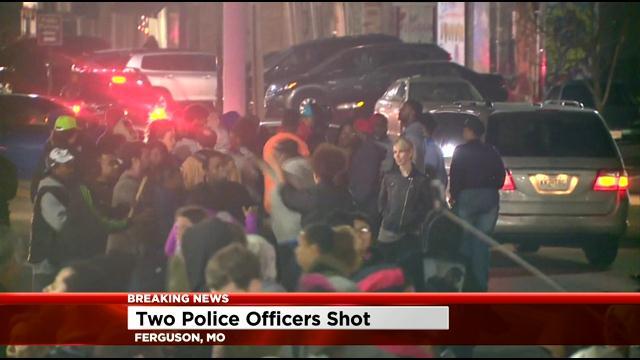 The St. Louis County Police Chief says most of the celebration was wrapping up when the shots were fired.  People were celebrating the resignation of Ferguson Police Chief Thomas Jackson.

\"[There was] Contingent of police officers assisting Ferguson and the night was fairly uneventful up until about midnight,\" St. Louis County Police Chief Jon Belmar said. \"At midnight the crowd was starting to breakup. In fact, several of the officers had left the area. To the immediate north, northwest of the Ferguson Police Department, several shots were fired at least three and two officers were struck. St. Louis County Officer was struck in the shoulder, and a Webster Groves Police Officer was struck in the face.\"

Belmar said they have no suspect descriptions and don't know who fired the shots. He says there were 60 to 70 people in the streets outside the Ferguson Police Department. He says the crowd was small compared to what they previously dealt with since Michael Brown was shot and killed. With this incident, the chief says they believe the officers were deliberately targeted. Belmar says he's reevaluating how they approach these incidents.

\"It's been very volatile in the past. That's what I talked about with sustainment. It's very difficult to sustain this without injury to the public, our community, and without injuries to our police officers. I think we need to reevaluate that and that's one thing I've been doing since my phone rang at midnight tonight.\"

The police chief says he hopes to release more information later Thursday. If anyone has information about the crime, they are encouraged to call CrimeStoppers at 1-866-371-8477(TIPS).