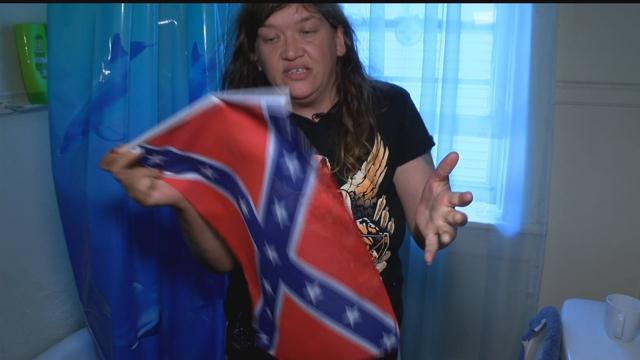 Two people arrested in Racine because of a nasty fight over the confederate flag.

Police say Tajuan Boatner and the woman exchange heated words, including the n-word.

From there, the victim tells CBS 58 Boatner went inside her home, knocked her to the ground, and took down her confederate flag.

The confrontation happened Friday afternoon at Toni Barribeau’s Racine home on Center Street when Boatner walked by and spotted the confederate flag on the window.

\"He said I know you're probably racist, can you please take it down,” said Barribeau. “I said fine, but I will probably put it in another window. No you won't. I'll make sure of it. So I went and put it in my other window.\"

Boatner and Barribeau then got into an argument.

\"I called him the n-word,” said Barribeau. “But still that doesn't mean you can put your hands on anybody.\"

Barribeau says she suffered a few bruises during the altercation.

Barribeau was also arrested and received a citation.

\"Because I argued with him,” said Barribeau. “It escalated and I got arrested.\"

\"She had an opportunity to go in the home and call police,” said Lt. Al Days.

\"It doesn't affect me as a black person,” said Lockridge. \"She been had it up. She asked me about it. Do you have any problem with the flag? Not really. It doesn't really bother me.\"

Although she says she may have handle things differently, Barribeau is keeping the flag inside her home.

\"I'm not going to say its racist and it's not racist,” said Barribeau. “They have their own opinion, and the education they have for the confederate flag.\"

Meanwhile, Barribeau says she plans to fight her citation for disorderly conduct.