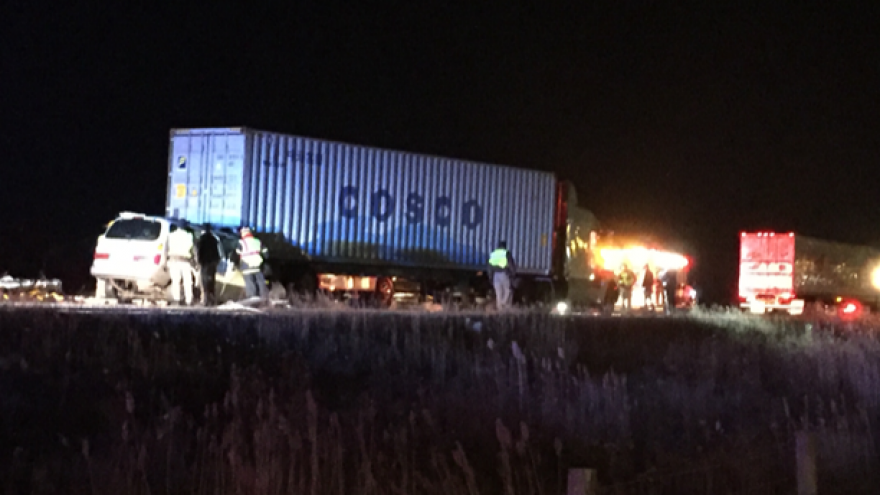 Two people were injured when a van slammed  into the back of a semi-trailer truck on I-94 near 7 Mile Road in Racine County early this morning.

According to the Racine County Sheriff's Office, the accident happened around 12:25 AM, blocking the two right lanes of southbound I-94 for about four hours. A southbound semi-trailer truck was struck from behind by a van driven by an unidentified man.  According to the Sheriff's report, the driver of the semi, a 40-year-old  Kenosha man told dispatchers that the van was wedged beneath the trailer of the semi, the driver of the van was trapped inside the vehicle and that there was a fire in the engine compartment. Deputies first responding to the scene were able to extinguish the fire.   Fire fighters from the Town of Raymond, worked to extricate the driver who was then flown by Flight for Life to Froedtert Hospital where he remains in serious condition.

The driver of the semi was taken by ambulance to Wheaten Franciscan Hospital - Racine where he was treated and released with only minor injuries.

According to the Sheriff's report, speed and alcohol appear to be factors in the crash.

Besides the  Racine County Sheriff’s Office, officers from the Franklin, Oak Creek and Caledonia Police Departments and the Wisconsin State Patrol, responded to the accident.