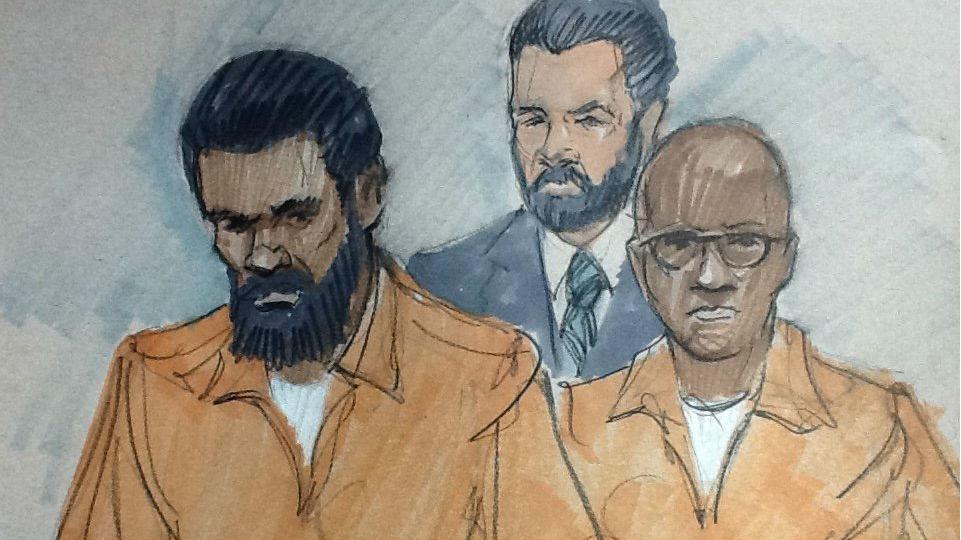 (CNN) -- An Army National Guard member and his cousin have been arrested in Illinois for allegedly conspiring to provide material support to the terrorist organization ISIS, federal prosecutors said Thursday.

The alleged plot included a plan to attack a U.S. military installation in Illinois.

In the past 18 months, the Justice Department's National Security Division has prosecuted or is prosecuting 32 cases of people attempting to travel abroad to join or providing support to terrorist groups. Of those cases, 18 allegedly involve support to ISIS.

His cousin, Jonas \"Yunus\" Edmonds, 29, was arrested at his home in Aurora in connection with an alleged plot to carry out an armed attack on an unspecified U.S. military facility in northern Illinois where Hasan Edmonds had been training.

The two U.S. citizens were charged, in criminal complaints filed in U.S. District Court of the Northern District of Illinois, with one count each of conspiring to provide material support and resources to a foreign terrorist organization.

The cousins were scheduled to appear this afternoon before U.S. Magistrate Judge Sheila Finnegan. It is unclear if they have attorneys.

After an undercover FBI informant posing as an ISIS fighter outside the United States sent Hasan Edmonds a Facebook \"friend\" request in late 2014, he began to receive private messages from him indicating that he and his cousin were willing to travel to overseas and fight for ISIS.

\"InshAllah we will complete our task or be grants [sic] shahada [Arabic for martyr] I look forward to the training,\" Hasan Edmonds is alleged to have told the informant in January. \"I am already in the American kafir army and now I wish only to serve in the army of Allah alongside my true brothers.\"

They continued to communicate over the following weeks, with Hasan Edmonds expressing concerns about Jonas Edmonds' criminal record and whether he would be allowed to travel overseas.

\"They try hard to keep people like him trapped in America,\" he told the undercover FBI employee.

\"I know several Muslims have been caught attempting the Turkey route so tell me why not many Americans take the Egypt route. I am open to either way,\" Hasan Edmonds told the informant, according to court documents.

On February 2, Hasan Edmonds contacted the undercover informant again and said his cousin was willing to carry out an attack on U.S. soil.

\"Honestly we would love to do something like the brother in Paris did,\" Hasan Edmonds stated, referring to the French terror attacks in January in which 16 people were killed.

\"Number one on my list is Mosul,\" he stated, referring to Iraq's second-largest city. \"If I find myself stuck here [in the United States], I intend to take advantage of being so close to the kuffar.\"

Jonas Edmonds this week accepted that he would be unable to travel and told the FBI informant of his intention to buy AK-47s and grenades to carry out an attack on the military facility. He would use his cousin's uniform and \"anticipated a body count of 100 to 150.\" He was given a list of officer rankings by his cousin and advised to \"kill the head,\" according to court documents.

Prosecutors said Jonas Edmonds planned to carry out the attack after Hasan Edmonds left the country.

A federal complaint alleges that Hasan Edmonds came to the attention of the FBI in late 2014. The complaints uses the acronym ISIL, or Islamic State of Iraq and the Levant.

Hasan Edmonds planned to use his military training to fight for the terrorist organization, prosecutors said in a statement. Hasan Edmonds booked airline travel to depart Wednesday from Chicago and arrive in Cairo Thursday.

The cousins presented an undercover informant with plans to attacks the military facility, prosecutors said.

\"Disturbingly, one of the defendants currently wears the same uniform of those they allegedly planned to attack,\" Carlin said in the statement.

Conspiring to provide material support to a foreign terrorist organization carries a maximum penalty of 15 years in prison and a $250,000 fine.

More than 20,000 fighters, from more than 90 countries, have traveled to the ISIS battlefield, according to the testimony of

The rate of foreign fighters traveling to Syria \"exceeds the rate of travelers who went to Afghanistan and Pakistan, Iraq, Yemen or Somalia at any point in the last 20 years,\" Rasmussen said.

Of those fighters, an estimated 3,400 are believed to have come from Western countries, including more than 150 from the United States, officials said.

A U.S. Air Force veteran, who allegedly tried to join ISIS but was turned back by Turkish authorities before he could get to Syria, pleaded not guilty earlier this month to terror-related charges in a federal court in New York.

Tairod Nathan Webster Pugh, accused of making the foiled attempt in January, was indicted by a grand jury on charges of trying to give material support to the terror group and obstruction of justice, the U.S. Justice Department said in a two-count indictment.