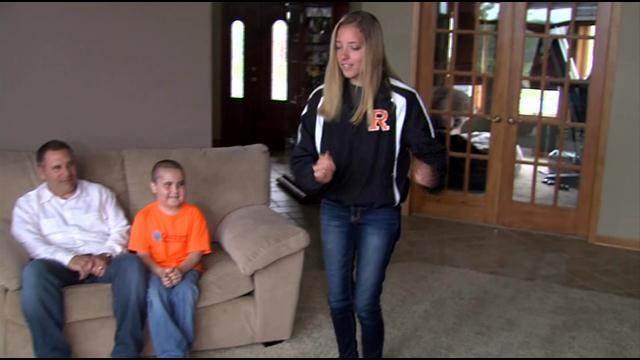 The Deppiesse and Hoopman family have a lot in common, they live doors down from each other, and they both have sons named Mason. But, in April their lives intertwined in a way they never would have expected.

When 16-year-old Elysia Hoopman and 7-year-old Mason Deppiesse started experiencing strange symptoms that knocked them off balance, and turned their handwriting into scratch, their parents became concerned.

\"He was falling a lot, and then he started walking into door frames, his handwriting changed,\" Mason's mom Michelle Deppiesse noticed.

Elysia's father Chad Hoopman was also recognizing subtle changes. \"Elysia was having degradation on the right side of her body, penmanship had significantly decreased,\" Chad said.

Both underwent MRI's in the same week and both found brain tumors in the exact same spot.

Elysia couldn't believe it was happening to her. \"I was shocked really, usually this happens to someone else.\" Mason missed playing normally with friends and classmates.

Both Elysia and Mason would undergo surgery to remove the tumors, Masons turned out to be cancerous, Medulloblastoma.

The mirror diagnosis turned both families upside down, however they would soon find comfort in each other.

\"It's kind of inspiring cause if he can do this I can do this,\" Elysia said looking back at Mason.

The last month hasn't been easy, Mason has at least 6 months of chemotherapy and radiation left, and Elysia may need a second surgery, but community support and their family bond has lessened the blow, both families say they come away feeling stronger and more inspired.

\"It's an uplifting experience I think, just to see and be able to observe that, and all the cards and messages we've been given, and it's been very comforting,\" Chad said.

\"It's incredible, they all say he's so strong when they come in, they can't believe it,\" Michelle said.

A cancer benefit will be held for Mason Saturday, June 13th at Independence Park in Cedar Grove from 11 am-7 pm.

A gofundme and CaringBridge site have also been set up to offer updates and raise money for Mason.