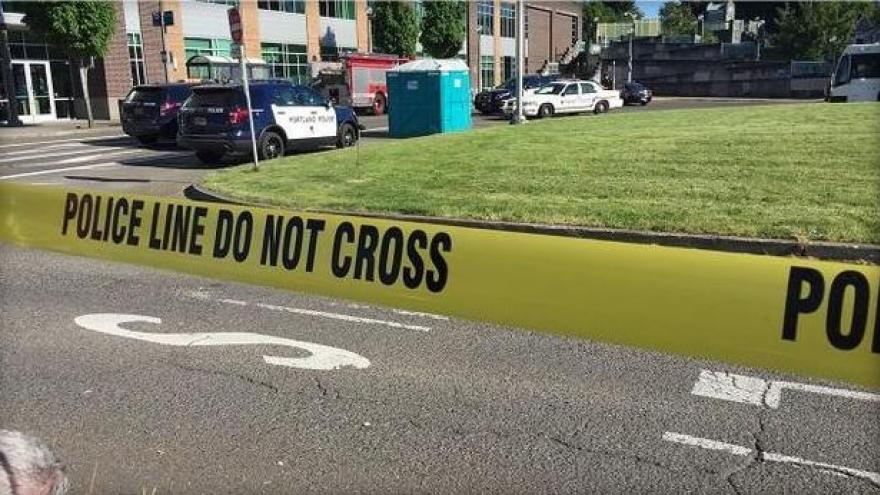 PORTLAND, Ore. -- Police say two people died and another was hurt in a stabbing on a Northeast Portland light-rail train after a man yelled racial slurs at two young women, one of whom was wearing a hijab.

The suspect is in custody, police said in a statement. His name has not yet been released.

Witnesses told CBS affiliate KOIN the suspect was yelling about hating Muslims and other things for several minutes before people confronted him and that's when things became physical.

Portland police spokesman Sgt. Pete Simpson says the man on MAX, the train system, was ranting on many topics, using "hate speech or biased language," and turned his focus on the women. According to KOIN, those two women left the scene.

Simpson says passengers intervened and were "attacked viciously." Witnesses told KOIN one of the victims was stabbed in the neck and passengers rushed to help them.

Simpson says one person died at the scene and another at a hospital. The third victim is being treated for non-life threatening injuries, police said.

According to witnesses, the suspect said he was going to get off the train at the next stop and said no one should follow him. Portland police took the suspect into custody near the Providence hospital after he ran south into the nearby neighborhood, KOIN reports.

Simpson says police don't know if the man has mental health issues or if he was under the influence of drugs or alcohol.

TriMet, which operates MAX, confirmed there was a surveillance system on train, and the footage is being given to Portland police.

"It's horrific, there's no other word to describe what happened today," Simpson said. "For the victims, our thoughts and prayers are with their families… for the witnesses, there is no other word it is simple awful."

Millions of Muslims marked the start of Ramadan Friday, a time marked by intense prayer, dawn-to-dusk fasting and nightly feasts.