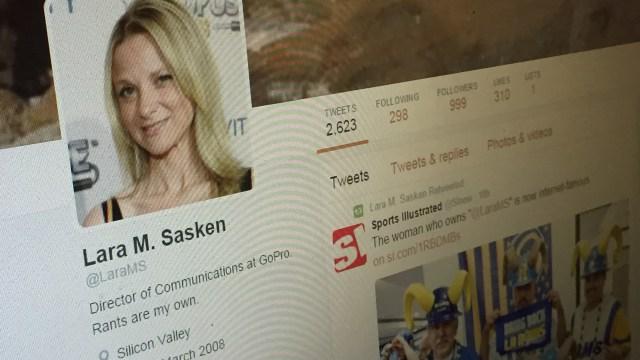 SAN FRANCISCO (CBS SF) — News of the relocation of the NFL’s St. Louis Rams back to Los Angeles has turned a spotlight on a San Francisco woman and her timely Twitter handle.

Lara M. Sasken, Director of Communication for camera-maker GoPro, goes by @LaraMS on Twitter – a user name that would fit nicely with the reborn “LARams.”

Sasken, who has had the user name since 2008, has become an Internet sensation with tweets both mistaking her Twitter handle for the football team’s and touting her anticipated payday

from the NFL should the Los Angeles Rams want to use the name. Since Twitter names are not case-sensitive, Sasken effectively owns the rights to the @LARams user name.

While many have tweeted to @LaraMS about how much she should sell her Twitter handle for, buying and selling account

names are against the Twitter’s terms of service and could result in a user getting her or his account suspended.

Sasken was scheduled to interview with KPIX 5 at GoPro headquarters Wednesday about her interesting position in the Twitterverse, but abuptly canceled the interview minutes before a reporter was to meet her, saying she no longer had time and was going to have to say no to any future