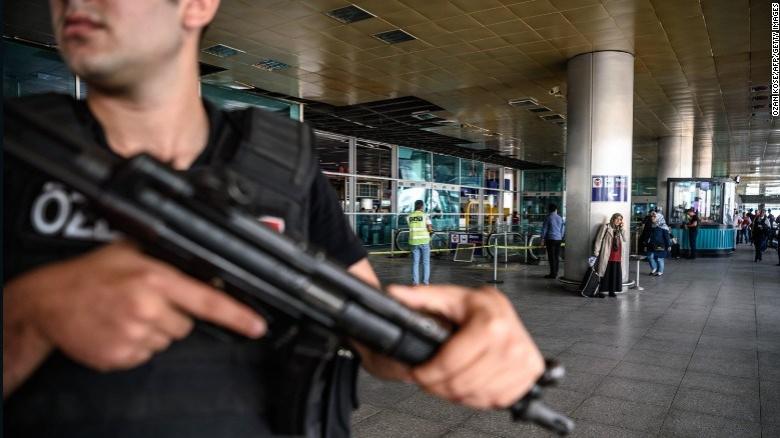 Those detained in the raids Thursday included three foreign nationals, according to state media. They did not provide information on their nationalities.

No one has claimed responsibility for the attack that hit one of Europe's busiest transit hubs and investigators have not revealed what they know about the suicide bombers.

When the attackers arrived at the Turkish airport armed with rifles and suicide bomb vests, two opened fire and detonated their bombs at the international terminal building, according to officials.

A third one died in the parking lot, where he detonated himself as terrified travelers scattered in all directions.

The attack echoed the dual suicide bombings at the main airport in Brussels in March.

Like the attack in Brussels, the terrorists took a taxi to the airport.

After the terror attack, police interviewed the taxi driver who drove the Istanbul terrorists to the airport and released him, Turkish state news agency Anadolu reported.As Turkey flew flags at half-staff to observe a day of mourning Wednesday, questions remained on who was behind the attack.

President Recep Tayyip Erdogan proclaimed the terror attack "will not divide or split our country." Officials blamed the attack on ISIS, the abhorred terror group based in neighboring Syria.By killing dozens of civilians, including women and children, Erdogan said, the terrorists are not true Muslims.

"This is not Islamic. Taking one person's life means going straight to hell," he said. "No terrorist organization will come between what we are."

Erdogan said an attack during the final days of the holy month of Ramadan shows the terrorists had no regard for faith or values.

"All information and evidence" points to ISIS, Interior Minister Efkan Ala said. "But nothing is for certain."

The Islamic State has struck in Turkey before, but has rarely taken credit for those bombings.