It's a mess outside.  For many of us it's a glaze.  By the lake, we've had milder temperatures around 33 or 34.  So mainly just west.  But in Lake Country, it's in the 20s.  So many more slick spots.  Please be careful.  The fog and freezing drizzle continue until mid morning.  Then another push of ice comes overnight into Thursday morning, at least through the morning rush. Today's Winter Weather Advisory remains until 9am then the next one goes from this evening until 6 am Thursday. 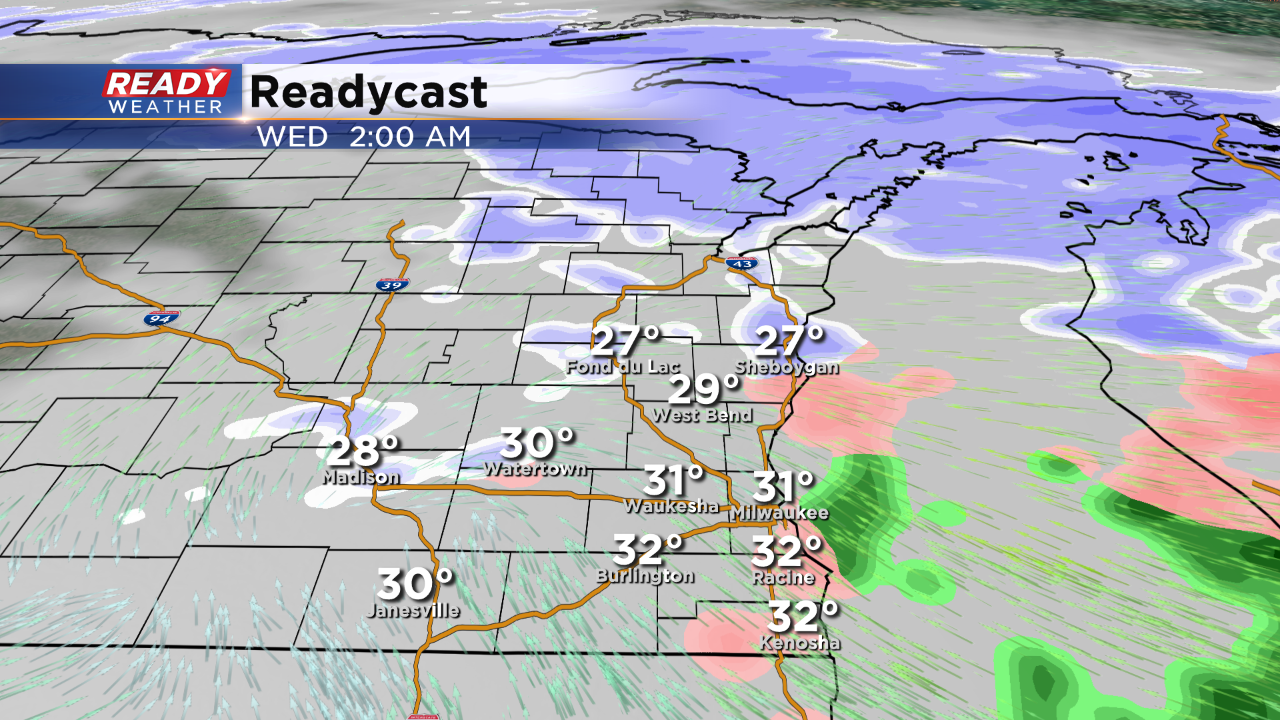 The mix of sleet and snow will continue through about midnight.  The best areas for snow and sleet will remain north of I-94 with more sleet across our southern counties.  Waukesha and Milwaukee counties will primarily experience sleet.

The bulk of the sleet and snow will move out after midnight; however, freezing drizzle will continue.  Roads will remain slick and hazardous overnight. 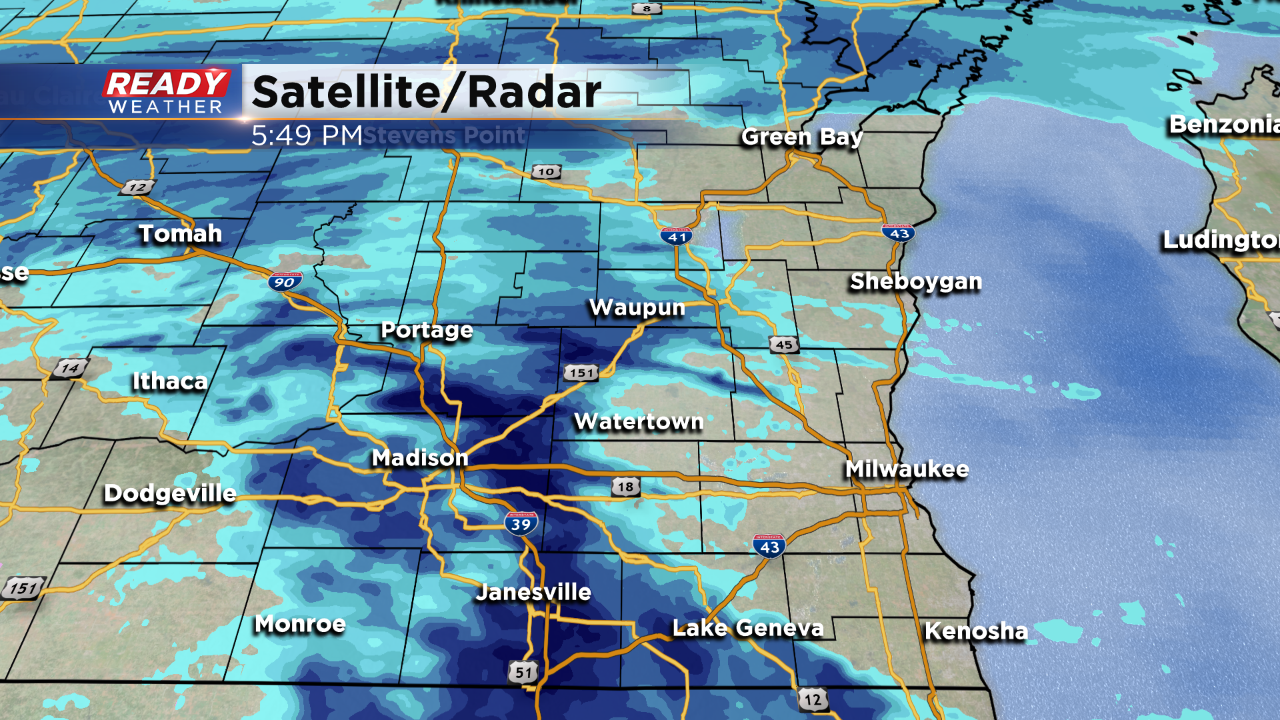 The initial burst of winter weather will be a mix of snow and sleet.  There were plenty of reports in Madison of some heavy snow.  You can see that in the dark blue radar returns.  There could be heavy wet snow to start before it transitions back over. 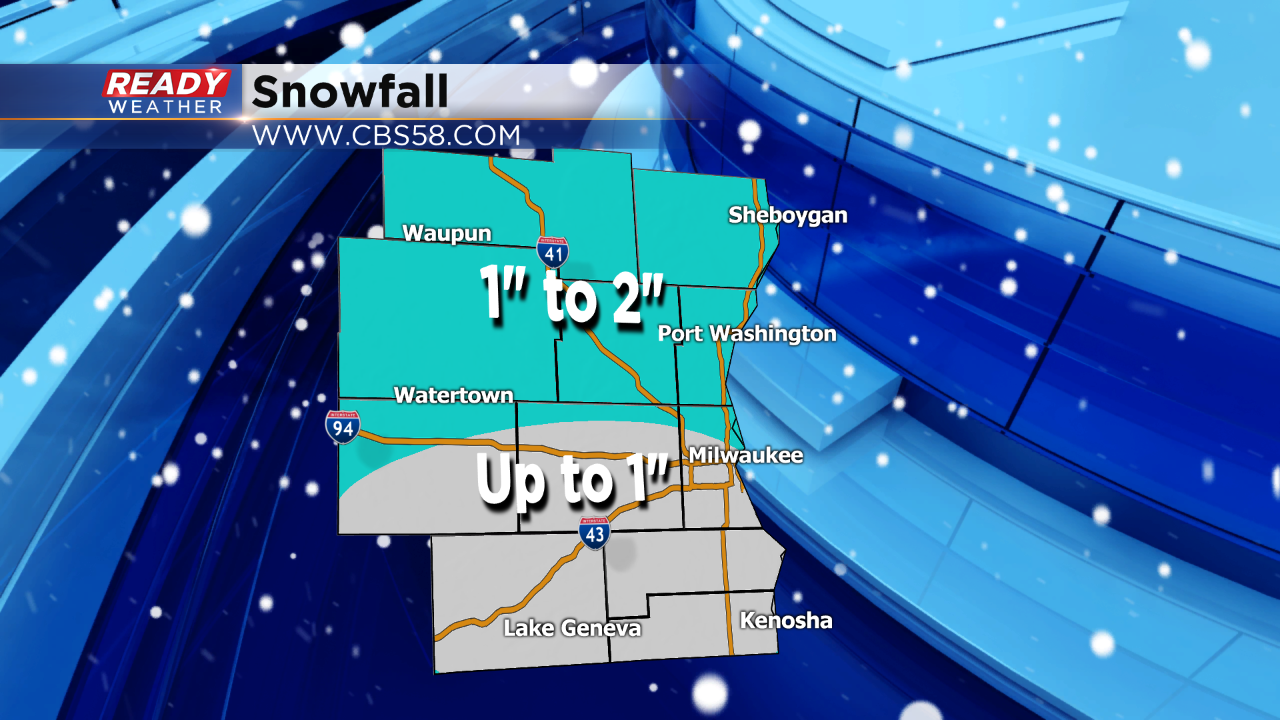 Looking over the latest short term models, there's a chance for more snow north of 94 tonight.  Those areas could pick up between 1" to 2" of snow.  South of 94 snowfall accumulations will generally be under 1" with a better chance for sleet and some freezing rain.

No changes to the forecast for tonight.  Precipitation will start to move through the area between 6 pm and 10 pm.  The mix of evening weather should consist of snow to sleet and freezing rain.  Slick roads are likely across southeastern Wisconsin into Wednesday morning.

Snow and sleet accumulation will remain below an inch.  Freezing rain up to 0.10" is possible, especially along the IL/WI border.

Major freezing rain is expected to our south across northern Illinois. Travel tonight into tomorrow morning in that area is going to be tough.

Update as of noon Tuesday...

The forecast is on track with wintry and icy wet weather starting this evening. Numerous headlines are in place across the Midwest. Here's the latest: 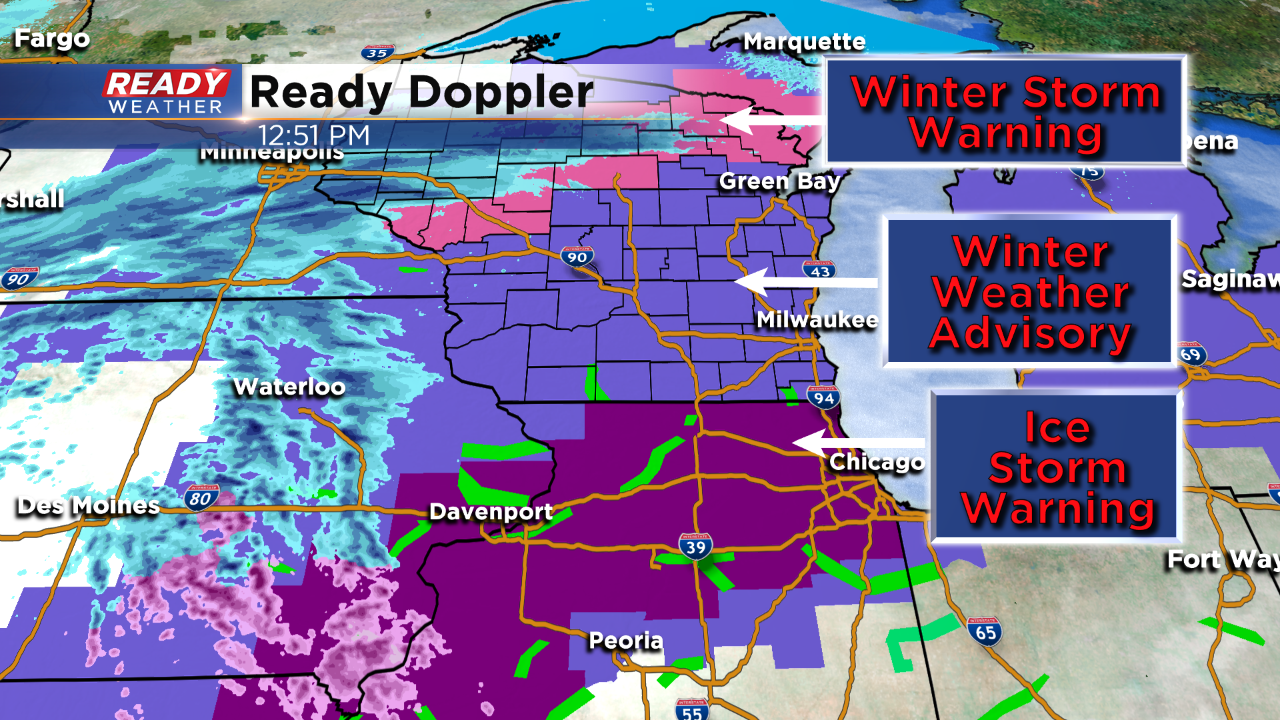 As our Advisory kicks off at 6pm, that's when our west spots should brace for snow. 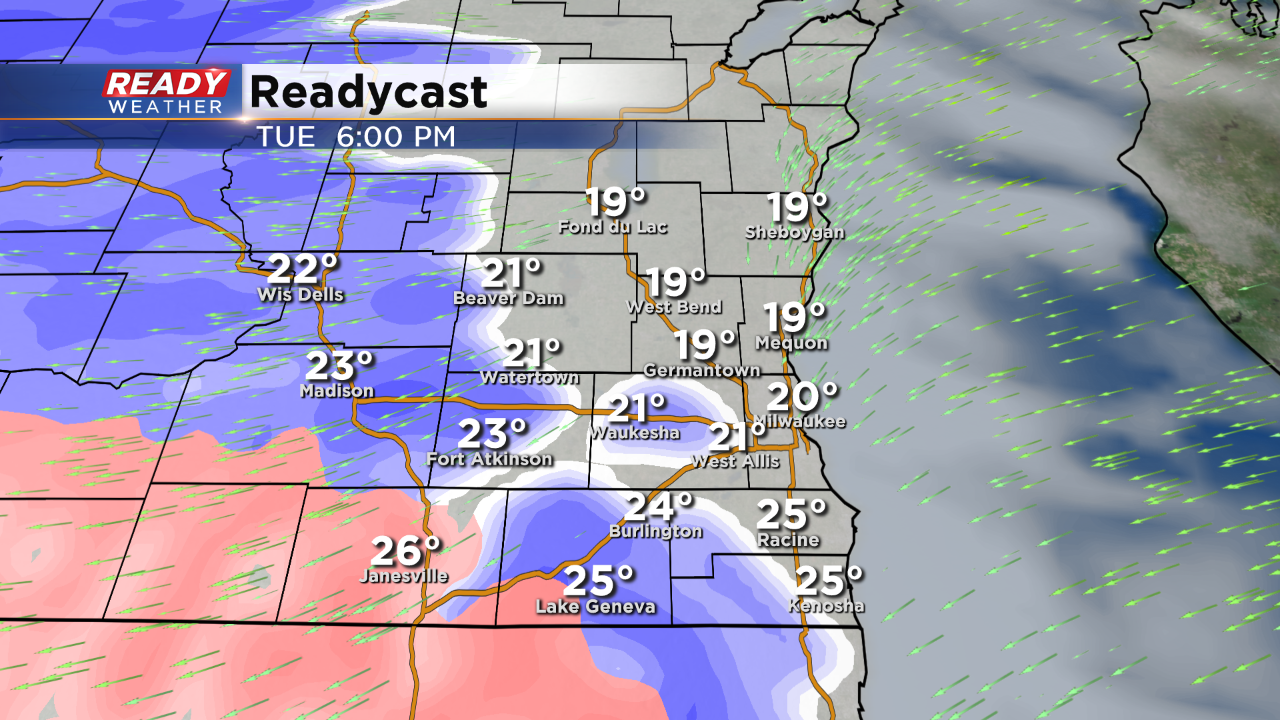 Evening snow shown in purple will transition to a snow/sleet mixture, then freezing rain, shown in pink, as the night wears on. Avoid overnight travel as icy stretches are likely. While the wet weather ends by daybreak, slick spots could still be around through your Wednesday morning commute.

Still on track for a wintry mix to come our way this evening into the overnight.  Some of us could see more than a tenth of an inch of ice, especially along and south of I-94.  To the north, it'll be mainly snow.  Watch the roads for slick spots as the Winter Weather Advisory will be in place overnight.

Looking ahead, it appears another round of ice is coming late Wednesday night into Thursday morning.  Hopefully the mix will switch to rain by mid morning on Thursday.  Then it changes back to snow by the evening hours as more Arctic air invades. 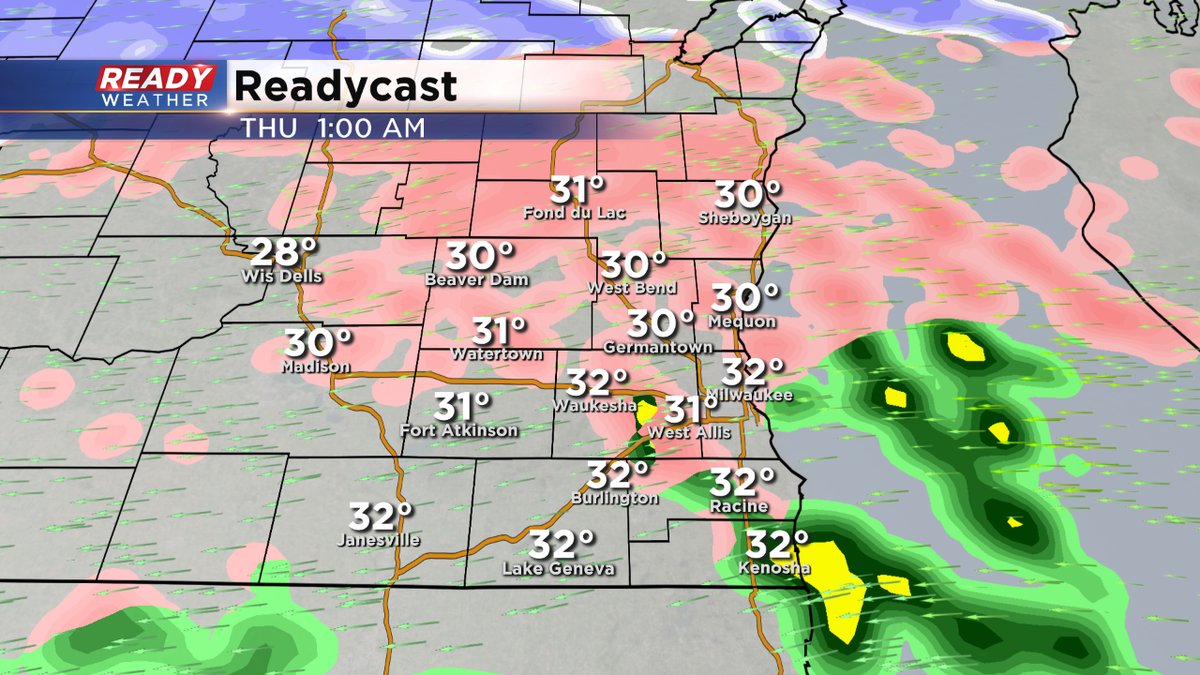 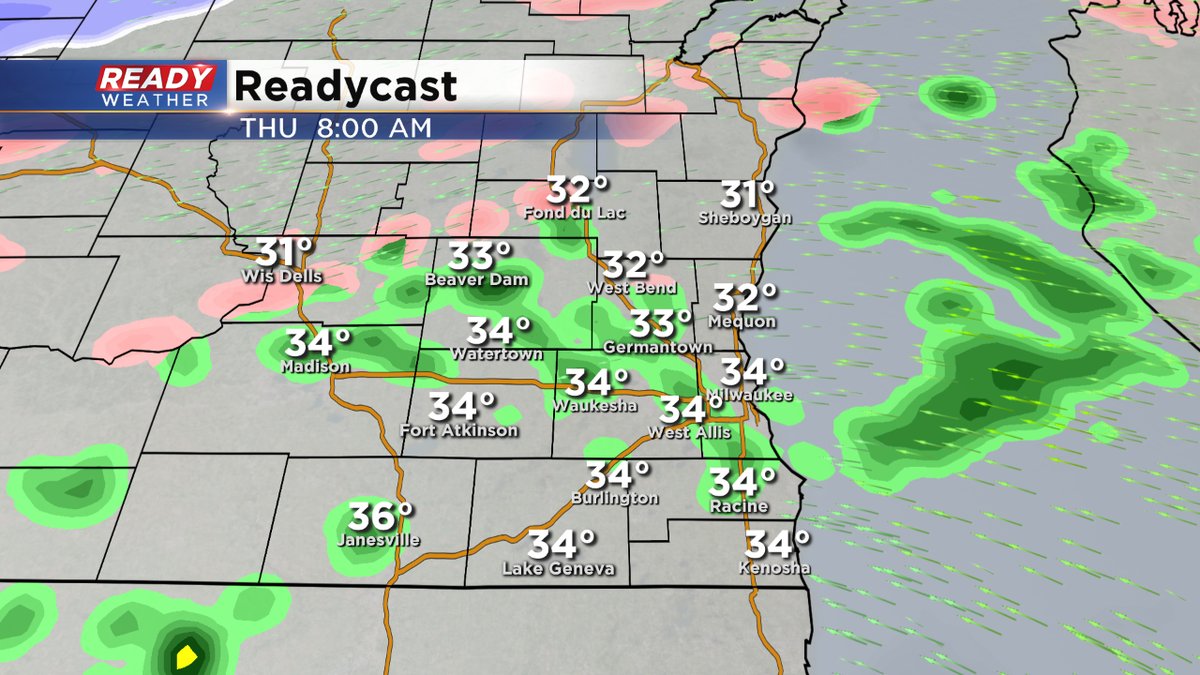 Milwaukee (CBS 58)--One of the most dangerous forms of precipitation is coming our way, starting late tonight and continuing into early Wednesday morning.  Unfortunately, that's round one.  Another one could affect us early Thursday morning.  Waves of low pressure from the southwest will throw moisture our way.  We have a very shallow layer of cold air in place near the ground.  This is allowing for a hodgepodge of wintry weather, including sleet and freezing rain.  Light snow is also possible. Some spots could see a few tenths of an inch of ice.  A slight accumulation of snow is possible.

A Winter Weather Advisory goes into effect 6 pm Tuesday evening and lasts for 12 hours.  It expires at 6 am Wednesday.  Again, I wouldn't be surprised to see another advisory into Thursday morning. 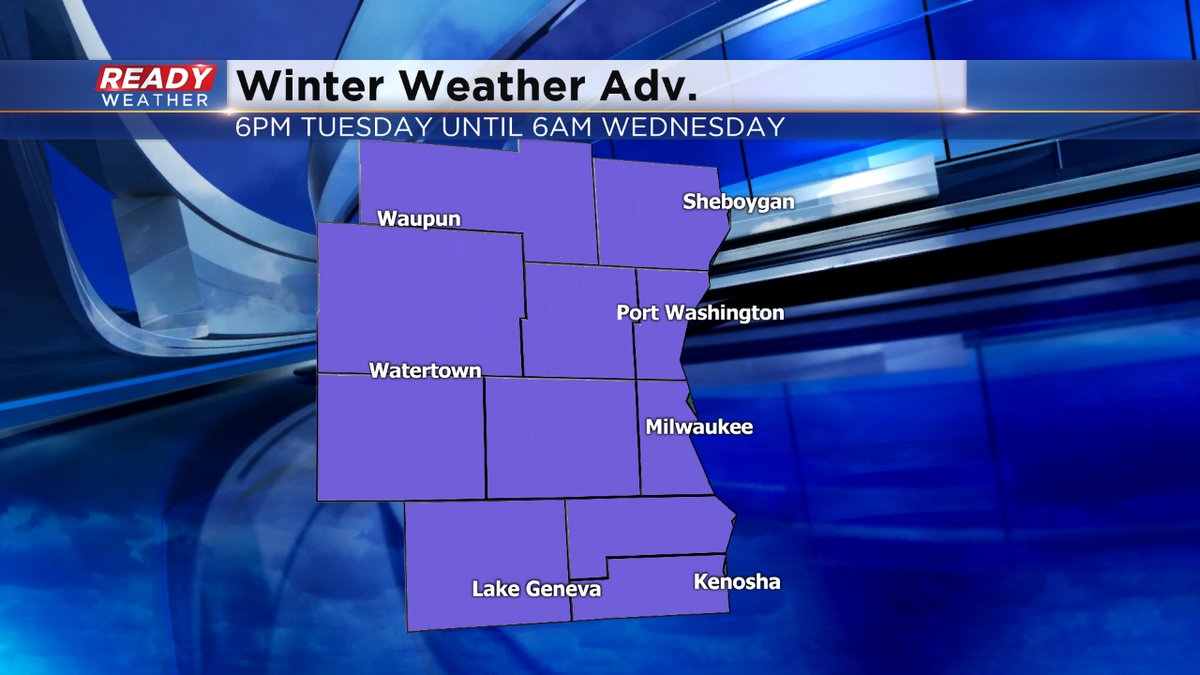 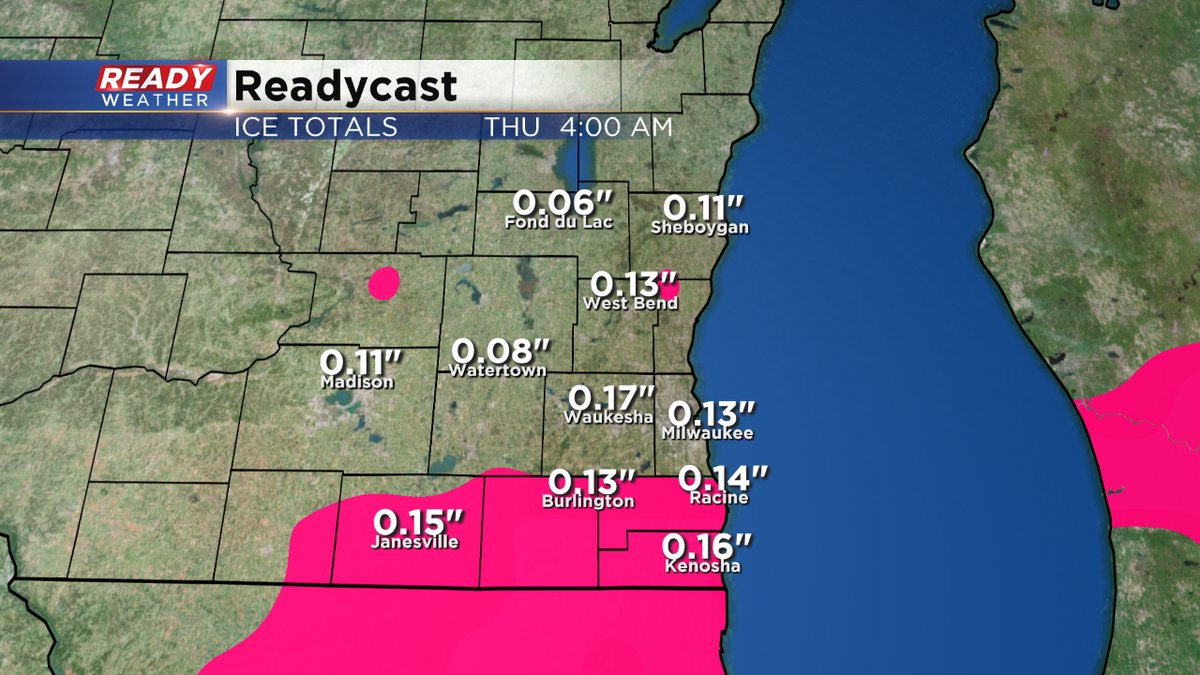 Arctic air invades the region again by Friday.  Look for highs in the teens.  The wind will make it feel much colder.  Then we have another chance of snow on Sunday.  The weather pattern stays active next week with multiple chances for snow.