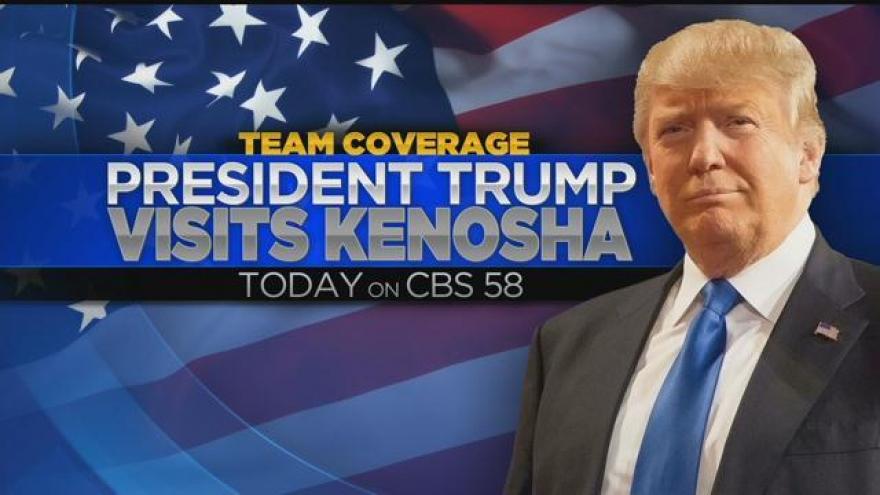 The order looks to bolster protections for certain American-made goods and calls for a review of the H-1B visa program for skilled workers, with the goal of reforming the program, senior administration officials said.

Trump will sign the executive order during a trip Tuesday to Kenosha, Wisconsin, where he will tour the headquarters of Snap-on-Tools, a Wisconsin-based manufacturer, and deliver a speech about US manufacturing.

Senior administration officials who briefed reporters Monday touted the executive order as a \"historic step\" that would help protect American manufacturers and American workers whom the administration believes have been hurt by lax enforcement of \"Buy American\" laws and employers abusing the H1-B visa program.

The executive order, though, does not take direct action to fundamentally change either portion, instead initiating a series of reviews and assessments and calling on federal departments to begin proposing reforms to the programs. The order would send a clear signal to federal agencies responsible for enforcing the programs that the current administration wants to see a more aggressive stance, officials said.

\"Both 'buy American' and 'hire American' rules have been enormously diluted over time resulting in many lost job opportunities for American workers,\" one senior administration official said, adding that groups on both sides of the aisle have called for reforms of those rules to no avail.

\"This is what America wants,\" said a second official.

On the \"hire American\" front, the executive order directs federal agencies to more strictly enforce H1-B visa laws and propose reforms to the program to prevent fraud and abuse and ensure visas are awarded to the most-skilled applicants. The H1-B visa program is intended to bring skilled workers in certain fields to the US, but the administration contended that employers have abused the program to hire workers who will accept cheaper pay than Americans.

The \"buy American\" portion of the order directs agencies to conduct a \"top-to-bottom performance review\" of the use of waivers and calls for stricter enforcement laws pertaining to the purchase of US-made goods by the federal government and the use of US-made iron and steel in projects supported by federal funds.

\" 'Buy American' is the Trump administration's highest priority when it comes to spending taxpayer dollars,\" one senior administration official said.

The CEO of Snap-On, the manufacturer Trump will visit on Tuesday, said in a statement he believes \"the President's visit emphasizes the need to nurture (US) manufacturing strength.\"

But the CEO, Nicholas Pinchuk, pointed not to measures to protect American-made goods or reforms to the H1-B visa program, but rather to more training for workers.

\"We are today in a global competition for jobs. And, the best way to make America successful in this environment is to arm our people with the technical capabilities that enable them to win that global contest for prosperity,\" Pinchuk said in a statement on the company's website. \"The upskilling of the American workforce is the seminal issue of our time. We must refocus on technical education, restore our respect for the dignity of work and celebrate technical jobs not as the consolation prize of our society, but as what they really are -- a national calling essential to our ongoing prosperity.\"

The trip to Wisconsin on Monday will be Trump's firs since becoming President.

Trump clinched victory in the state that hasn't voted for a Republican for president since 1984 in part by turning counties like Kenosha County -- which happens to be home to his chief of staff Reince Priebus -- his way.

Trump narrowly defeated his rival Hillary Clinton in the county -- by only 238 votes -- in a 47%-to-47% split. But that came after President Barack Obama carried the county in both 2008 and 2012 by 18 and 12 percentage points, respectively.

The visit to the politically crucial state that helped carry Trump to a shocking electoral victory in November comes as Trump approaches the 100-day mark of his presidency -- and Trump is eager to show signs of success and action.

Trump's move on Tuesday will not be in the form of any legislation, but rather another executive order -- a tool Trump has used repeatedly since taking office to show his political supporters that he is making good on key campaign promises without the messy fight of legislative action.

One senior administration official briefing reporters on Monday hinted at the political implications of the visit, touting Trump looking out for working-class interests and Tuesday's executive order as one aimed at \"turning the Republican Party into a vehicle to broadly represent working-class citizens.\"