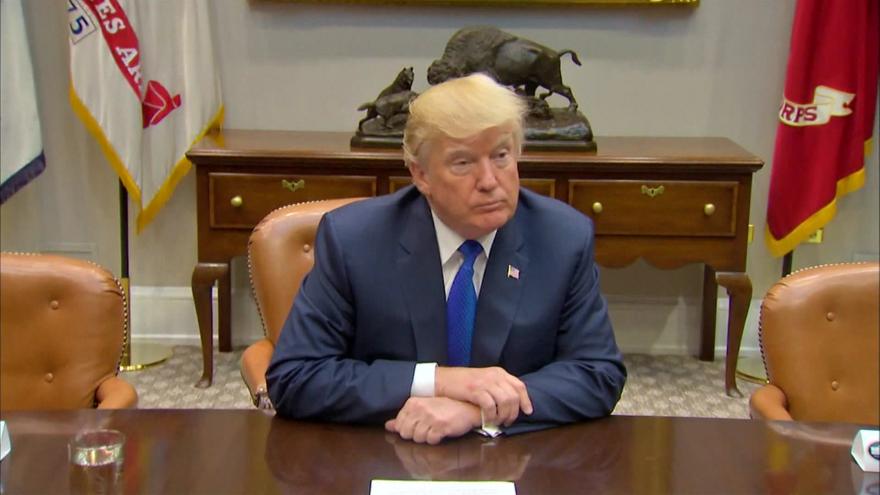 Trump is promising more penalties against the North.

And Trump tweets that he spoke with Xi about "the provocative actions of North Korea. Additional major sanctions will be imposed on North Korea today. This situation will be handled!"

A White House statement about the phone conversation says Trump made clear "the determination of the United States to defend ourselves and our allies." Trump also "emphasized the need for China to use all available levers to convince North Korea to end its provocations and return to the path of denuclearization."

Gabriel said in a statement Wednesday that "the ruthless behavior of North Korea is an enormous threat for international security."

He said that "the regime in Pyongyang has again escalated tensions in the region with its latest test."

Gabriel added that the missile launch was "proof what a threat North Korea poses for world peace."

After 2 1/2 months of relative quiet, North Korea said it successfully fired a "significantly more" powerful, nuclear-capable intercontinental ballistic missile early Wednesday. Outside governments and analysts concurred it had made a jump in capability.

Russia says North Korea's latest missile test is a provocation that has hurt the chances for settling the ongoing crisis.

President Vladimir Putin's spokesman, Dmitry Peskov, voiced hope Wednesday that all parties involved would "maintain the calm needed to prevent the situation on the Korean Peninsula from developing along the worst scenario."

Peskov condemned the North's missile test as a "provocative action that foments tensions and puts off the launch of efforts to settle the crisis situation." He added that "there is no reason for optimism."

The test took place just as a Russian parliamentary delegation was visiting Pyongyang. Leonid Slutsky, the head of the lower house's international affairs committee, said its members were conveying Moscow's concern and trying to encourage the North to "stop the destructive escalation of tensions."

Geng told reporters at a daily news briefing that all concerned parties should "act with caution and jointly safeguard regional peace and stability,"

China is North Korea's only significant ally and biggest source of trade and aid, but has backed increasingly harsh U.N. Security Council resolutions in hopes of convincing Pyongyang to return to talks.

It has called on the North to cease its missile tests and nuclear activities in return for the U.S. and South Korea suspending large-scale military exercises.

However, Beijing has rejected measures that could destabilize Kim Jong Un's regime and says military force is cannot be an option in dealing with the tensions.

Moon's office said the leaders agreed during the phone conversation Wednesday that the threat posed by North Korea's expanding nuclear program should no longer be tolerated and vowed to push for stronger measures against the North at an upcoming U.N. Security Council meeting.

Moon's office also said he told Abe that he will also ask Chinese leader Xi Jinping for Beijing to take a stronger role in pressuring Pyongyang when he visits China in December.

Moon and Abe spoke with U.S. President Donald Trump earlier in the day and reaffirmed their condemnation for North Korea's expanding nuclear program.

A South Korean airline says captains of two of its passenger planes saw flashes believed to be from North Korea's latest missile launch while flying over Japan, and reported the sightings to ground control.

A Korean Air official said Wednesday that the planes were headed for South Korea's Incheon Airport after departing from San Francisco and Los Angeles. He didn't want to be named, citing office rules.

He said the captain of the first plane reported seeing a flash to Japanese ground control about an hour after North Korea fired what it said was a new intercontinental ballistic missile. Japan's defense minister said the missile landed in the Sea of Japan at about that time.

The airline official said the captain of the second plane made a similar report four minutes later as his plane passed along the same route.

He said both planes safely landed at Incheon and the missile didn't endanger their safety because the trajectory was far enough from the planes' flight paths.

Loekke Rasmussen added that he is discussing the development with Southeast Asian leaders.

In Lithuania, Foreign Minister Linas Linkevicius called the missile test "another act of madness from the criminal #DPRK (North Korean) regime," adding "firm continuation of maximum international pressure is an absolute must to put these provocations to the end."

After 2 ½ months of relative quiet, North Korea says it successfully fired a "significantly more" powerful, nuclear-capable intercontinental ballistic missile. Outside governments and analysts concurred it had made a jump in capability.

North Korea's state media say leader Kim Jong Un ordered his engineers to launch a new intercontinental ballistic missile with "courage" a day ahead of the flight test where it demonstrated its reach deep into the U.S. mainland.

State television on Wednesday broadcast a photo of Kim's signed order where he wrote: "Test launch is approved. Taking place at the daybreak of Nov. 29! Fire with courage for the party and country!"

The North says Kim gave the order for the launch on Tuesday.

The ICBM launched early Wednesday morning was described as the Hwasong-15, with the capability to carry a nuclear warhead and with "significantly more" power than missiles it's tested earlier. Outside governments and analysts concur the North made a jump in missile capability with the launch.