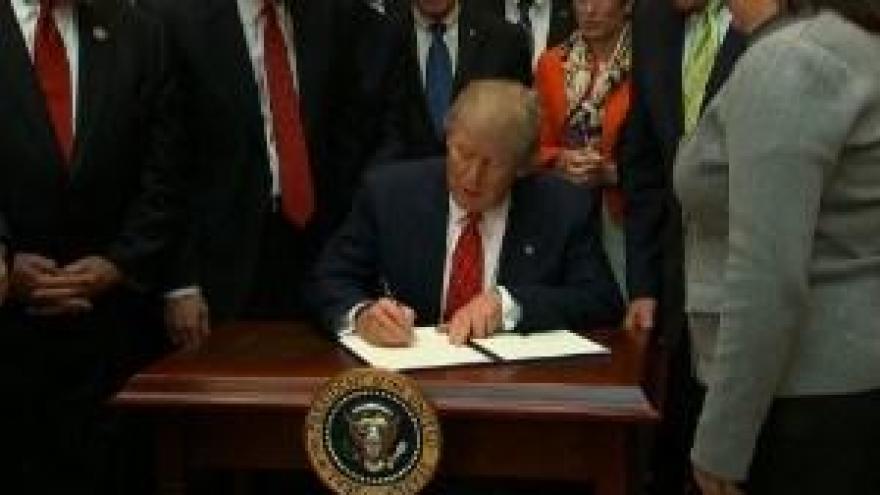 Washington (CNN) President Donald Trump Tuesday signed a measure nixing a regulation aimed at keeping guns out of the hands of some severely mentally ill people.

The original rule was part of a series of efforts taken by the Obama administration to try and curb gun violence after other efforts failed to advance in Congress.

Using the Congressional Review Act -- which allows Congress to roll back regulations imposed by the executive branch -- the Republican-controlled House and Senate voted to send the bill to Trump's desk.

The regulation, finalized in December under Obama's tenure, required the Social Security Administration to disclose information quarterly to the national gun background check system about certain people with mental illness.

While the list of eligible mental disorders is long -- ranging from anxiety to eating disorders to schizophrenia --those who would have been reported by the agency had to meet two main criteria: a) They were receiving full disability benefits because of a mental illness and couldn't work and b) they were unable to manage their own benefits, thus needing the help of a third party to do so.

The Obama administration estimated that the new rule would have affected roughly 75,000 individuals annually.

And according to a report by the Office of the Inspector General at the Social Security Administration, 81,000 disability awardees would have met the criteria in fiscal year 2015, which amounts to about 9% of the total disability awardee population.

Those affected would have been notified both orally and in writing that they could potentially be prevented from buying a gun.

Such individuals would have been allowed to request a relief from any firearm prohibitions if they could show evidence that they didn't pose a risk to public safety.

While the rule wasn't effective until January 18, compliance was not required until later this year -- in December. So it's unlikely that anyone has been affected by the rule.

Interestingly, the rule had opponents across a wide spectrum. Both the National Rifle Association and the American Civil Liberties Union spoke out against it.

The ACLU, which advocates for people with mental health struggles, said the rule reinforced a stereotype that people with mental disabilities are violent. The organization argued in a letter to members of Congress that there's no data to support a connection between receiving disability benefits and a propensity toward gun violence.

Susan Mizner, senior attorney with the disability rights program at the ACLU, also said that people with mental illnesses are more likely to be victims of violence.

While proponents of the rule argue that it only affects a limited group, opponents say that it unfairly targets the wrong people.

"75,000 people a year is a lot of people in my book," Mizner said. "And these are people who are already at the bottom of our social status. We don't need to kick them anymore."

Gun control groups and activists supported the rule because they felt it would prevent some suicides and accidental deaths.

They argued that it helped enforced laws already in the books that require mental health reporting by federal agencies, said Lindsay Nichols, senior attorney with the Law Center to Prevent Gun Violence.

"The American people and the families that are being hurt day after day by gun violence -- they deserve some due process too," said Rep. Lloyd Doggett, D-Texas.