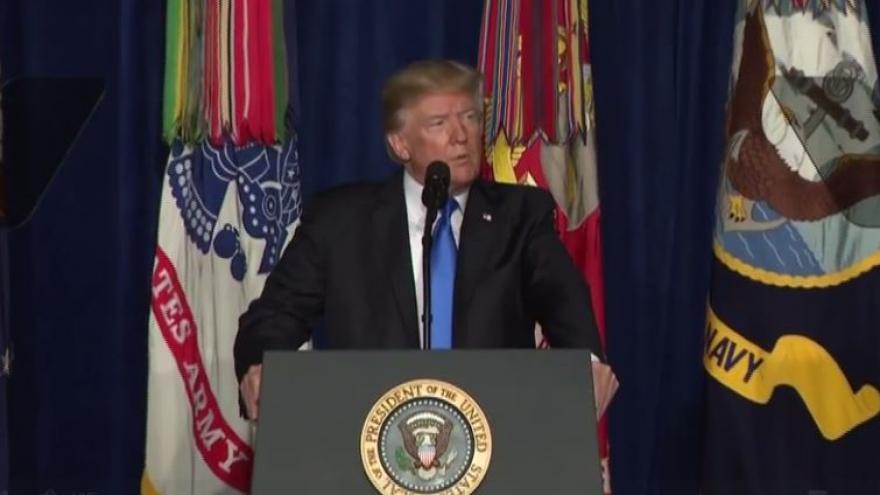 WASHINGTON (AP) -- President Donald Trump says U.S. troops "will fight to win" in Afghanistan. And he's using his prime-time address to the nation to offer a "clear definition" of victory.
Trump says victory in Afghanistan will mean "attacking our enemies" and "obliterating" the Islamic State group. He's also vowing to crush al-Qaeda, prevent the Taliban from taking over the country, and stopping terror attacks against Americans.
Trump is discussing his strategy in Afghanistan, and noting the frustration that many Americans have about the 16-year war.
----
8:18 p.m.
President Donald Trump says his new strategy on Afghanistan will be based on conditions on the ground, not timing.
The president says in an address to the nation that he will not "talk about numbers of troops or our plans for further military activities."
Trump is outlining the pillars of his strategy to address Afghanistan and the South Asia region. He says the U.S. is not about nation building, but rather, "we are killing terrorists."
----
8:15 p.m.
President Donald Trump says the U.S. needs a plan for "and honorable and enduring outcome" in Afghanistan.
He says a rapid exit would have unacceptable consequences.
Trump says, "a hasty withdrawal would create a vacuum" that the Islamic State group and al-Qaida would fill.
The president was making a rare, nationally televised address late Monday on his strategy for what is America's longest war.
Trump says his original instinct was to pull out of Afghanistan, but he shifted his view after studying the issue "from every conceivable angle."