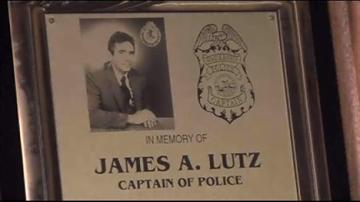 WAUKESHA-Monday marked 20 years since Waukesha Police Captain James Lutz was killed in the line of duty.

His department made sure his sacrifice is never forgotten.

Captain Lutz was fatally shot by James Oswald and his son Ted while responding to a bank robbery in Wales on April 28, 1994.

The Oswalds were arrested hours later after a gun battle with police.

Now Waukesha's police training facility is named in the Captain's honor as a tribute and as a reminder.

\"To remind officers when they see that sign,\" explained Police Chief Russell Jack, \"they come to the range, to continually remind them that they're here to train and their lives, the lives of their fellow officers and the lives of the citizens depend on their training.\"

Captain Lutz served Waukesha for 29 years before he was killed.