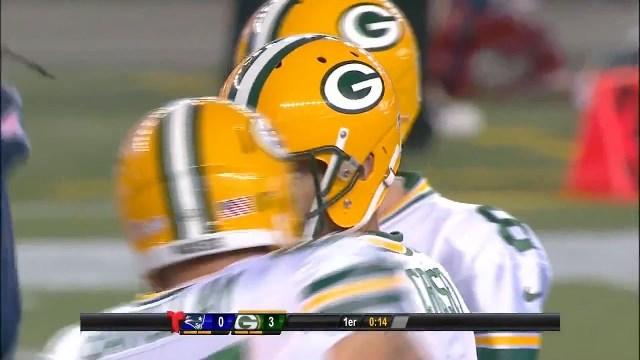 Telemundo WI's Epi Guerrero and CBS 58's Kevin Holden were reporting on the game.
And Guerrero announced a soccer style call \"Goooall!\"
CBS 58's Kevin Holden said they were really excited about that chance to bring Telemundo the Packers games.
\"Epi and I are really excited about the start of football season and even more so that we get to bring this to Hispanic community. And we are trying to make it fun,\" said Holden.
Holden said he knew Epi was going to call Goal, but he didn't know he was going to call for 21 seconds.
\"There was a point that he was not going to stop. And I thought they would go to commercial after 10 seconds,\" said Holden.
Holden said he is thrilled it has gone viral.
\"It shows the fun that we have on the broadcast, and because it's in Spanish, a lot of people don't know we do this,\" said Holden. \"I am happy people are getting to see this.\"
Holden said the first thing that happened was he  got a follow on twitter from Washington Post, and then Epi was interviewed by the Post.
Holden said he is \"floored\" by all the retweets and texts.