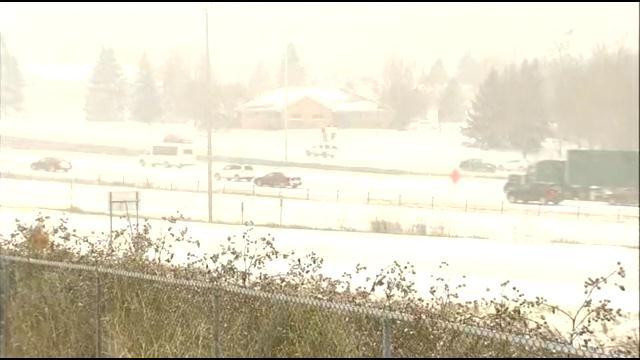 The first major storm of the winter season is affecting travel in North Central Wisconsin and it isn't even officially winter yet.

More than a foot of snow is expected in Wausau. Speeds on major roads were lower than normal, and many who did go the posted speed limit found themselves spinning out.

The Marathon County Sheriff is reporting 60 accidents since Monday morning.

In Outagamie County a school bus slid off the road and then turned over into a ditch.

Looking ahead to Tuesday, blowing and drifting snow are the major concerns.

Residents in the Upper Midwest can expect a frigid blast of air to move in with the heavy snow.

The storm actually started forming this past weekend and hit Alaska with hurricane force winds.

Several school district from South Dakota to Minnesota called off classes on Monday because of the slick driving conditions.

The City of Minneapolis started preparations months ago. Many of their trucks have already been outfitted to get around in the heavy snow.

Still, law enforcement says don't be lulled into a false sense of security because you see the plow and salt trucks out and about.

Drivers need to take it slow.

Wind gust of up to 25 miles per hour will be blowing around the snow for days.