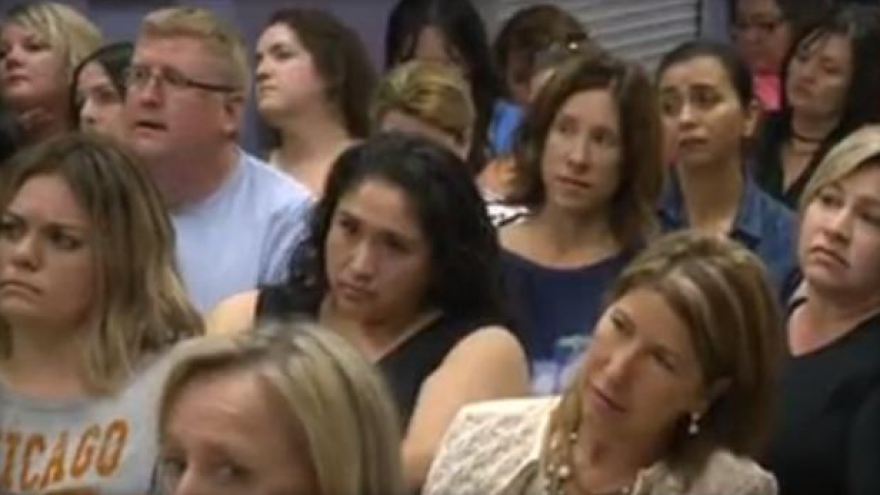 "These parents feel betrayed by the school district that they were not notified," said Karen England with the Capitol Resource Institute.

The incident happened earlier this summer during the last few days of the academic school year.

At Monday night's board meeting, the teacher at the center of the controversy spoke out. With emotions high, she addressed a packed house.

"I'm so proud of my students, it was never my intent to harm any students but to help them through a difficult situation," she said.

The teacher defended her actions to read two children's books about transgenderism including one titled "I am Jazz." She says the books were given to her by a transgender child going through a transition.

"The kindergartners came home very confused, about whether or not you can pick your gender, whether or not they really were a boy or a girl," said England.

Parents say besides the books, the transgender student at some point during class also changed clothes and was revealed as her true gender.

And many parents say they feel betrayed and blindsided.

"I want her to hear from me as a parent what her gender identity means to her and our family, not from a book that may be controversial," a parent said.

"My daughter came home crying and shaking so afraid she could turn into a boy," another parent said.

The issue was not on the agenda, so parents spoke out during public comment.

"It's really about the parents being informed and involved and giving us the choice and rights of what's being introduced to our kids, and at what age," said parent Chelsea McQuistan.

Many teachers also spoke out in support of what transpired inside the classroom. They spoke about the importance of teaching students about diversity and having healthy dialogues.

One parent said the impact on her son was extremely positive.

"It was so precious to see that he had absolutely no prejudice in his body. My child just went in there and listened to the story, and didn't relate it to anything malicious, or didn't question his own body," she said.

"When we head in the direction of banned books or book lists, or selective literature– that should only be read inside or outside the classroom, I think that's a very dangerous direction to go," said 7th grade teacher Kelly Bryson.

The district says the books were age-appropriate and fell within their literature selection policy. Unlike sex education, the topics of gender identity don't require prior parental notice.

In a statement during the board meeting, the district said: "As indicated by Superintendent Robin Stout in a communication last week, staff will be engaging parents and teachers in discussions about how materials outside our curriculum will be addressed in the future."

The large discussion has compelled the board to put the item on the next month's agenda.