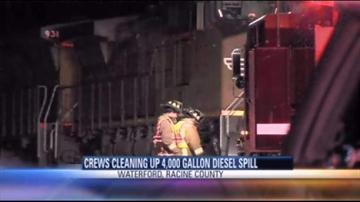 TOWN OF WATERFORD -- Firefighters and hazardous material crews spent the overnight hours clearing a diesel spill of near 4,000 gallons in Racine County.

Fire officials say the Canadian National train was traveling through the Town of Waterford near Honey Creek Road and High Drive just before 10 p.m. Sunday when it hit debris on the railroad.

Town of Waterford fire officials say they were able to recover about 1,600 gallons of diesel fuel, but the remainder soaked into the ground.

Officials with the Department of Natural Resources were on the scene to make sure the fuel didn't contaminate a nearby river, located about a mile away from the spill.

The spill happened in a rural part of the town and there's no immediate threat to people or water, officials say.

A spokesperson for Canadian National says the mixed freight train was traveling to Green Bay from Gary, Indiana.

Canadian National environmental personnel were also on hand throughout the night working with local officials.