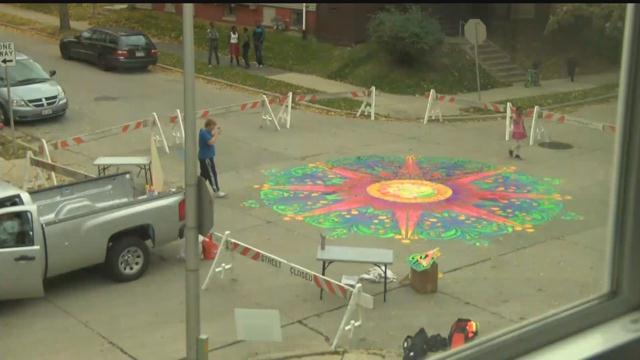 Let's say you're driving down the street when all of a sudden you spot a giant flower sitting in the intersection in front of you.

Of course, you'd probably slow down.

That's exactly the desired effect of a new mural in Milwaukee's Washington Park neighborhood, organizers of the "Brush Benefit" said.

Armed with cases of spray paint and stencils that could cover a trampoline Lee coordinated dozens of children and adults who came out to help decorate the intersection.

This was her eighth project of the summer.

"We call them International Peace Symbols. The project is called Peace in the Streets," Lee said, referring to the flower-like multicolored design covering most of the pavement in the area.

"With kids you're not always going to get a professional result but it's a beautiful end piece. And I think the stencils allow for a little overspray," Lee said.

One of the children Lee worked with was a fifth grader named Jayviona. The little girl talked about the learning curve for spray painting.

"She says you need to go closer. Don't color on the board. Smooth creases," Jayviona said.

"It's pretty and it's my first time doing it," Jayviona said.

Flanked by her friends, Jayviona also said she plays with with neighborhood kids a lot on or near the street.

"They drive fast. Sometimes they slow down," Jayviona said, talking about drivers in the area. A few vehicles squealed their tires while turning around at the closed intersection even during the event.

"Over 83% of the residents when surveyed in this area said that speeding and traffic was an issue," Paula Butler, community development strategist for Milwaukee's Habitat for Humanity, said.

Habitat for Humanity is in the middle of a five year revitalization program in the Washington Park Neighborhood. The group plans to spend about $20 million in projects during that time, Butler said.

City workers installed a nearby speed bump just this week in response to calls from community members.

The mural could work in the same way, Butler said.

"It will be an indirect effect on traffic. It's called traffic calming," Butler said.

"So kind've when folks see it from a distance it's not something you would normally see so it forces them to slow down. And it also reminds folks that this is just a place where really great people live," Butler said.

Another important part of this was that is was a collaborative, hands-on piece - something for which neighbors can be proud, Lee said.

"After cars start getting used to it they do start to drive over it. People who have worked on it will generally never drive over it," Lee said.

The event was organized by Tempo Milwaukee - a womens group involved with improving the community.