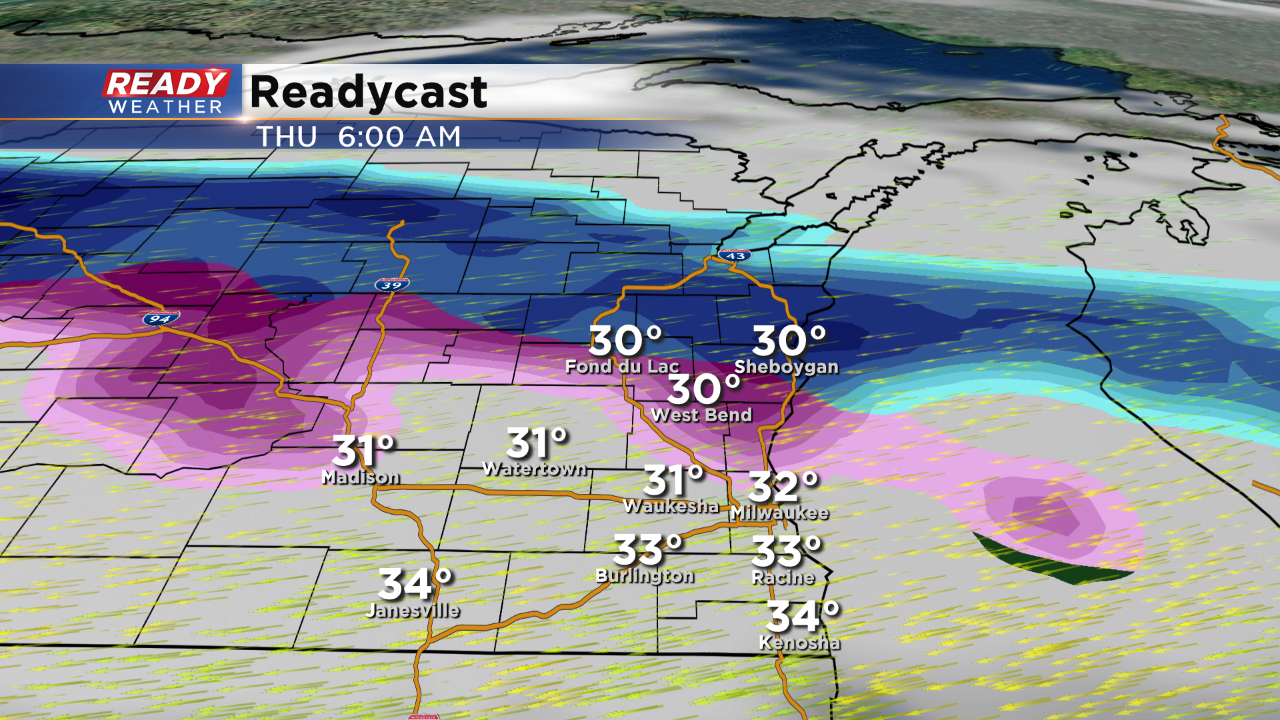 The wintry mix will continue overnight.  Snow, freezing rain, and even drizzle is possible.  After 3 am the wintry mix band will move further north.  There will be pockets of temperatures near 32, so slick spots are possible.

By tomorrow morning most areas should be quiet.  Sheboygan and Fond du Lac counties could still have a lingering mix. 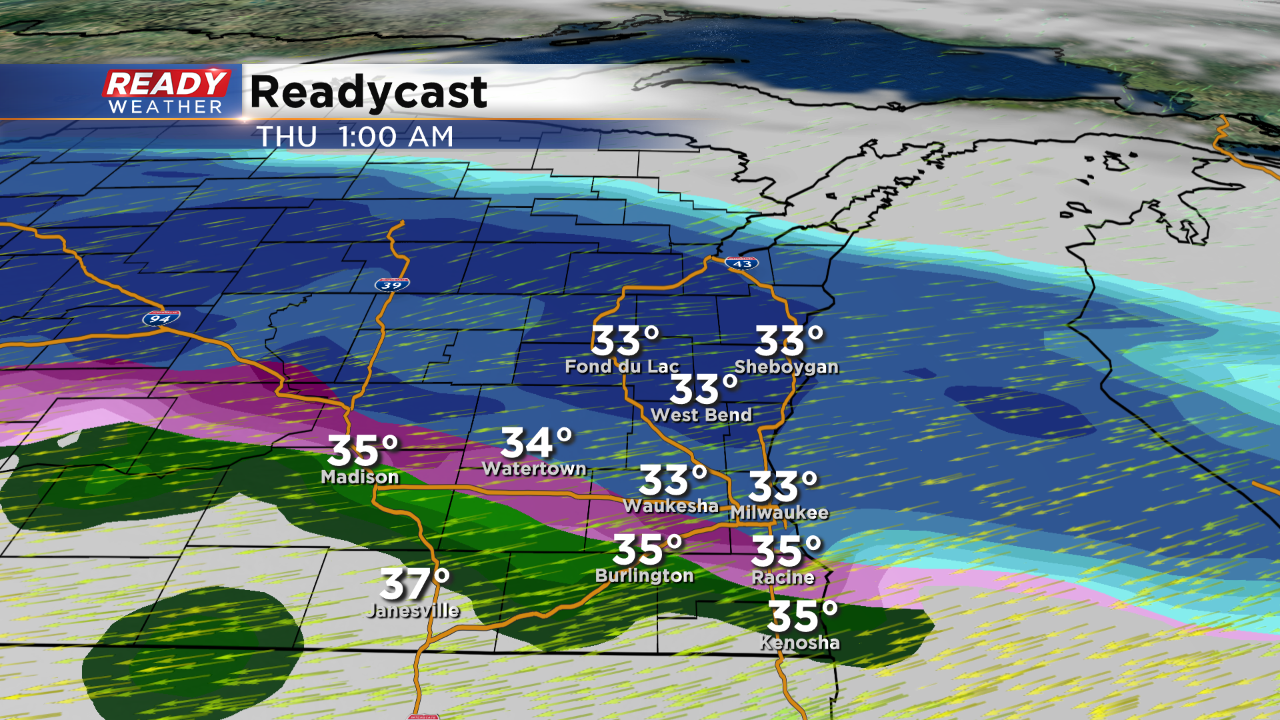 Snow will continue to lift northeast over the next several hours.  By 10 pm the snow will move north of Milwaukee.  Many areas have already picked up 1" to 2" of slushy snow.

We still feel like the best accumulation will occur within the advisory north of Milwaukee.  Most of those areas will get 2" to 3" of snow.  Slick roads after sundown could impact the morning commute. 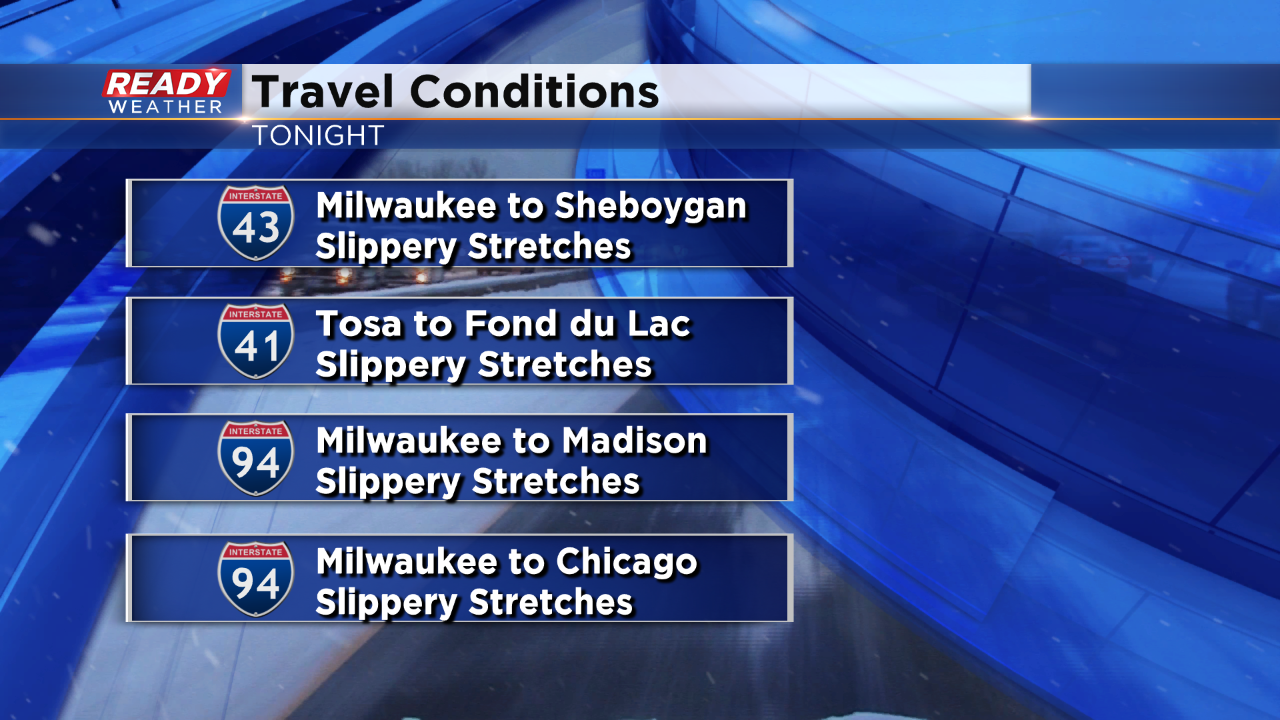 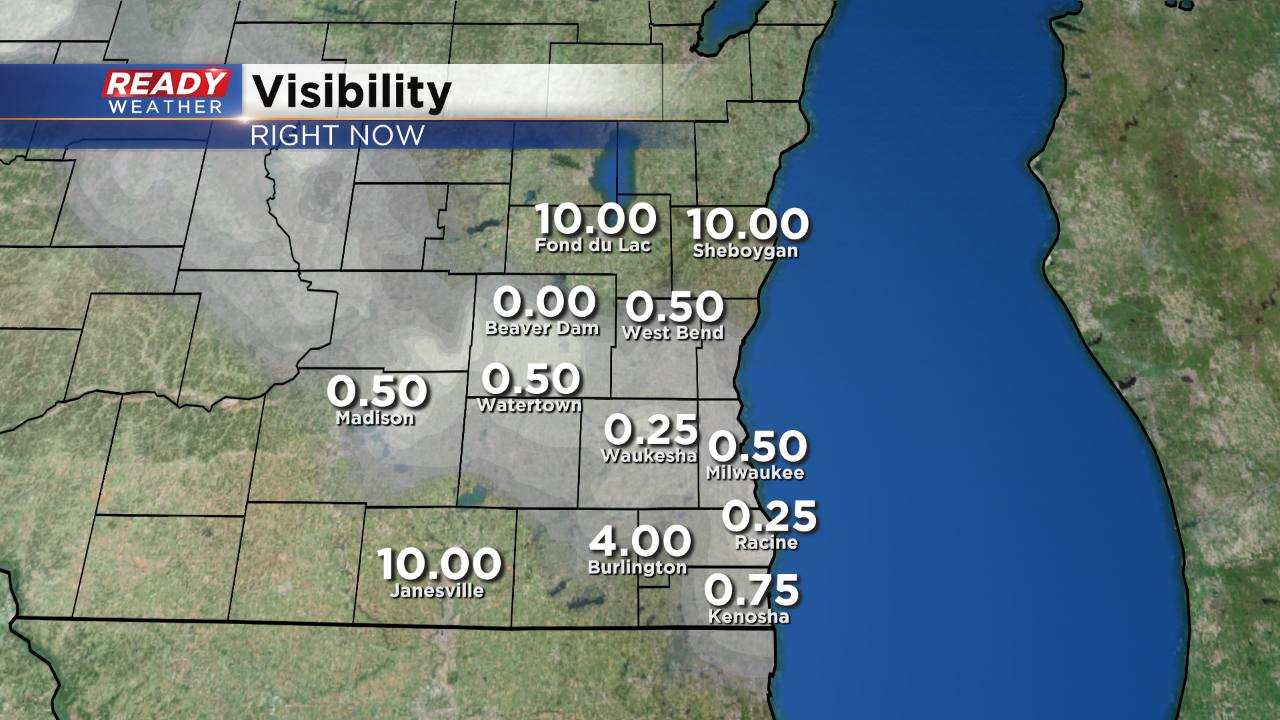 Very heavy snow is falling across southeastern Wisconsin.  Visibility has really taken a hit.  The NWS has now moved up the start time for the winter weather advisory.  Most of the snow will accumulate on grassy surfaces; however, some areas near 32 could experience some slick spots.

Slippery stretches are being reported across the area. 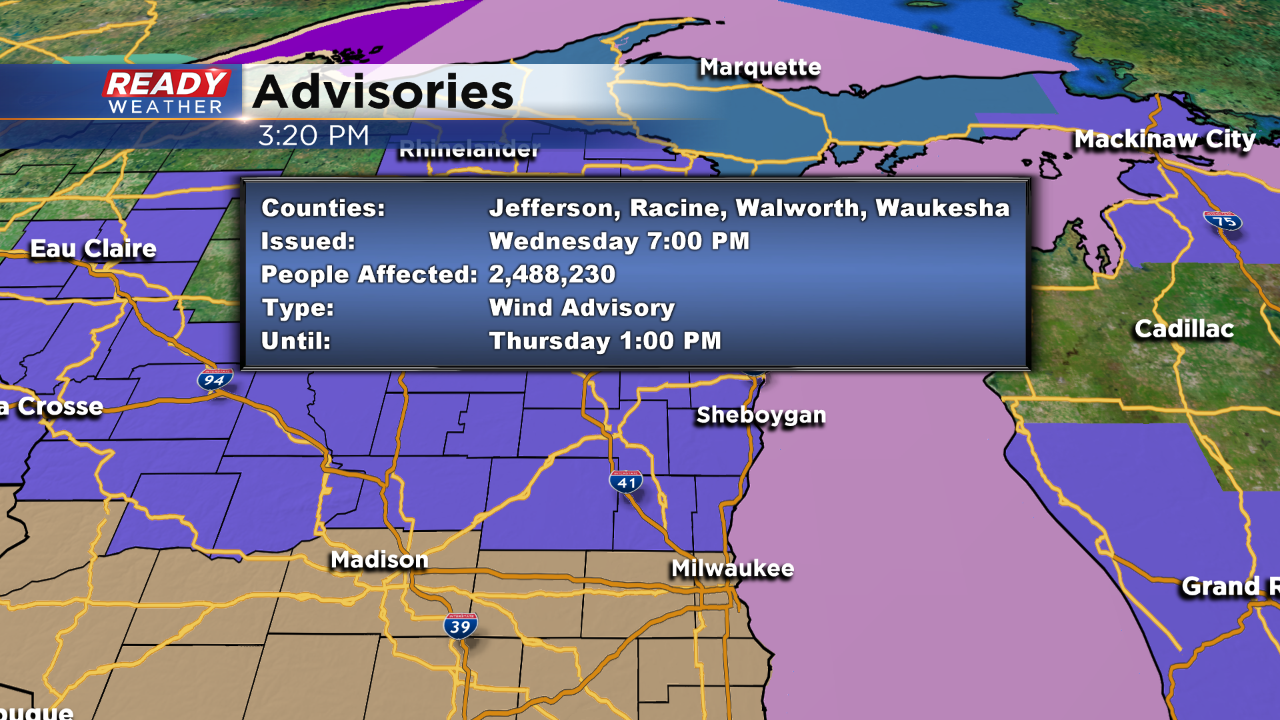 The winds tonight into tomorrow will quickly increase between 20 and 30 mph.  Wind gusts over 40 mph are possible.  The NWS has issued a wind advisory for Waukesha, Milwaukee, Jefferson, Racine, Kenosha,and Walworth counties from 7 pm till 1 pm Thursday.

The winter weather advisory has also been extended until 1 pm on Thursday. 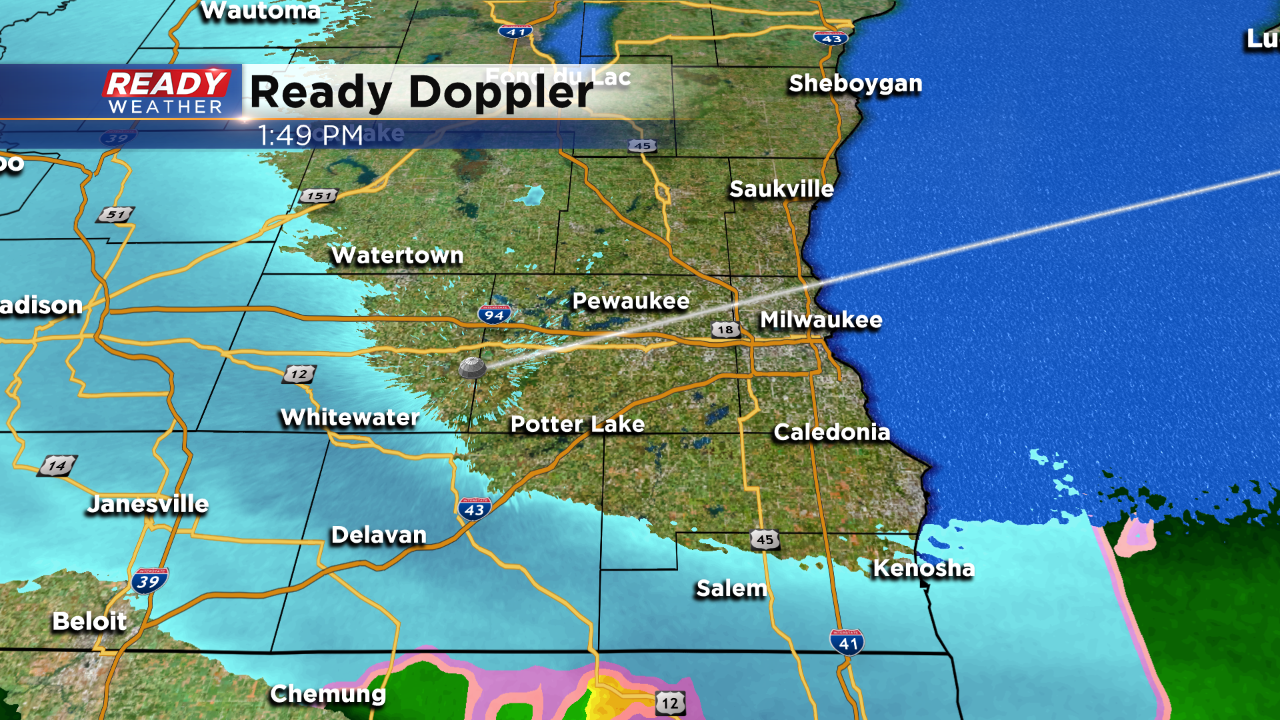 Snow is now falling across our southern and southwestern counties.  The trend will be for that band to move northeast during the afternoon and evening.  No changes to the advisory have been made.

A quick inch on grassy surfaces is possible this afternoon; however, roads should remain wet.  The greatest accumulation is still forecast north of Milwaukee later tonight.

Snow and wintry mix is currently just west of a line from Baraboo through Madison and Janesville and moving east. By 3 p.m. most of the area should be seeing some type of wintry mix precipitation then becoming more snow and mix north and mix and rain to the south as the evening goes on. 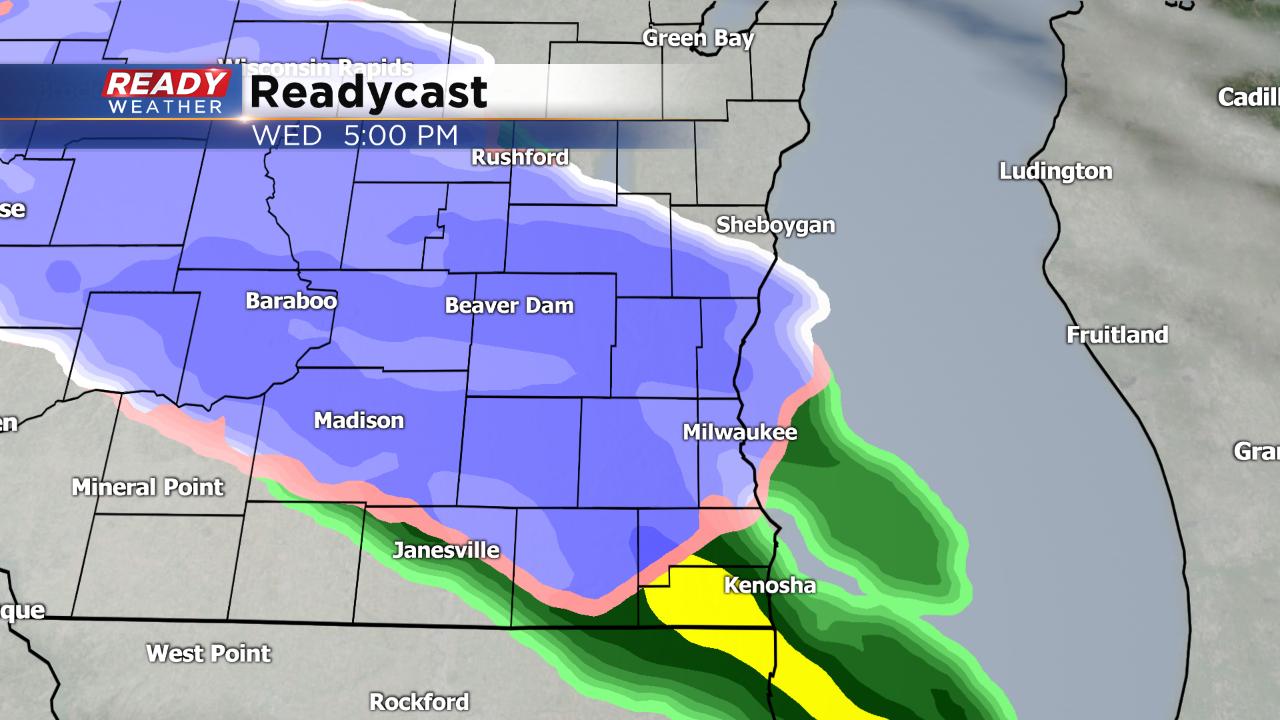 Most of the snow accumulation will stay on grassy surfaces, especially early with road temperatures well above freezing. As the sun goes down road temps will cool and slushy snow may be possible. No major change to the snow forecast with little to no accumulation in southern spots and up to 4" for areas north of I-94. 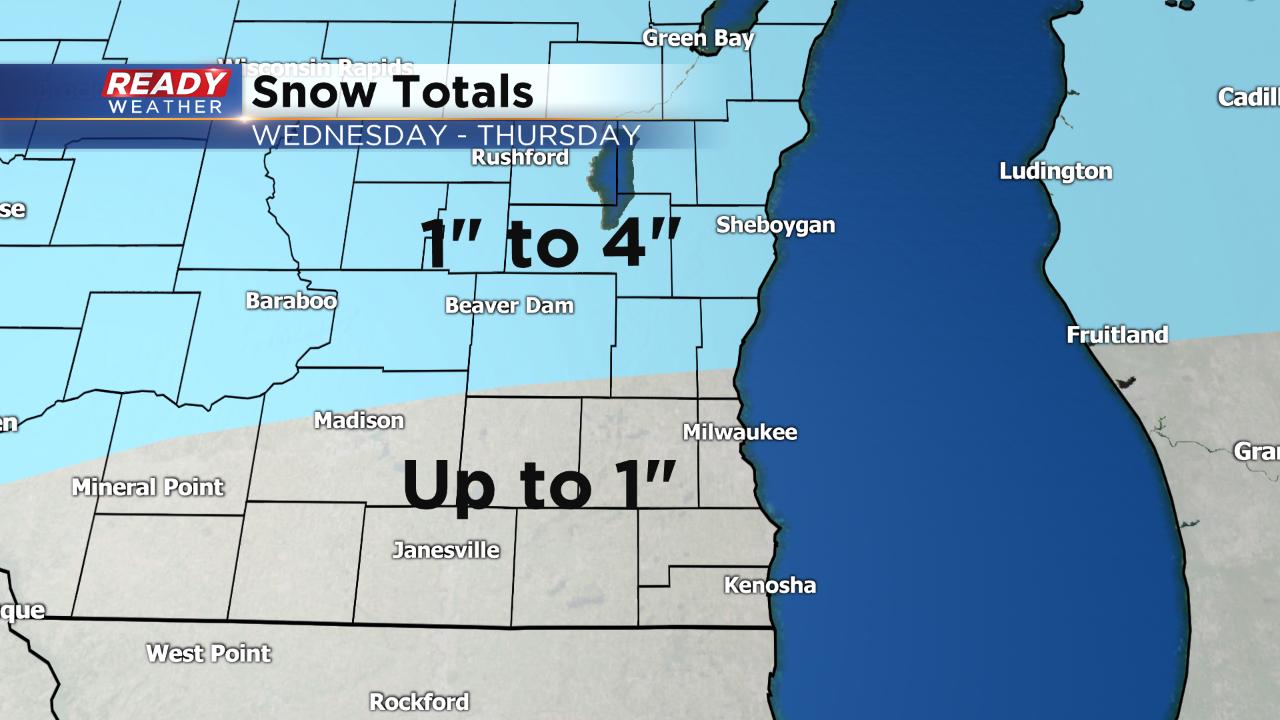 The Winter Weather Advisory for our northern half of counties has been pushed up a couple of hours and now starts at 7 p.m. ending at 10 a.m. Thursday. 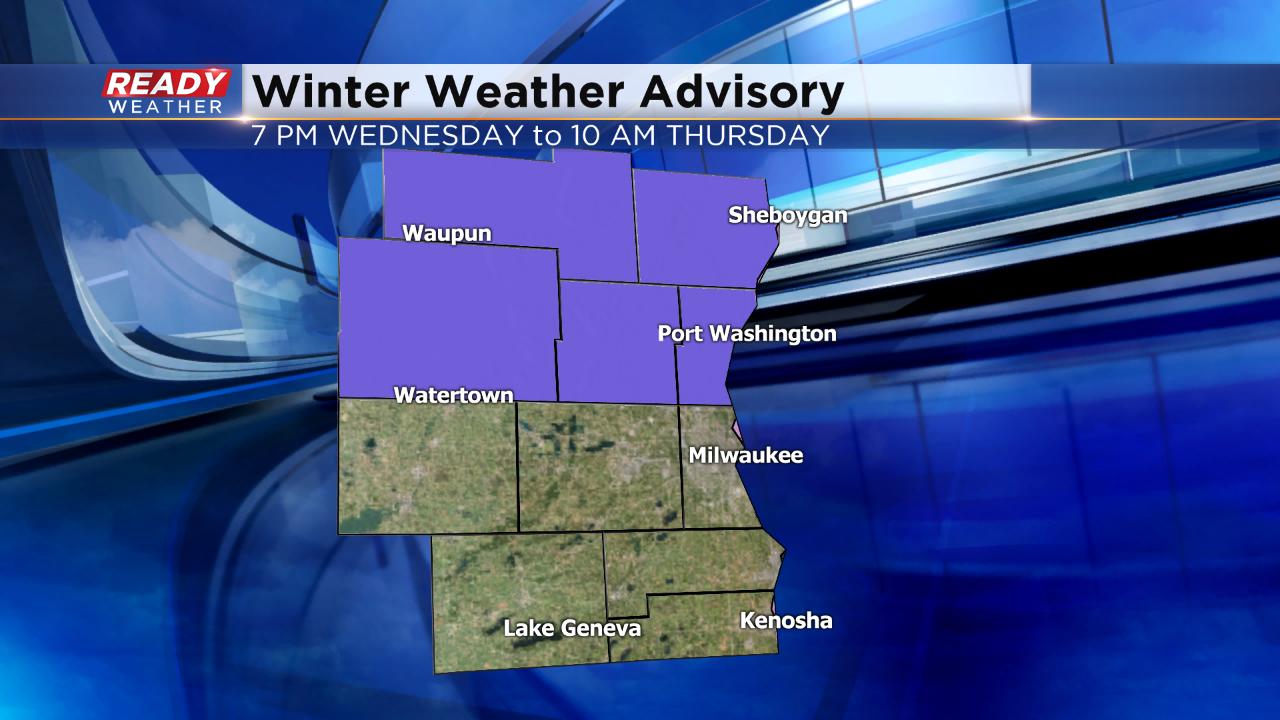 After Wednesday night's snow scattered rain showers are possible most of Thursday. 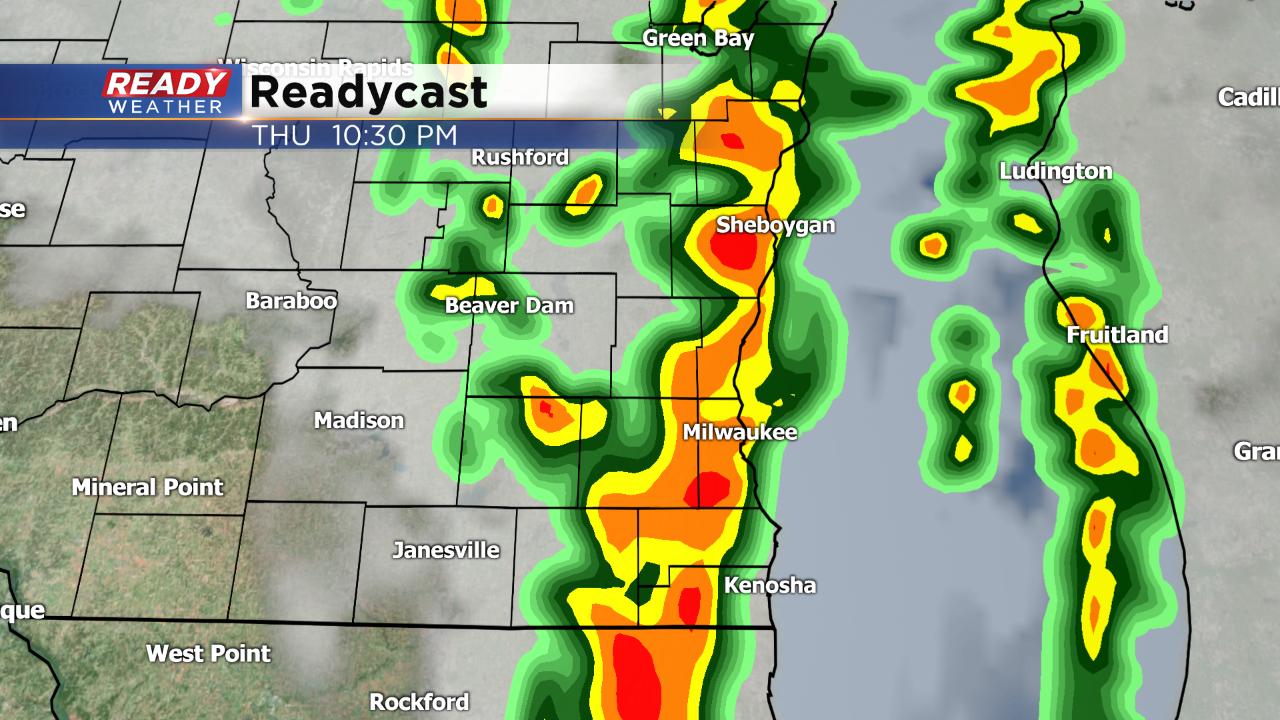 A few thunderstorms are possible too, especially Thursday night. Areas along and south of I-94 are in the "marginal" risk for severe weather so an isolated strong to severe storm is possible. Hail and wind would be the biggest threats. 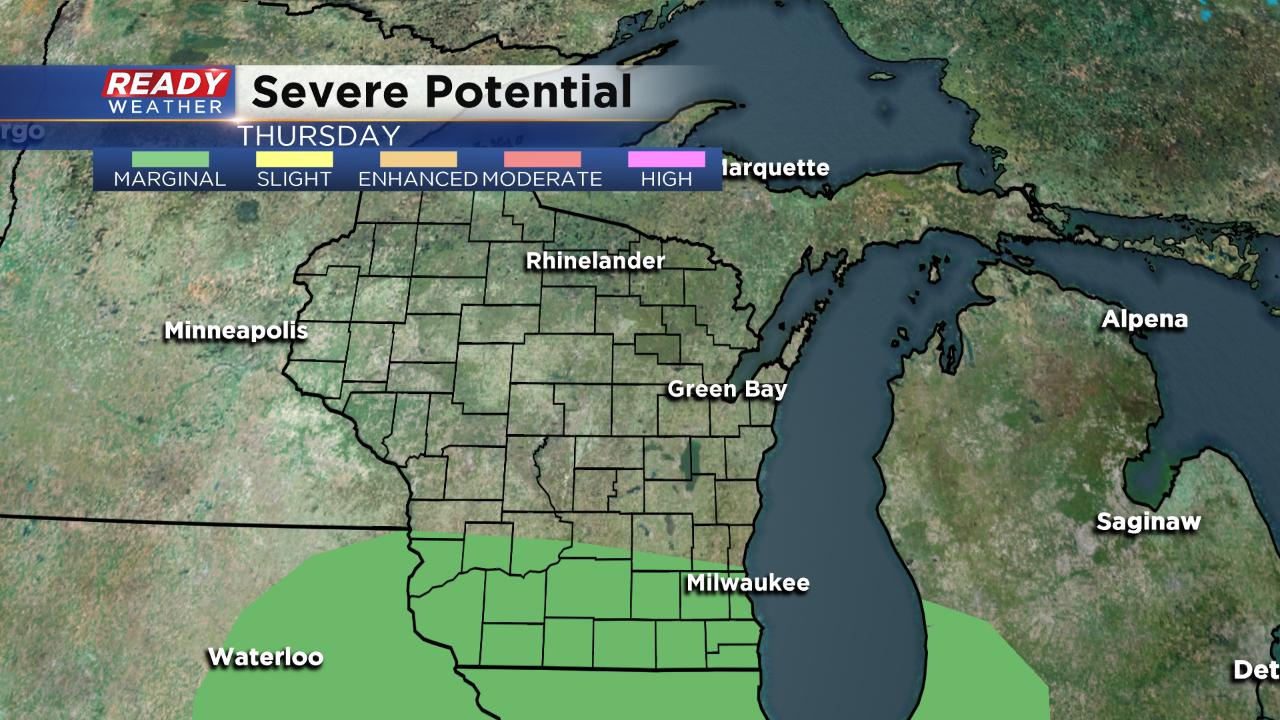 Even though the snow is stealing the headlines, heavy rain is likely with some seeing an inch or two by the time everything is done Thursday night. 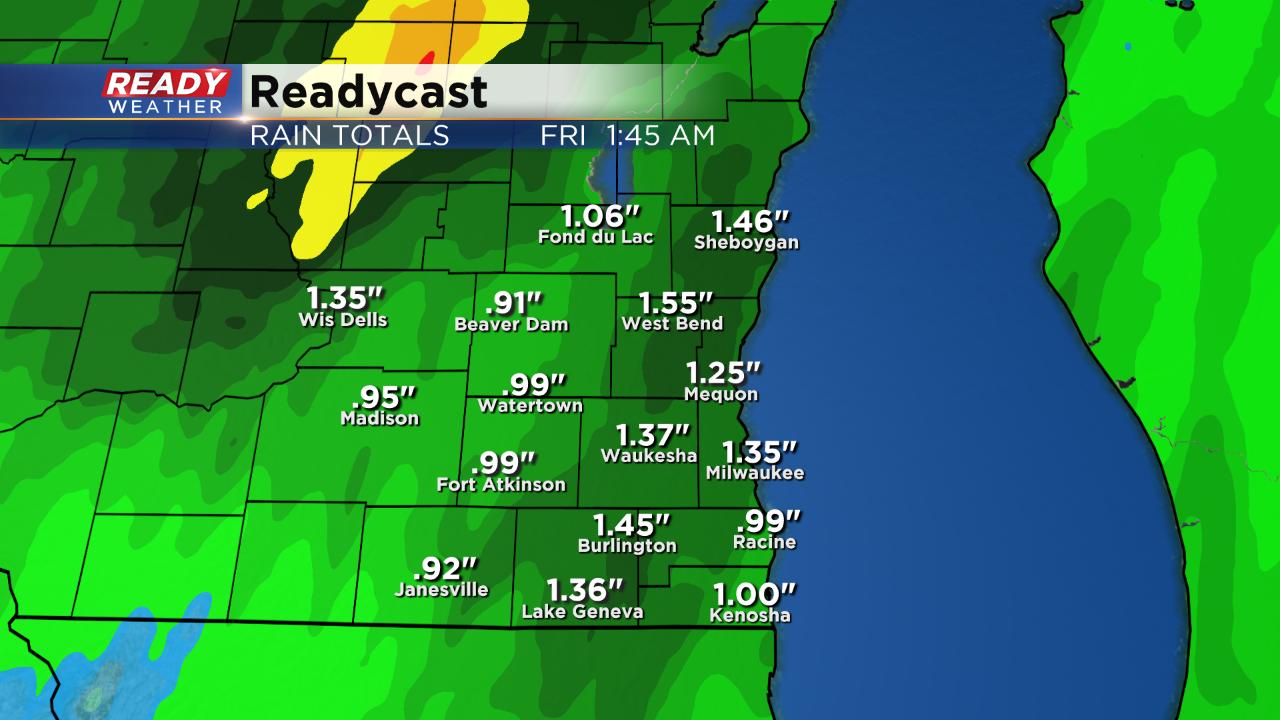 The thinking really hasn't changed much.  Look for a wintry mix by 3 or 4 pm, changing over to mostly snow into the evening.  Then expect a changeover back to wintry mix late Wednesday night into Thursday morning early.  The Winter Weather Advisory kicks in at 10 pm north of I-94 and last for 12 hours.  Watch out for icy spots, especially on bridges and overpasses. 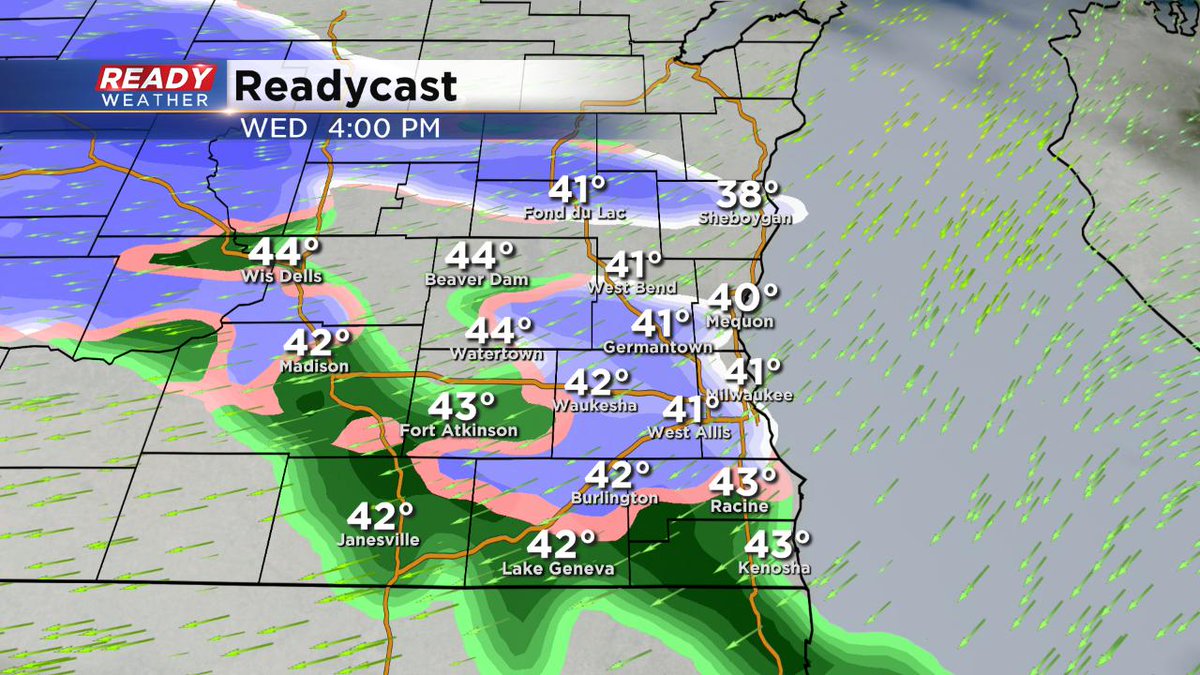 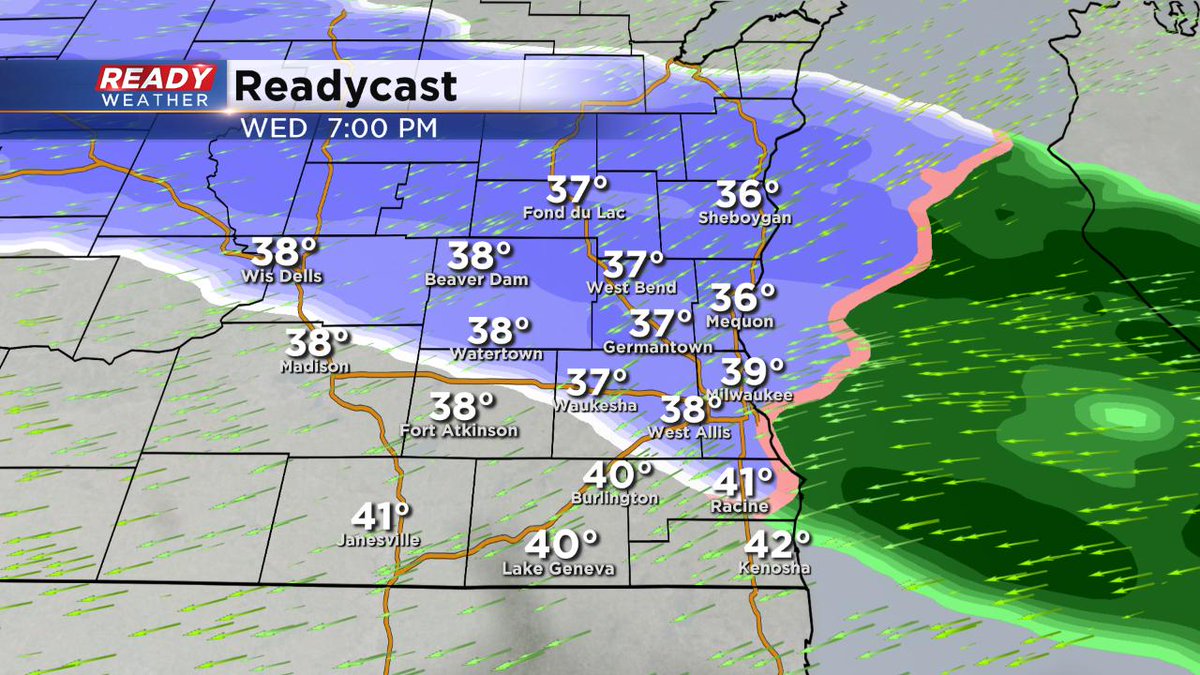 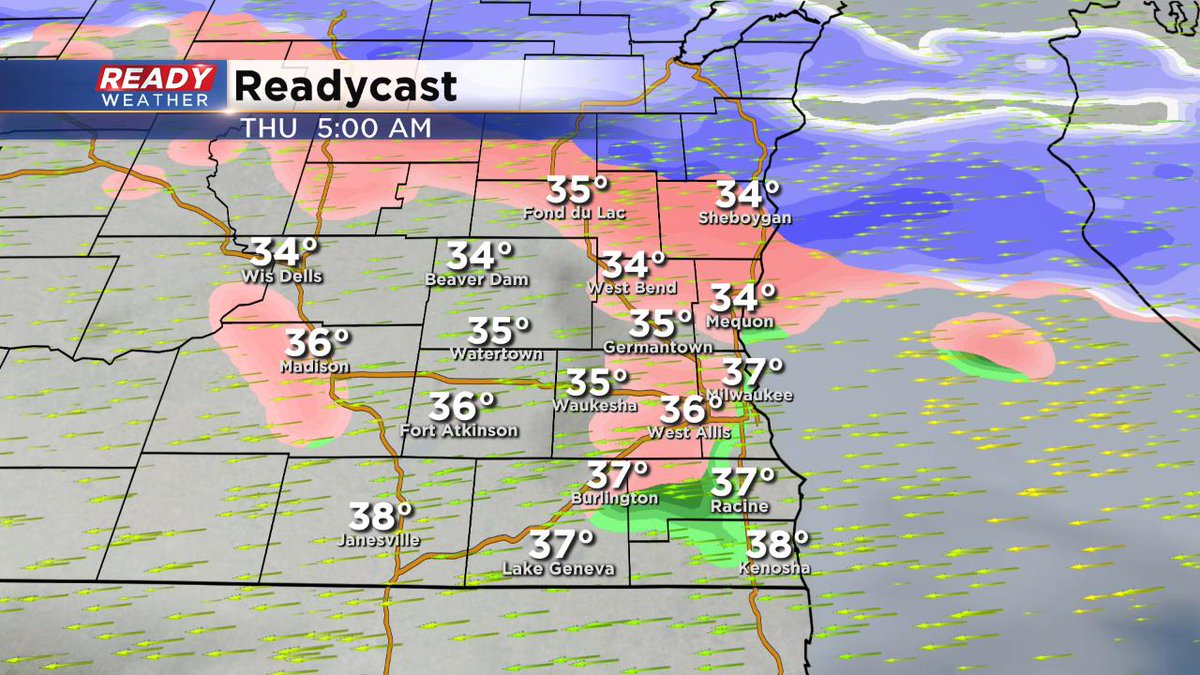 Thursday is probably the most interesting weather day of the week.  We go from snow showers to storms into Thursday evening . Could be a few rounds even, featuring heavy rain, hail, and wind.  We'll have gusty winds from the east on Thursday as well, up to 50 mph in fact. 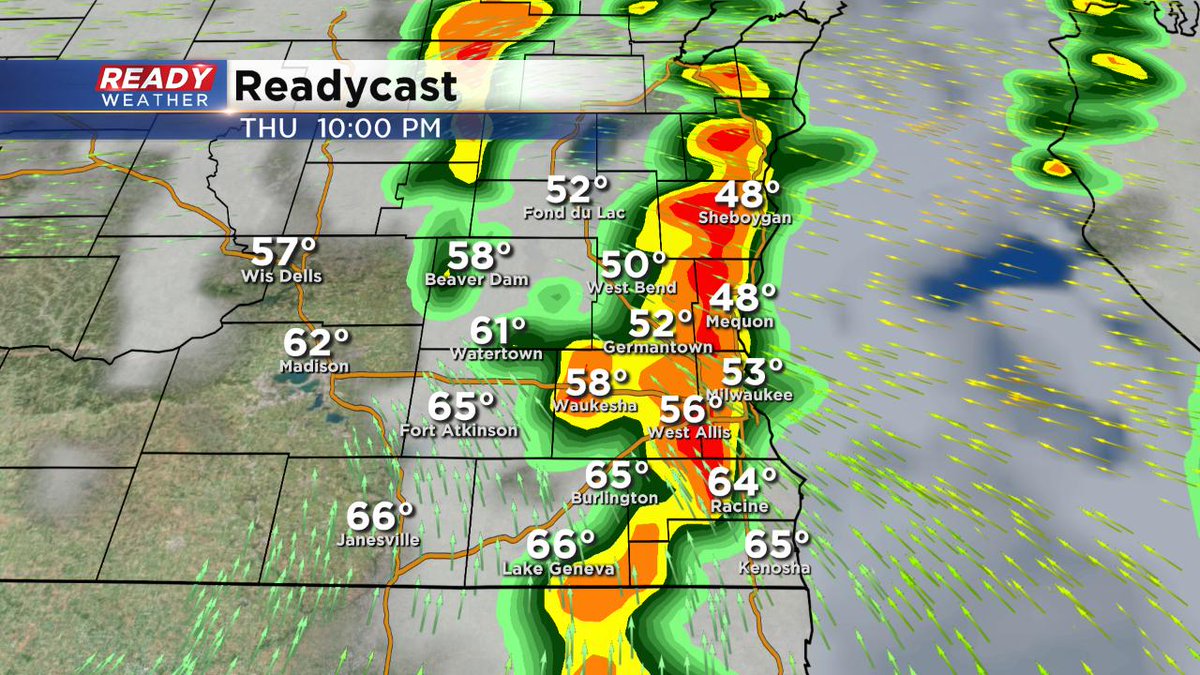 The weather quiets down by Friday.  Then more rain, and perhaps wet snow, enters the forecast again on Sunday.

A Winter Weather Advisory was issued overnight.  It runs from 10 pm Wednesday until 10 am Thursday and includes all areas north of I-94.  Look for wintry mix to develop this afternoon, switching over to snow by the evening.  Several inches of snow, at least, are possible.  We could see ice as well, accumulating to about a tenth of an inch.  The road situation should be fine except the farther north you go. 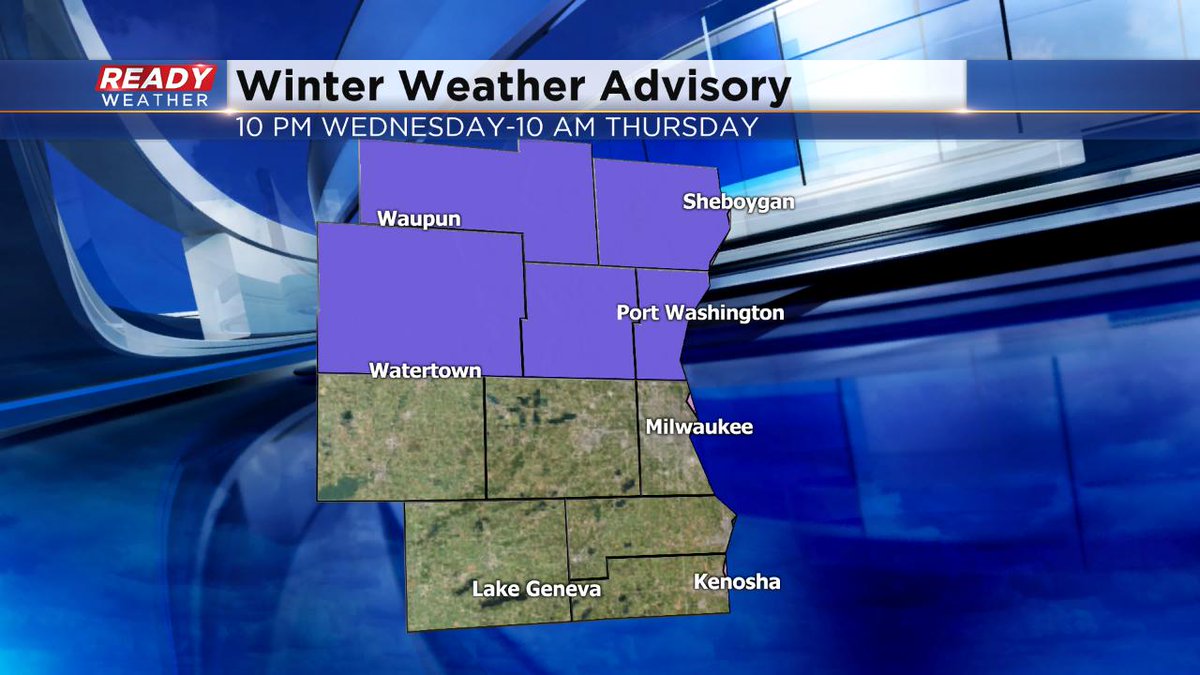 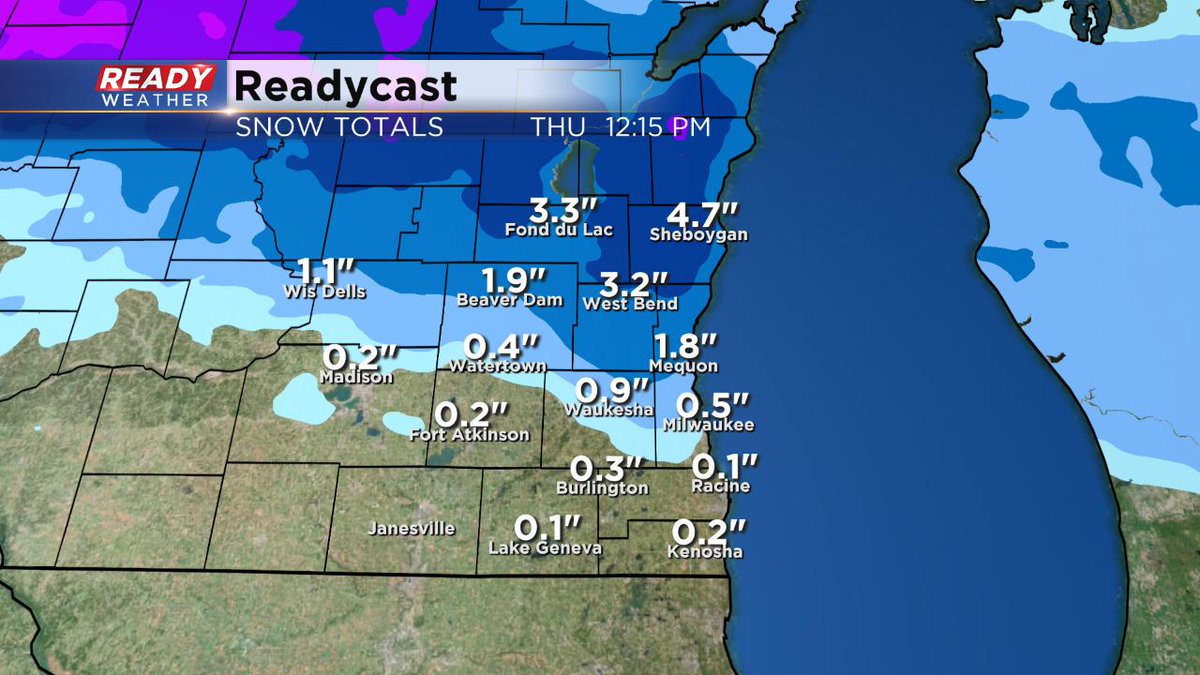 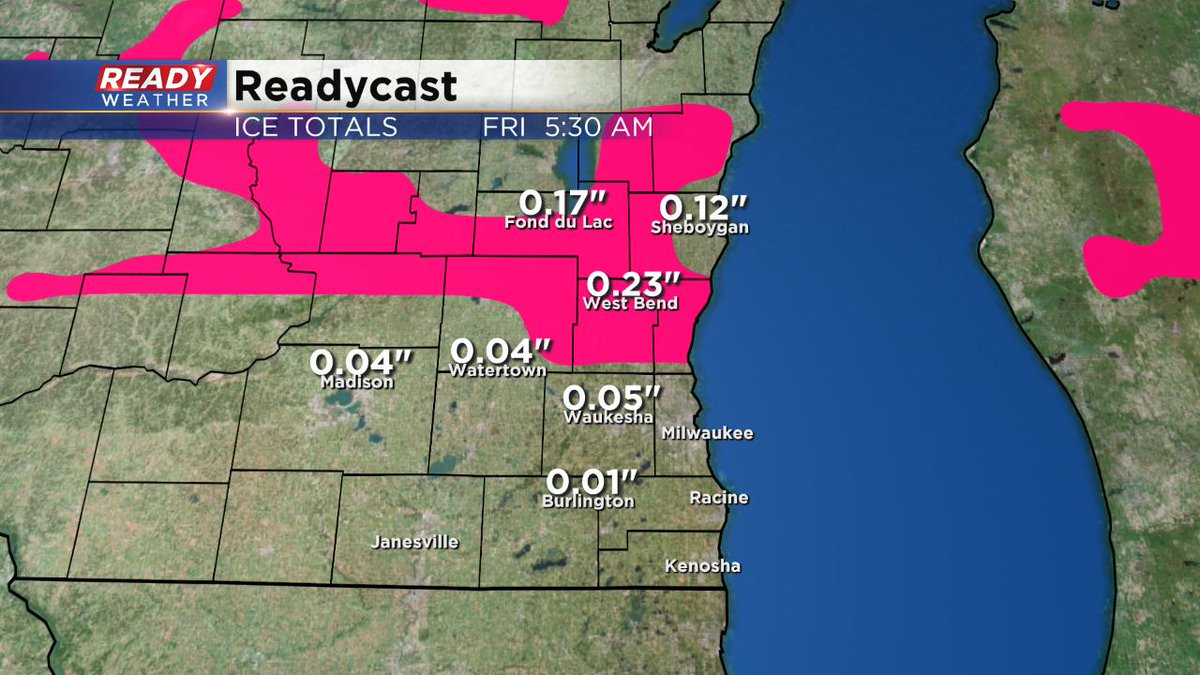 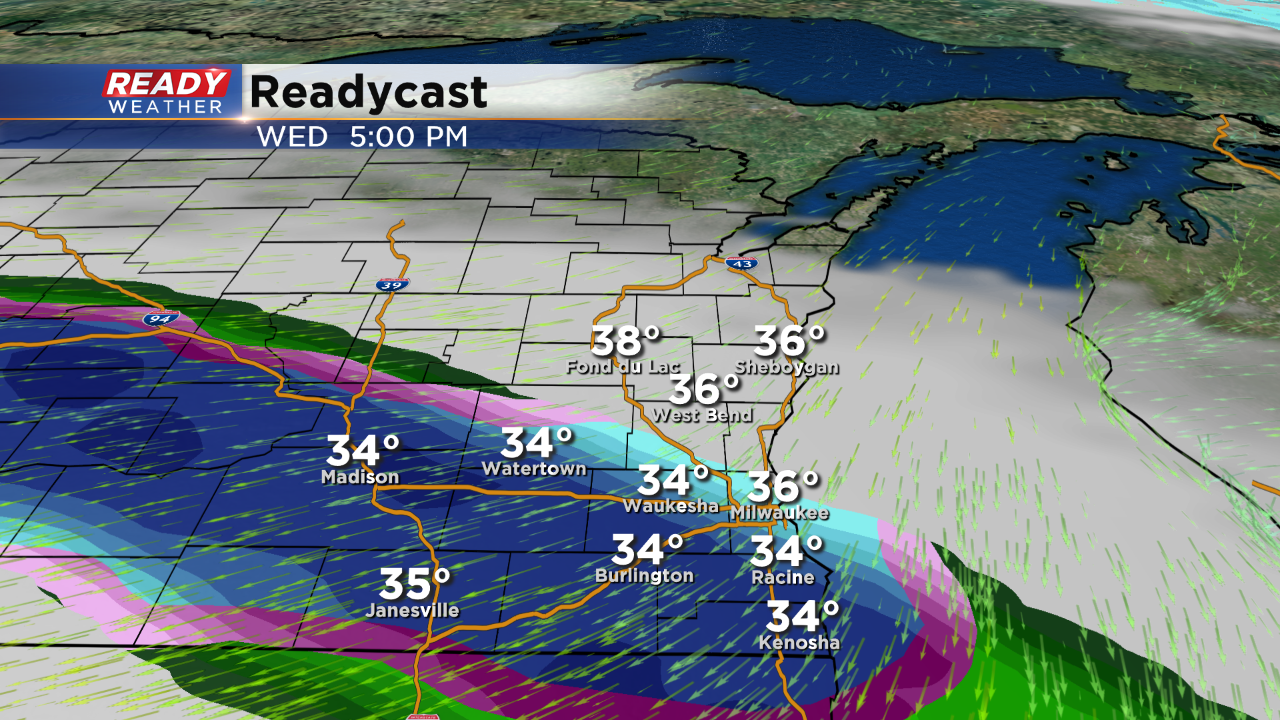 The morning and early afternoon should be quiet on Wednesday.  The evening commute will likely feature snow showers across southeastern Wisconsin.

The snow could be very heavy picking up quickly on grassy surfaces during the commute.  The road temps will likely be warm enough to keep a lot of the snow from accumulating on the pavement. 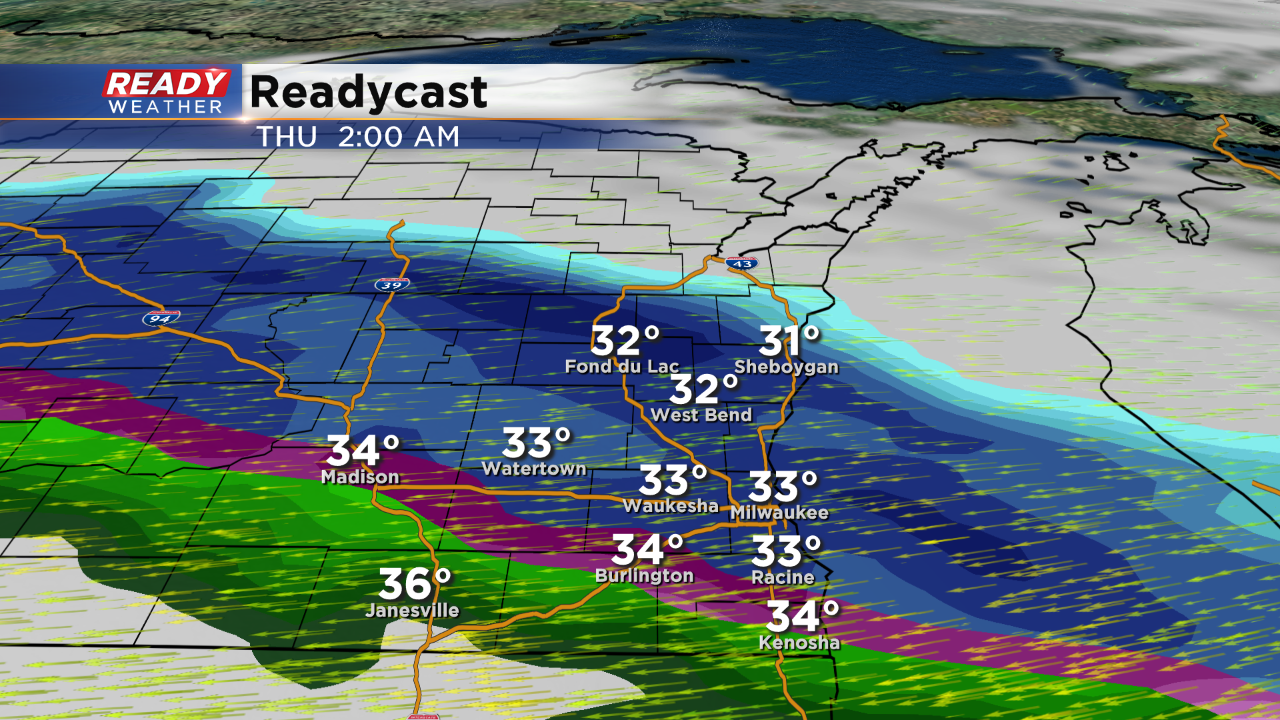 That snow will continue Wednesday night into early Thursday morning.  A mix to sleet or even some light freezing rain could occur early Thursday. 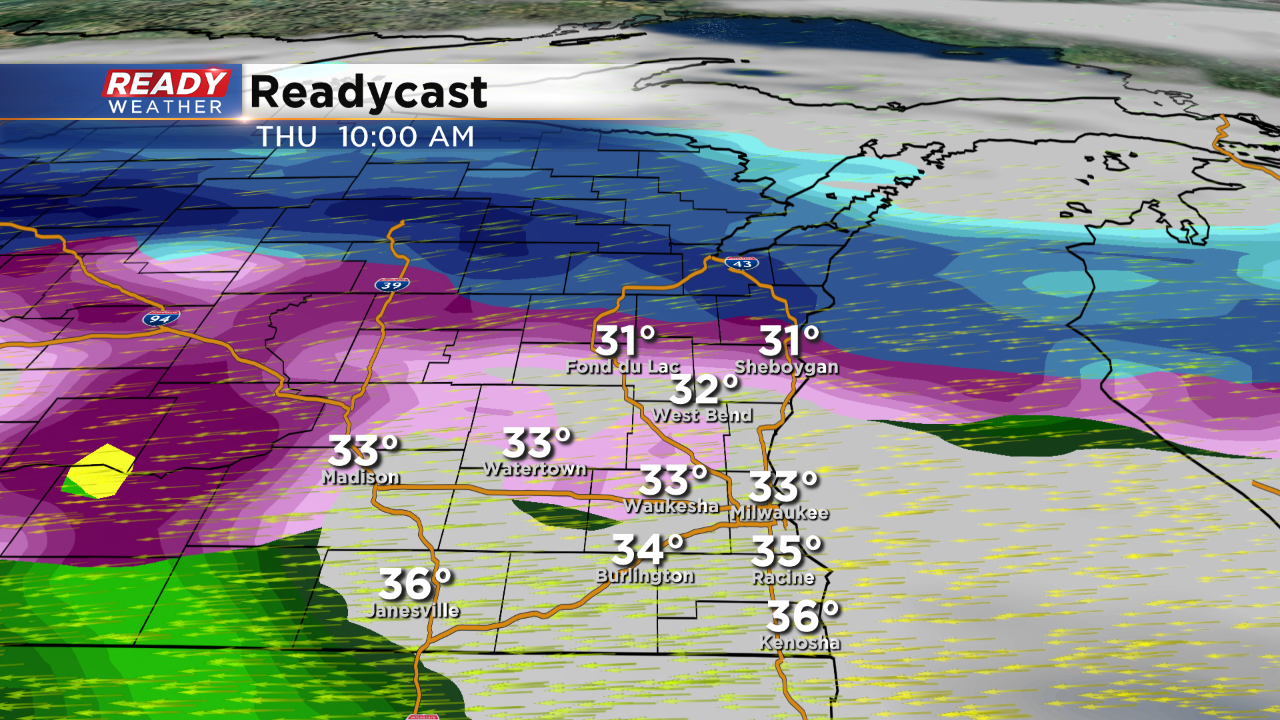 Warmer air arrives for Thursday melting the snow and bringing a chance for rain showers and a rumble of thunder, especially Thursday evening. 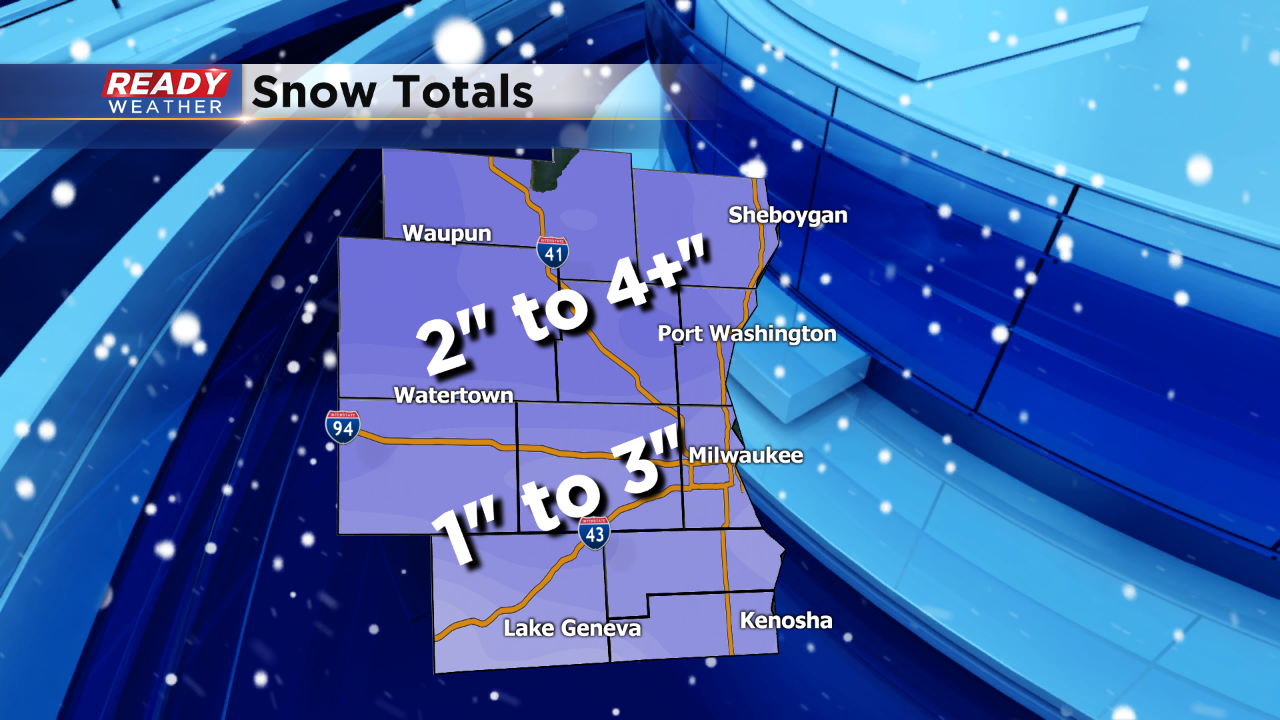 Generally most of the area will pick up between 1" to 3" of snow.  Slightly higher totals are possible just north of Milwaukee.  We don't expect the snow to stick around very long.