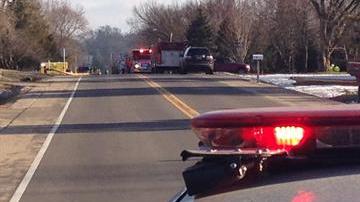 HALES CORNERS - Firefighters had a tough battle Thursday at a home on Kurtz Road. They were called to the tri-level structure at about 4:30 PM and were met by heavy smoke and fire. The older couple living there were able to get out unhurt, but the amount of materials inside made it a very difficult fire fight. Hales Corners Deputy Fire Chief Martin Freibergs says the contents inside bordered on hoarding. He said there were only narrow pathways inside for firefighters wearing bulky clothing and carrying heavy equipment to navigate through. The Deputy Chief also said when there is so much material in a structure it's even more dangerous for firefighters because it only adds to the fire. The heat builds up even more quickly and that puts the integrity of the building in doubt. The home is a loss and the American Red Cross is taking care of the occupants tonight. Officials say it could be awhile before they figure out a cause of the fire. Fortunately no one were injured either.