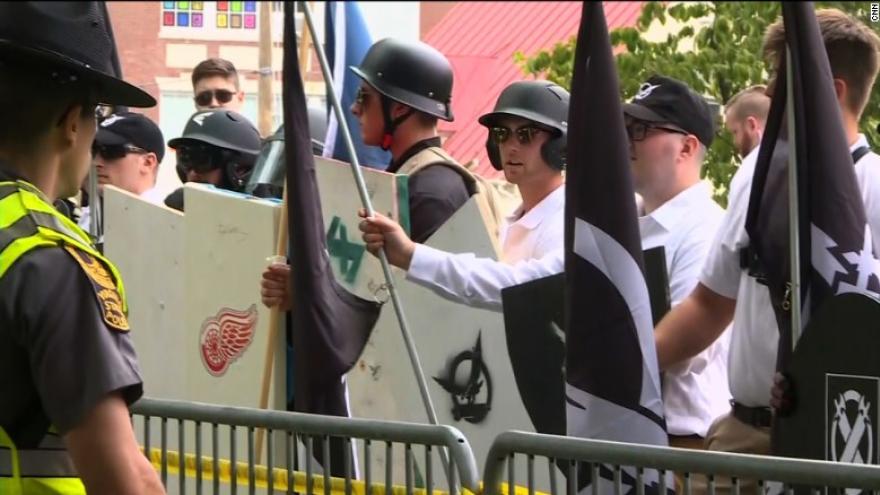 A vehicle has struck protesters in Charlottesville, Virginia, after police dispersed a gathering of white nationalists on Saturday.

A dozen medics are carting the injured back and forth on stretchers. The victims appear to be counter-protesters but could be residents, CBS News justice reporter Paula Reid reports.

The injuries range from minor to life-threatening, Reid reports.

White nationalists clashed with counter-protesters hours before the collision in downtown Charlottesville. Alt-right activists and white supremacists planned to protest the city's decision to remove a statue of Confederate General Robert E. Lee from the city's Emancipation Park.

Virginia Gov. Terry McAuliffe declared a state of emergency in the city to aid in the local response. He blamed "mostly out-of-state protesters" for the violence and clashes.

White nationalists clashed with counter-protesters before police moved in and intervened at a demonstration in downtown Charlottesville, Virginia, protesting the city's decision to remove a statue of Confederate General Robert E. Lee from the city's Emancipation Park.

Virginia Gov. Terry McAuliffe declared a state of emergency in the city to aid in the local response. He blamed "mostly out-of-state protesters" for the violence and clashes.

"I am disgusted by the hatred, bigotry and violence these protesters have brought to our state over the past 24 hours," McAuliffe said in a statement. He said state troopers and the Virginia National Guard were providing support to local authorities.

After a series of earlier confrontations in Emancipation Park, police declared the assembly unlawful and officers in riot gear began to clear the area shortly after noon. The crowd quickly dispersed and police cleared the area, which had earlier been the site of aggressive clashes.

Jason Kessler, the organizer behind the "Unite the Right" rally, told CBS News he plans to sue the city for violating a court order permitting the rally to be held in the park.

"Our First Amendment rights were violated today," Kessler said by phone. He said the city of Charlottesville and McAuliffe violated the court ruling because they "didn't like the outcome."

Some protesters who came for the "Unite the Right" rally were armed and dressed in military-like clothing, while others wore shirts with Nazi symbols and quotes from Adolf Hitler. Another read "diversity is just a genocidal scam."

The protest turned violent well ahead of the rally's official noon start time. At least two people were treated for serious but non-life-threatening emergencies from altercations by 10:30 a.m. Counter-protesters flooded the area to square off with the group of alt-right activists and white supremacists. Police deployed tear gas against the crowd shortly before 11:30 a.m.

Members of Congress largely condemned the rally, with House Speaker Paul Ryan denouncing the "spectacle" as "repugnant," calling on Americans to unite against hate.

The rally comes shortly after a large group of torch-bearing white nationalists marched through the University of Virginia (UVA) campus Friday night, after a judge issued a ruling allowing Saturday's protest to move forward.

"The University is monitoring the developments in Charlottesville and continues to coordinate with state and local law enforcement," the school said in a statement.

Since Thursday, organizers of the rally has been involved in a legal battle regarding the place of this protest.

Citing crowd safety concerns, the city of Charlottesville approved a protest permit earlier this week for the event to specifically be held in a different larger park instead of the smaller Emancipation Park where the Lee statue stands.

Late Friday night, a U.S. district court judge in Charlottesville agreed. In the ruling, Judge Glen E. Conrad said the city's "11th-hour decision" to revoke the permit was "based on the content of [Kessler's] speech rather than other neutral factors."

Kessler was represented by the American Civil Liberties Union of Virginia and the Rutherford Institute.

Several alt-right members were invited to speak at the rally including white nationalist Richard Spencer. Many credit Spencer with popularizing the term "alt-right" as he garnered national media attention after being heard shouting "Hail Trump!" at a white nationalist convention in Washington, D.C., and later, being punched in the face on Inauguration Day while giving an interview.

"I am deeply saddened and disturbed by the hateful behavior displayed by torch-bearing protesters that marched on our Grounds this evening," she said. "The violence displayed on Grounds is intolerable and is entirely inconsistent with the University's values."

Violence broke out Friday night as a large crowd of white nationalists marched through the University of Virginia (UVA) campus carrying tiki torches and chanting "you will not replace us."

The group marched ahead of a demonstration planned for Saturday to protest the removal of a statue of Confederate General Robert E. Lee. A federal judge issued a ruling Friday night allowing the Saturday rally to go forward.

Friday's march began around 10 p.m. at an intramural field and the crowd proceeded to a statue of Thomas Jefferson on the UVA campus. Jefferson founded the university in 1819.

Police arrived on the scene and declared the assembly unlawful. Fights broke out between the two groups of demonstrators, with some marchers swinging their torches. University police said one protester was arrested and charged with assault and disorderly conduct. Police said several people reported injuries, including one police officer.

The university police said officers did not deploy pepper spray, and suggested the protesters themselves may have used the chemical.

Teresa Sullivan, the president of UVA, denounced the march in a statement Friday night.

"I am deeply saddened and disturbed by the hateful behavior displayed by torch-bearing protesters that marched on our Grounds this evening," she wrote. "The violence displayed on Grounds is intolerable and is entirely inconsistent with the University's values."

Charlottesville Mayor Mike Signer called the march "a cowardly parade of hatred, bigotry, racism, and intolerance march down the lawns of the architect of our Bill of Rights."

"Not only as the Mayor of Charlottesville, but as a UVA faculty member and alumnus, I am beyond disgusted by this unsanctioned and despicable display of visual intimidation on a college campus," Signer, a Democrat, said in a statement.

The white-nationalist protesters are in Charlottesville for the "Unite the Right" rally on Saturday, where officials expect between 2,000 to 6,000 people to attend the protest against the removal of the Lee statue from the city's Emancipation Park, according to the Daily Progress, a newspaper in Charlottesville. More than 1,000 first responders officers will be on hand for the event, the Daily Progress reported.

The rally is being organized by Jason Kessler, a right-wing blogger. Kessler sued the city after officials said the rally must be moved from its planned location in the park. A federal judge sided with Kessler Friday night, ordering the city to allow the demonstration to go forward. The city said in a statement it would abide by the judge's order.