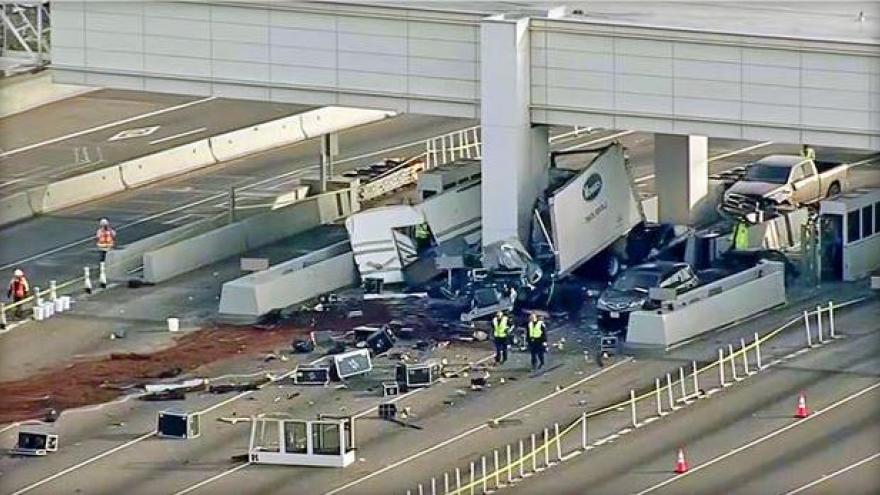 OAKLAND (CBS News) -- A toll collector on California's Bay Bridge was killed and the driver of a box truck was arrested after his truck slammed into a line of vehicles and crashed into the toll plaza, CBS San Francisco reports.

Shortly after 5 a.m., a line of vehicles was waiting at the toll booth and the box truck hit the last vehicle in line, causing a chain reaction, Williams said.

The truck continued westbound and hit the toll booth, demolishing it. The attendant inside the booth was killed, and the truck driver and a passenger were ejected from the vehicle.

"Anne and I are deeply saddened to learn of the loss of Caltrans Toll Collector Si Si Han, who died today while serving the traveling public. On behalf of all Californians, we extend our condolences to her family, coworkers and friends," Brown said.

Brown said Han had been a Caltrans employee for more than a decade and is survived by her husband, Ryan, and their 10-year-old daughter, Ashly. The governor said flags at the Capitol will be flown at half-staff in Han's honor.

The driver of the truck suffered major injuries. His passenger, along with five other motorists from vehicles that were involved in the collision, were taken to Highland Hospital for injuries ranging from minor to moderate, according to the CHP.

The box truck driver was identified as 32-year-old Daniel Berk. He has been arrested on suspicion of driving under the influence and manslaughter, according to the CHP.

The northbound Interstate 880 to westbound I-80 connector was closed, as well as two westbound lanes of Interstate 80, according to Officer Vu Williams of the California Highway Patrol (CHP). Williams said the lanes would remained close for much of the day.