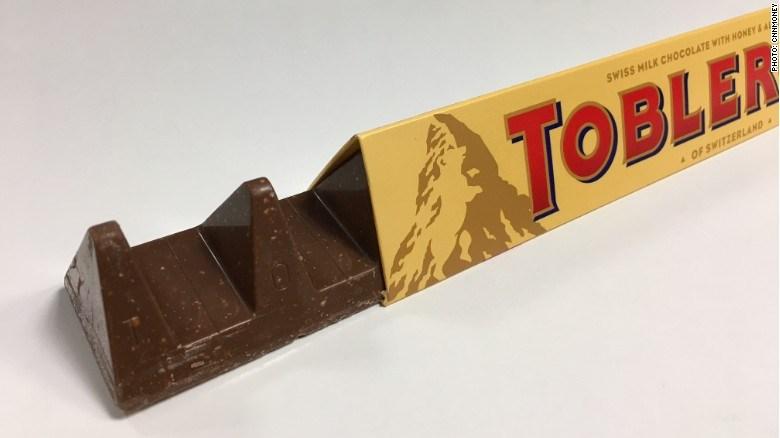 (CNN) It seems that Brits do mind the gap -- especially if it suddenly appears in their favorite chocolate bar.

Loyal fans of Toblerone reacted with horror on Tuesday after discovering that the distance between the triangular chucks in their favorite chocolate bar had expanded overnight.

Mondelez International (MDLZ), which produces the airport shopping staple, blamed rising ingredient prices for the change. By adding space between the triangles, the company was able to keep the bar's original packaging and length, but reduce the amount of chocolate.

The result is that bars that formerly weighed 170 gram have been slashed to 150 grams. Forty grams have been carved out of bars that used to contain 400 grams. The price remains the same, but customers are getting roughly 10% less chocolate.

"Like many other companies, unfortunately we are experiencing higher costs for many ingredients. We carry these costs for as long as possible, but to ensure Toblerone remains on shelf, is affordable and retains the iconic shape we all know and love, we have had to reduce the weight of this particular bar," Mondelez said in a statement on its Facebook page.

The change did not go down well with British chocoholics. The design shift was first announced in October, but a delay in getting the new version of the bar to the shelves meant many fans of the chocolate have only found out about it on Tuesday.

The reaction was particularly fierce on social media.

"I am one of your biggest fans and love your chocolate, but I bought a 150g toblerone earlier only to be left upset disappointed and a little distressed!," Dan Rickwood wrote on Toblerone's Facebook page.

"It looks dreadful ... you should have reduced the length and kept the chunky triangles," Cathy White added.

Some disappointed fans blamed Brexit for the change, tweeting pictures of giant Toblerone bars "from across the EU."

"I told you that leaving the EU would have serious consequences. Now I' m really upset," Mark Greenwood tweeted, attaching a "before and after" picture of the Toblerone bar.

While some of the Brexit comments were tongue-in-cheek, a sharp decline in the value of the pound following Britain's vote to leave the EU has affected prices. Commodities including cocoa are priced in dollars, and factory costs have gone up significantly.

"The new gappy-teeth Toblerone is yet another example of shrinkflation, where shrinking pack contents allows for a backdoor price rise," said Ratula Chakraborty, a senior lecturer in retailing at the University of East Anglia.