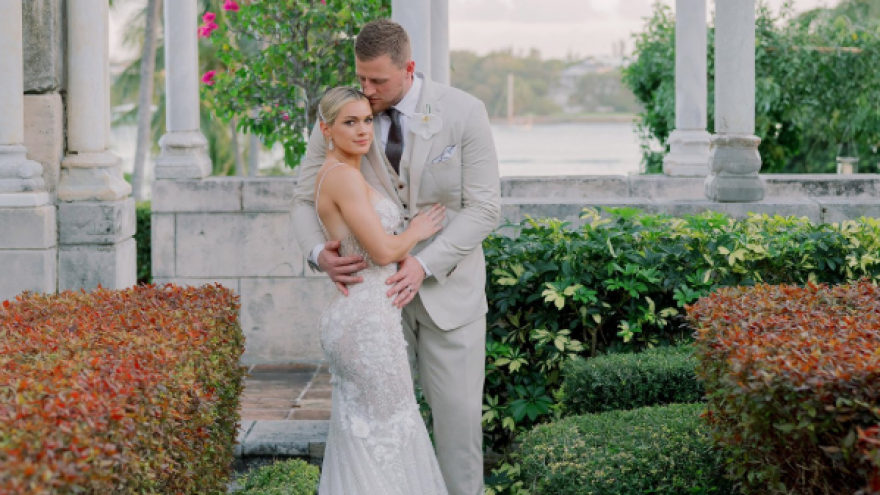 Crystal Dunn, who plays for the US Women's National Team and was Ohai's teammate at the University of North Carolina, posted photos and video as part of an Instagram story. In one, she and her husband pose with the bride.

Ohai's former Houston Dash teammate Amber Brooks posted a photo on her Instagram story of the bride pointing to the back of Watt's collar where "Mr. Kealia Watt" was embroidered. Brooks also shared pictures and video of the couple and their guests on the dance floor to her story.

An official for Watt's NFL team appeared to post a photo of the event before taking it down.

"The most beautiful wedding. The most beautiful love story. Great friends. A night to remember. @jjwatt @kealiaohai," wrote Amy Palic, vice president of communications for the Texans. The tweet included a photo of Watt in white and Ohai in a long white dress. Palic later took down the tweet.

Ohai and Watt announced their engagement in May 2019.

"I'm the luckiest man in the world. #SheSaidYes," Watt tweeted.

Watt has played for the Texans since 2011 and has been selected as Associated Press Defensive Player of the Year three times. He is a five-time All-Pro in his nine seasons.

Ohai was the No. 2 overall pick in the 2014 National Women's Soccer League College Draft, according to her profile on the Dash's website.

She recently was traded by the Dash to the Chicago Red Stars.