Tis The Season for Halloween Spending! 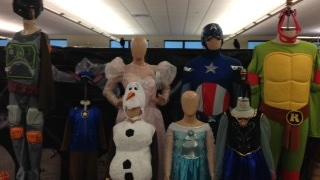 It's like Christmas in October. Sort of. It 's estimated consumer spending totals $7 billion during the Halloween season. This is second to what we spend during the holiday season.

Businesses are feeling the crunch as we get closer to the big event. In fact many communities are already taking part in trick-or-treat events this weekend. Even online businesses, like buycostumes.com out of New Berlin, are hoping to rake it quite a lot this next week. It typically brings in $70 million in Halloween sales.

I'm told some of the most popular costumes this year are characters from the \"Frozen\" movie in addition to superhero characters. Sean Hayes, vice president of Information Technology for BuyCostumes.com says when you're putting a costume together you have to remember safety as well. Since many kids are collecting candy around dusk, it's important to been seen. Glow sticks and reflectors are two good ways to accessorize.

While you're at it, remember some other Halloween safety tips. Go with a group of people, preferably with an adult chaperon. Also, be careful what you're eating. Make sure your candy is wrapped properly as well. If there's any doubt, just throw it out.