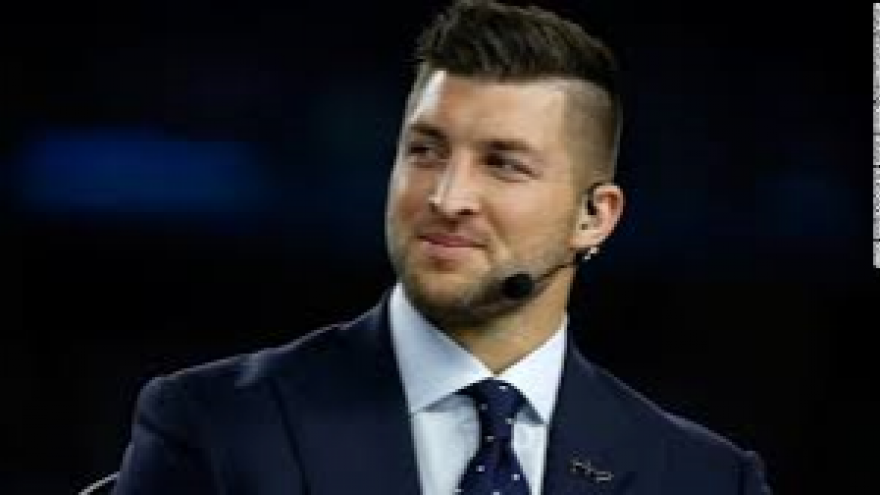 Tim Tebow hit a home run in his first official at-bat as a New York Mets minor leaguer, a charmed start Thursday night for a popular yet polarizing athlete who seems to have a knack for these remarkable moments.

Playing a sport where many thought he didn’t even belong in the batter’s box, the former NFL quarterback and Heisman Trophy winner launched a two-run drive for the Columbia Fireflies in a Class A South Atlantic League game against Augusta. It was his only hit in five plate appearances.

“All of my sports experiences helped me for moments like that,” Tebow said.

With a 15 mph wind blowing out, Tebow hit a shot just over the 372-foot sign in left-center field. He stopped at second base, thinking it was a double - but the ball hit a railing above the fence at the Bojangles Berm, and an umpire twirled his hand to indicate it was a homer.

Tebow spent an hour in the batting cage before batting practice Thursday with the hitting coach hitting fastballs to the opposite field. Then on the fourth pitch, he got one.

“It definitely felt good because that is something we worked on so much today,” Tebow said laughing.

Tebow clapped and pumped his fist in the air as he rounded the rest of the bases in the second inning as the crowd, already going wild, went into a frenzy. His teammates rushed the dugout railing, waiting for him. He laughed when he talked about one of his teammates saying it was the best thing he had ever experienced.

The 29-year-old Tebow played three seasons in the NFL, highlighted by a playoff touchdown pass in overtime that lifted the Denver Broncos over Pittsburgh. A two-time national champion at the University of Florida, he left football for broadcasting after the 2012 season.

Tebow later tried out with the New England Patriots and Philadelphia Eagles, but got cut in training camp. He then decided to pursue a career in a sport he last played as a junior in high school, signing a minor league deal with the Mets.

Last fall, in the Instructional League, he also homered his first time up. But in spring training for the Mets, Tebow batted .148 in 27 appearances. He struck out eight times and didn’t have an extra base hit or an RBI.

The lefty-hitting Tebow homered off Augusta lefty Domenic Mazza, a 22-year-old who had an 11-3 career record in the minors after playing at UC Santa Barbara. Mazza was the 666th pick in the 2015 draft.

In Tebow’s second at-bat, he couldn’t beat out a slow roller to the shortstop. He struck out the next three times up - two of them looking.

“There will be a lot of highs and lows in this game. That’s why you can’t make too much of anything,” Tebow said.

Tebow was batting seventh for the Fireflies and starting in left field in a league that typically uses 21- or 22-year-olds early in their pro careers.

Tebow sort of fits that mold. He hasn’t played organized baseball since his junior year of high school. He concentrated on football, winning the Heisman as a sophomore for Florida in 2007.

He then went to the NFL. In 2011, Tebow lifted the Broncos over the Steelers with an 80-yard TD pass on the first play of overtime. Tebow was traded to the New York Jets the next season, throwing only eight passes.

But maybe it’s Columbia that suits Tebow well. With the Gators, he accounted for seven touchdowns, threw for 304 yards and ran for 120 more as Florida beat South Carolina about 3 miles away at Williams-Brice Stadium 51-31 in the 2007 game that cemented his Heisman Trophy campaign.

Columbia is embracing the man it once rooted against. Noelle Colligan stood in a line at least a dozen people deep to buy a new No. 15 Tebow Fireflies jersey. She became a Tebow fan watching his march to the 2007 Heisman Trophy. The University of South Carolina student put on the jersey before the game started.

Then, as Tebow came to the plate, she leaned over and told a friend with the wind blowing out and Tebow’s amazing career so far, she just knew he would hit one out.

“It’s just not who he is as an athlete. It’s his whole character. It’s what he believes. It’s the good work he does,” said Colligan, who volunteered in February with a local special needs prom put on by the Tim Tebow Foundation.

In the Fireflies merchandise shop called The Mason Jar, employees were restocking the racks with the Tebow jerseys well into the night.