Tie vote for Virginia House will be settled in random drawing 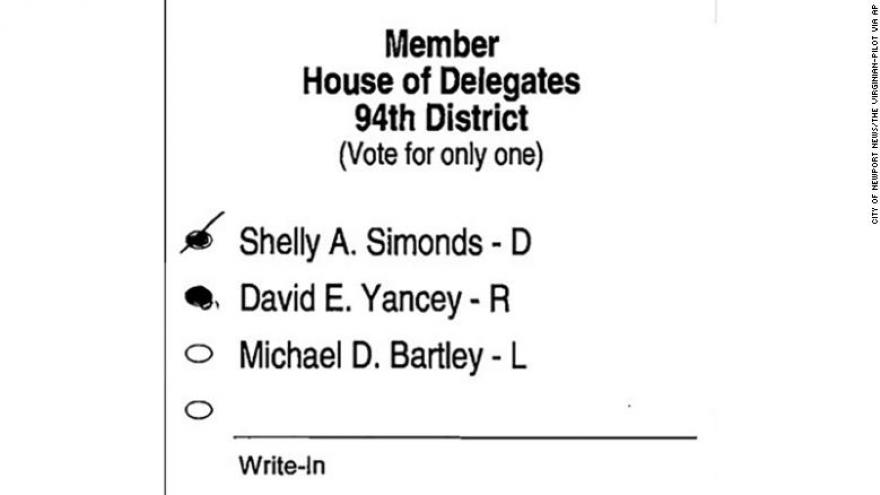 (CNN) A single ballot has put the control of the Virginia House chamber back in limbo for the second time in one week, and next Wednesday morning, the balance of power will be settled in a random drawing.

In the latest twist in the state's 94th House District race, a three-judge panel in charge of certifying a recount ruled that a ballot had initially been marked for Democrat Shelly Simonds, but the voter then crossed it out and marked it for Republican Del. David Yancey.

Simonds appeared to have defeated her Republican opponent by one vote on Tuesday — a remarkably razor thin margin that would have prevented Republicans from controlling the House, giving Democrats an equal amount of seats.

A copy of the ballot was obtained by The Virginian-Pilot, showing that a fine slash mark was written through the bubble marking Simonds.

Virginia Democrats are meeting later Thursday with their attorneys to discuss what legal options they have available to challenge the court's ruling that Virginia House of Delegates race 94 should be a tie, according to a Democratic official with direct knowledge of Simonds' campaign plans.

CNN has reached out to both campaigns for comment.

In the initial count, Yancey won by 10 votes, but the Simonds campaign filed a request for a recount.

A loss by 10 votes qualified for the recount and on Tuesday, Simonds emerged as the winner by a single vote — a determination that was yet to be certified by the three-judge panel.

The panel's decision has left the race tied at 11,608 votes for each candidate.

According to state law, the winner will be determined by sheer luck — a drawing out of film canisters — that will take place Wednesday at 10 a.m., ET.

Virginia law says that in the event of a tie, the election board will determine the winner "by lot," after which point Republicans believe the loser can petition for another recount; however, there is some disagreement among Virginia election experts as to how the law should be applied in this case.

"While it appeared yesterday that Shelly Simonds was elected, it's obvious now that the result will remain unclear for a while longer," Virginia House Republican leadership said in a statement Wednesday.

Marc Elias, the attorney for the Virginia House Democrats, on Wednesday afternoon issued a statement criticizing the panel's decision.

"Today's decision by the court was wrong, and Delegate-elect Shelly Simonds should have been certified the winner," Elias' statement read. "We are currently assessing all legal options before us as we fight for a just result."

If Simonds were to win, Democrats will be sharing power with Republicans in the state's lower chamber (50-50). This would be the latest defeat for Republicans on the East Coast after they lost key races in Virginia and New Jersey last month.

Democrats also made gains in the Virginia legislature, unseating more than a dozen Republicans and putting the control of the House in play.