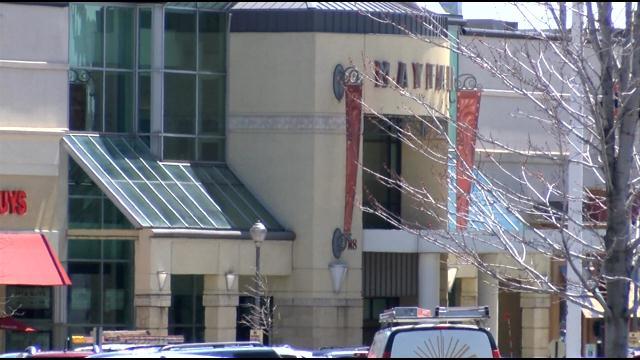 Police don't respond to Mayfair Mall for robberies very often -- in fact Wauwatosa police say they had zero robbery reports between New Year's and April 8th, 2015 -- but April 9th was a different story.

Wauwatosa police dealt with three separate robberies within about an hour span at the mall that day.

Around 11:30 a.m. April 9, Wauwatosa police responded to a bus stop outside Macy's at Mayfair. A woman was punched in the face and her purse was stolen. Police found her purse and most items not far away, but the suspect got away.

Then, just after noon, police went inside for reports of an armed robbery in a food court bathroom.

About 30 minutes later, another report of another robbery inside a first-floor bathroom kept police busy.

\"With them happening in such a short period of time and such a close proximity to each other, we did have a large police response,\" Zalewski said.

Police are looking for suspects in the first and last incidents, but already arrested the two men from the food court robbery.

Court records show 17-year-old Alonso Lowe-Smith agreed to buy some high-end belts from his victim via Facebook. The two met at the food court and went to do the deal in a bathroom.

That's when 18-year-old Andre Moore came in, pulled a gun and robbed the victim and Lowe-Smith. Moore fled, Lowe-Smith ran away, the victim wasn't injured, but the two teens met up across Mayfair Road in a Best Buy.

\"It would've happened whether it was Mayfair Mall or any other location they selected,\" Zalewski said of the bathroom robbery. \"It was clearly pre-planned.\"

Police arrested the teens outside the Best Buy after using Mayfair surveillance to help track them. Police found the gun was a b-b gun. Lowe-Smith told officers he was bored and wanted money.

\"That made me question whether or not I want to come out of my house to go anywhere,\" shopper Tamara Board said of the three robberies while standing at the same bus stop where one of the incidents happened.

Board says she keeps a close eye on her surroundings at Mayfair and worries about her safety there sometimes. But Board admits these latest robberies aren't enough to keep her away.

Lowe-Smith and Moore both face a felony armed robbery-party to a crime charge that could land each in prison for up to 40 years.

“The safety and well-being of our visitors and employees are always our top priorities, not just when incidents occur,\" Smith said in an email. \"We have a customized public safety program that entails different measures for various scenarios. Some of the measures are visible to our shoppers, like our trained security team and relationships with local law enforcement; other measures are not as visible.

We constantly review and evaluate our security procedures to ensure the safety and well-being of everyone who walks through our doors. We do not discuss our public safety measures because by doing so would compromise our efforts.

But I want to emphasize, safety and security are our priorities every day.”

Wauwatosa police are still looking for suspects from the other two April 9 robberies.

The bus stop-purse robbery suspect is described as a black male in his 30s, about 5'10\" with a heavy build. He was last seen wearing a dark gray hooded jacket.

The other bathroom robbery suspect from the first floor incident is described as a black male, 17-25 years old, about 6 feet tall and was last wearing a purple hooded sweatshirt, tan baseball hat and white tennis shoes.