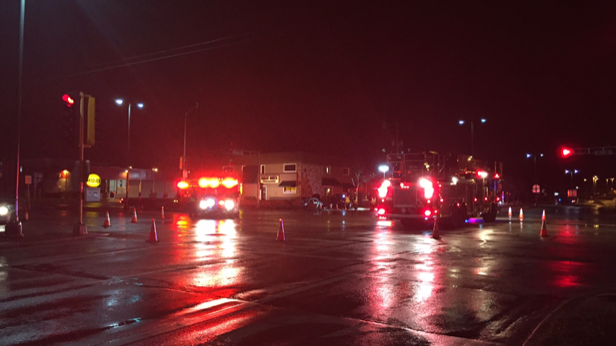 Three people were injured and one was  taken into custody following a high speed chase and crash early this morning at the intersection of 76th and Layton.   It began around 12:30 AM on Forest Home Avenue, south of Grange, when Hale Corners Police spotted a car traveling at a high rate of speed.  They pursued the vehicle, which at one point was traveling east in the westbound lane of Layton Avenue.  The chase ended when the suspect vehicle slammed into a car in the intersection of S 76th Street and W Layton Avenue.   The two vehicles then jumped the sidewalk and collided with retaining wall.   The suspect vehicle burst into flames and according to the Hales Corners Police, was destroyed by the fire.   The driver was able to get out of the car and attempted to flee police on foot but was quickly apprehended.  The suspect driver, a 20-year-old male was taken to a local hospital to be treated for his injuries.   A 40-year-old man and 28-year-old man in the  second vehicle were also taken to a hospital for treatment of their injuries.  The suspect driver was arrested and charges are  expected to be issued later this morning.   Both the Greenfield Police and Fire Department assisted the Hales Corners Police in this incident.