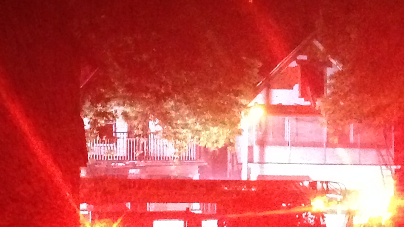 The Milwaukee Fire Department responded to a two alarm fire that affected three homes in the area of N10th and W Ring Streets late Tuesday.   According to MFD officials, the fire was reported in one home around 11:25 PM and then spread to the neighboring houses.  Firefighters were on scene for about 2 and a half hours battling the blaze.  The hot, humid weather hampered their efforts.  The residents of the homes were able to evacuate uninjured and are being assisted by the Red Cross.  One firefighter required medical attention at a local hospital for a laceration to his hand.  The fire appears to have begun in the upper floor of a 2-and-a-half story wood frame house.  The cause of the fire is under investigation by the Milwaukee Police Department.  The dollar amount of damage has not been determined.