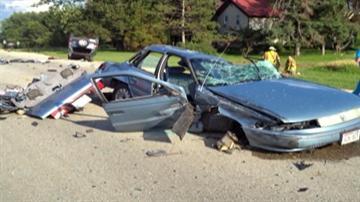 MILTON -- A three car crash that left two people hurt in the City of Milton is being blamed on a toy gun. Police say an 11-year-old boy was spotted pointing his toy gun out the window.

The Rock County Sheriff's Office says the boy was in the backseat of a car as his grandmother drove pointing his toy pistol at other cars. That caused one driver to slam on her breaks, causing a chain reaction ending with three cars seriously damaged.

Based on the description of the car, investigators were able to track down the 11-year-old boy. The sheriff's office is asking juvenile authorities to require the boy serve probation for disorderly conduct.