Thousands expected to protest against Sheriff Clarke on Monday 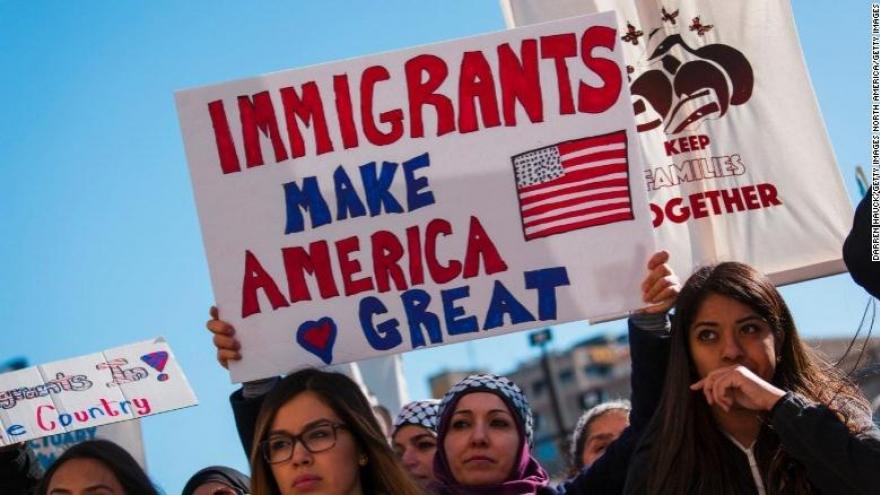 (CNN) Thousands are expected to take to the streets of Wisconsin on Monday to demand that the governor remove controversial Milwaukee County Sheriff David Clarke, a tough-talking firebrand who wants to use his deputies and correction officers to enforce federal immigration laws.

Among other concerns, organizers of the march in Milwaukee are critical of Clarke's desire to join the Department of Homeland Security's 287(g) program, which essentially deputizes local law enforcement agencies to operate as federal immigration agents.

The Department of Homeland Security wants to expand the government's ability to empower state and local law enforcement to perform the functions of immigration officers.

\"It basically legalizes racial profiling because you can be stopped and questioned and put in detention based on how you look,\" she said.

Neumann-Ortiz called Milwaukee the \"national epicenter\" of the fight against 287(g) because of the level of resistance to Clarke's plan to bring the program to the community, and because of his notoriety nationwide. A February march in opposition to Clarke's push to join the federal program drew thousands.

Clarke, a surrogate for President Donald Trump during the presidential campaign, is being considered for the position of assistant secretary of the DHS' Office of Partnership and Engagement, Politico reported.

Organizers of the Wisconsin \"Day without Latinxs, Immigrants and Refugees\" are also critical of Clarke's management of the Milwaukee County Jail, where local prosecutors say inmate Terrill Thomas, 38, didn't have access to water for a week and died of dehydration in his cell in April 2016. Three other people, including a newborn baby, have died in the Milwaukee County Jail since last April. The deaths are under investigation.

\"Part of what we believe needs to be exposed his disgusting record of human rights abuses,\" Neumann-Ortiz said.

Clarke's spokesman could not be reached on Sunday nor could a spokesperson for Gov. Scott Walker.

The Wisconsin march coincides with a nationwide Day without Immigrants that falls on May Day, which recognizes the contributions of workers. Activists are demanding economic and racial justice and rights for workers and immigrants. Marches are planned in other cities.

In Wisconsin, more than 140 mostly Latino-owned business are expected to close, including about 100 in Milwaukee alone, organizers said.

Jorge Huerta, 36, a Mexican-American owns Solos Automotive, one of the Milwaukee businesses that plans to close. He said he wants to support the Hispanic community, and he hopes to be an example to other immigrants.

\"I was illegal when I came here. I'm a business owner,\" said Huerta, who became a citizen through marriage in 2001. \"America is just a great country ....There is nothing that can hold us back as long as we do the right thing and speak the language and educate yourself.\"

Buses are scheduled to leave from 12 cities throughout the state and converge on Milwaukee. The march will end at the Milwaukee County Courthouse.

Organizers say \"tens of thousands\" are expected to strike and withdraw their children from schools.

Who is Sheriff David Clarke?

Clarke, who is African-American, is known for his unapologetic, blunt commentary, particularly on the subject of crime. He made news during the presidential campaign for his opposition to Black Lives Matter activists, whom he said would join forces with ISIS.

In a heated interview last summer with CNN's Don Lemon, Clarke said he had predicted the police shooting in Baton Rouge, Louisiana that killed three law enforcement officers and wounded three others.

\"I've been watching this for two years. I've predicted this,\" Clarke said. \"This anti-police rhetoric sweeping the country has turned out some hateful things inside of people that are now playing themselves out on the American police officer.\"

He called the Black Lives Matter Movement \"purveyors of hate,\" and blamed it for inspiring violent crimes against law enforcement.

When pressed, the sheriff didn't offer any specifics to support his claims.

Clarke was elected in November 2002 to his first four-year term and is currently serving his fourth term, according the Milwaukee Sheriff's Office.

In a letter to Thomas D. Homan, acting director of US Immigration and Customs Enforcement, Clarke expressed his desire to be part of the 287(g) program.

According to a recent DHS memo, eight new additions to the 287(g) program were approved to move forward last month, and up to 68 more agencies may follow based on interest.

The 287(g) program has seen its share of controversy.

In 2007, the American Civil Liberties Union of Arizona filed a class action lawsuit against then-Maricopa County, Arizona Sheriff Joe Arpaio over the immigration raids his department conducted under the 287(g) agreement. The suit alleged that Arpaio abused his power.

The Justice Department later found that Arpaio's deputies has \"engaged in a widespread pattern or practice of law enforcement and jail activities that discriminated against Latinos,\" according to a December 2011 letter of finding by the department.

Arpaio was later found to be in criminal contempt after he and three members of his office continued to detain people they believed to be in the country illegally after a federal judge ordered them to stop.

Arpaio, who founded Tent City, the infamous outdoor jail in Arizona where inmates wore pink underwear and shuffled around in chain gangs, was voted out of office in 2016. Last month, officials said the jail would close.