This 'Bee' Drone Is a Robotic Flower Pollinator 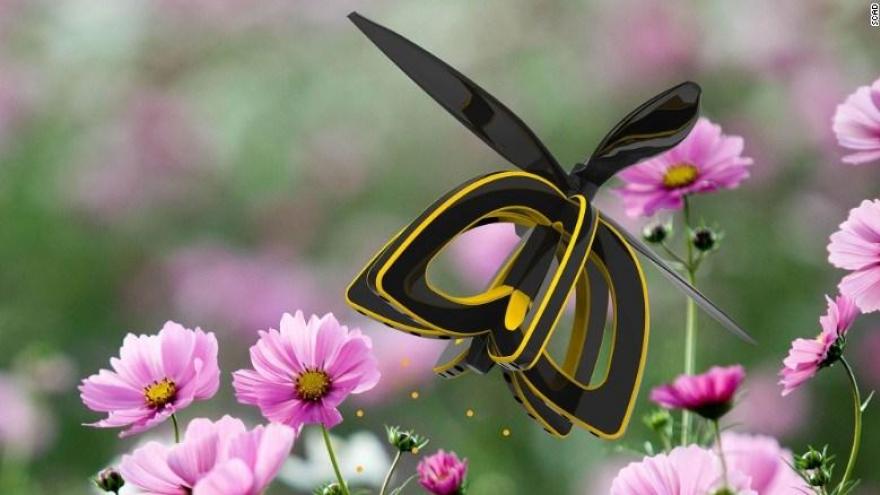 (CNN) In our food chain, honeybees are tasked with a vital function: pollination.

In North America alone, honeybees' role in pollination enables the production of at least 90 commercially grown crops, including apples, blueberries, melons and broccoli.

One student wanted more people to understand the significance of bees to human life -- so shecreated what's essentially a "bee drone" to be a functional teaching tool that couples technology and design.

Plan Bee is a personal robotic bee (controlled by a smart device) designed to mimic how bees pollinate flowers and crops. Similar to how bees transfer pollen from one flower to another, the drone sucks in pollen from a plant and expels it onto other flowers to enable cross-pollination.

Industrial design major Anna Haldewang first developed the idea for Plan Bee in a product design class, after a professor challenged her to create a self-sustainable object that stimulates the growth of plants.

"You need sun, water, soil and cross-pollination for that to happen," said Haldewang, 24, a senior at Savannah College of Art and Design in Georgia.

Pollination made her think about bees, and in researching, Haldewang was struck by honeybees' struggles: "I had no idea about the danger to honeybee colonies and that bees were disappearing," she said. It prompted her to create an educational product that both addressed her class assignment and would help to spread awareness about a bee's role in the food system.

So she developed the Plan Bee prototype, a hand-sized yellow-and-black device that looks nothing like a bee. She wanted to give it the essence of a bee without exactly replicating the insect, she said.

Haldewang worked through 50 design variations before settling on the final version. The device is made with a foam core (to keep it lightweight), plastic-shell body and a pair of propellers to keep it airborne. Each of the drone's six sections has tiny holes underneath through which the device sucks in pollen from a flower when it hovers over it. The pollen is stored in the body cavity before it's later expelled for cross-pollination.

"When you flip it upside down, it looks like a flower," she said, adding it was her way to honor a flower's role in pollination.

Plan Bee is in its early stages, and Haldewang is still fine-tuning the engineering. But she has already filed a patent application, and she hopes to have a marketable product in about two years.

Her plan for the device, at first, is for it to be an educational tool. "I would love to see people use it in their backyards and even create custom gardens with it," she said. "With an actual bee, its so small you don't notice it and how it's pollinating flowers. With the drone you can see how the process works."

Plan Bee is one of 1,600 new concepts that SCAD's design students develop every quarter as part of their coursework. Victor Ermoli, dean of the school of design, and SCAD founder and president Paula Wallace review each project for its potential in marketability or industry collaboration. Separately, the school also works on 30 projects a year leveraging technology, in collaboration with companies like Microsoft (MSFT, Tech30), HP (HPQ), AT&T (T, Tech30), Dell and Mattel (MAT).

Haldewang's bee drone stood out, Ermoli said. "It is outstanding. The design is self-explanatory and it offers a very clever solution."

But is it viable? Its application in backyards as a teaching tool has potential, said Ermoli. And the drone could serve an even bigger purpose. "It could conceivably be used in large-scale farming, even in hydroponic farming."