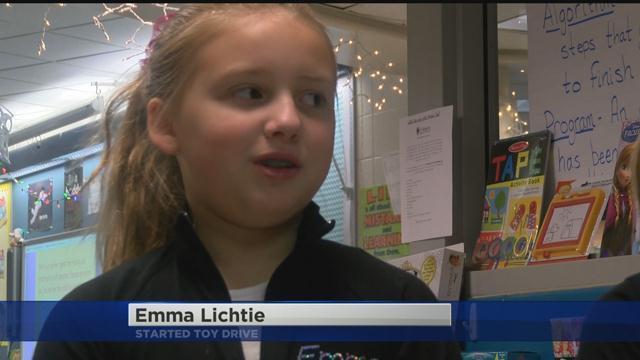 It is the season of giving. And sometimes there are those special people and reminders of how we can all give back. That's exactly true for one Waukesha third grader who's trying to bring a little joy to other children who may be spending this Christmas in the hospital.

This was an idea spearheaded by nine-year-old Emma Lichtie.

When she was in kindergarten she spent weeks at a time at Children's Hospital.

She ended up having infected tonsils which were removed.

But it was an experience that her mom thinks made her grow up faster than she should have.

"She's a unique little girl I credit everything she's had to go through herself to experience that firsthand," Melanie Lichtie, Emma’s mom said.

Emma's mom Melanie, who is also a teacher at Summit View Elementary in Waukesha, said Emma has always been special but may have been forced to grow up.

In kindergarten she was constantly sick, and spent weeks at a time at Children's Hospital.

"Finally a G.I. specialist Dr. Lee did a scope on her and found that the backside of her tonsils were completely infected," said Melanie.

Her tonsils were removed and Emma still remembers the good and the bad from that experience.

“I was in the hospital for a long time but they gave me toys and it made me happy,” said Emma.

It was that recent memory that Emma stopped to think how she could make others happy. Her mom said it was on her own accord.

"We were driving in the car and she said I want to donate some toys to Children's Hospital. I said that's great idea but as a mom I can't go to purchase all these toys,” said Melanie.

So Emma got to work and through flyers and a video commercial the toy drive for Children's Hospital was created.

And the toys have been flying in.

"I honestly expected only a table and when we got a few days into it we had 3,4,5 tables full of stuff it was like whoa,” said Matt Lautenbach, Emma’s teacher.

Emma said she is overjoyed at the response and says this is something she wants to do continually every year.