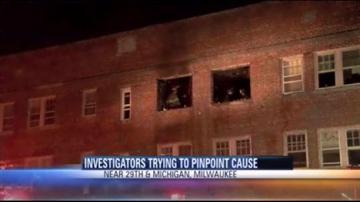 MILWAUKEE -- A residential fire is a frightening and stressful experience, but residents of one Milwaukee apartment complex say it's starting to become habit after firefighters showed up to battle a third fire at the building in at least four years Sunday night.

Firefighters were called to the complex near 29th and Michigan just before 10 p.m.

Some residents were asleep and others were watching a movie when they saw flames shooting out of an apartment window.

Neighbors tell CBS 58 News they are angry and fear for their safety after being forced out into the dark with only the clothes on their back yet again because of a fire.

\"This is the third time that that's happened in this building since I've been here, and I've been living here almost four years now,\" James Kurtz said. \"It's about time for me to move out of this place before I lose everything I own.\"

Residents say there was an argument between two residents before the fire started.

Based on that, some speculate this fire was no accident.

Fire investigators continue to work the case and the Red Cross is assisting residents.

Stay tuned to CBS 58 for the latest developments.