Thieves try to sell stolen sneakers they took from teenager's feet, turns out they're knock-offs 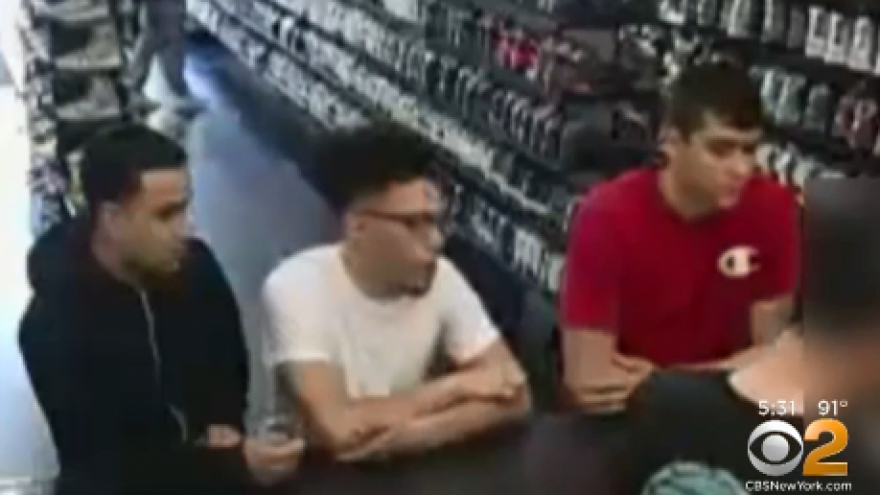 NEW YORK (CBSNewYork) — Police continued to search Thursday for the suspects who threw a 17-year-old onto the ground and stole his sneakers in Queens.

It happened around 12:30 p.m. Saturday on Quince Avenue between Bowne Street and Parson Boulevard in Flushing.

Surveillance video shows three suspects pull up in a white, four-door sedan while the victim stands on the street using his cellphone. They snatched the sneakers off his feet and stole his wallet, containing $10 and a debit card.

The victim was treated for cuts to his knees and arms.

But as CBS2’s Marc Liverman reported, the story doesn’t end there.

The suspects were caught on camera again – this time, trying to sell the shoes at Image Sneakers on Northern Boulevard.

“They weren’t nervous, they weren’t stuttering or anything like that,” said a store employee named David, who was behind the register. “I just thought they belonged to one of the kids. I didn’t know they were stolen at the time.”

David said this pair of shoes typically costs between $1,500 and $2,000, but he didn’t buy them because they were knock-offs.

“If the kids feel like that’s their way of getting a quick buck, then it obviously happens,” he said.

He said it’s something that happens way too often, but not at his store – not in the four years he’s worked there.