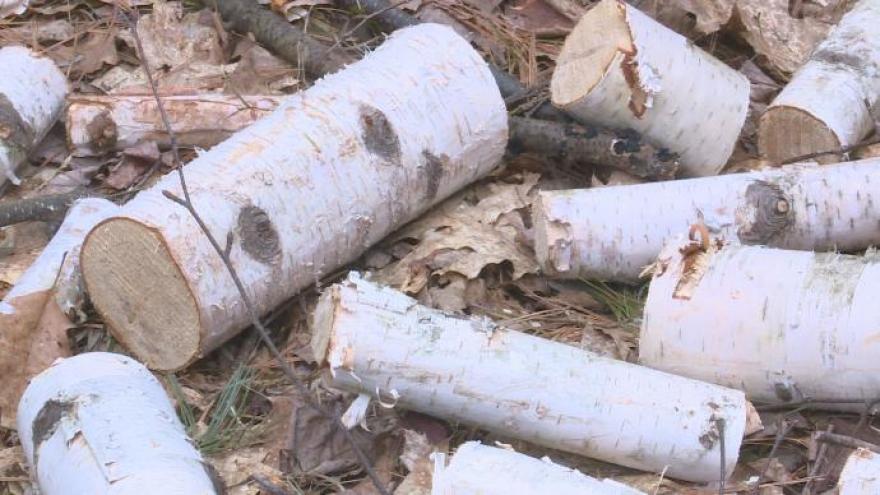 WOODRUFF, Wis. (WSAW) -- The great outdoors is in.

Candle holders, coffee tables, coat racks and even bed frames all made of white birch are fueling a bizarre case of tree thefts-- primarily in northern Wisconsin and Minnesota.

Parks, forests and even private lands have fallen victim.

Harvesting the white birch trees without a permit or on land that isn’t owned by the harvester, is illegal.

\"Over the last couple of years, in the Northwood’s and across all of northern Wisconsin, we've been seeing a few unscrupulous people out stealing the resources,” Walz said.

The worst thefts occurred in Washburn County, where according to Washburn County Forest Administrator Mike Peterson, 100 to 200 acres worth of trees have been stolen from county forests.

Thieves can earn hundreds of dollars selling white birch trees, all while damaging the environment.

\"A lot of wildlife use these, from birds to deer to browse in the winter time. If they go in and cut these down, sometimes it can take a decade or more for trees to regenerate as well,” Walz said.

In some cases he adds, the opportunistic thieves can also cause damage to the community.

\"They'll not only take the trees, but they'll also take anything else that isn't nailed down. We've seen some of them that have been involved in drugs with a prior history of drug use, burglaries, any of that type of stuff.\"

\"We've gotten the word out to sheriffs, police out there to keep their eyes open. Some of it is occurring on the county lands also. National forests, U.S. Forest Service rangers are well aware of it, and have caught people as well,” Walz said.

He’s also asking residents to keep an eye out themselves.

\"Often our best cases come from the public. We encourage if someone sees something or suspects something to say something as well.”

If poachers are caught cutting down white birch trees illegally, Walz said the punishment may vary depending on the amount of trees cut.

Punishments can range from substantial fines, to time in jail.