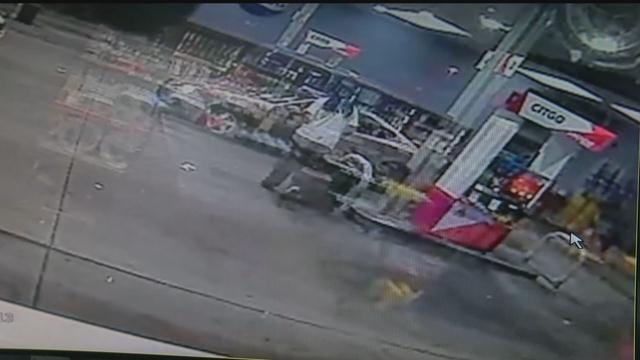 One-thousand and five-hundred gallons of gas was stolen from a Citgo gas station on Villard Avenue in Milwaukee.

The owners say the thieves came to the gas station four times over the month of August and took hundreds of gallons each time.

"Probably like four-thousand dollars," said the owner of the station. That's how much money the gas station lost to the thieves.

We have decided not to release the name of the owner or employees of the Citgo because they are worried about their safety.

The owner has surveillance video of the thieves taking hundreds of gallons the Sunday, August 29th.

when the owners looked at their surveillance footage. they noticed something about the guy.

"It looks like the guy's the same. Looks like a fat guy and he has a pony on the backside," said the owner.

The owner believes it is the same person that is suspected of stealing from a gas station in Caledonia. CBS 58 aired the surveillance footage from the theft earlier this month.

Both heists took place in a similar way. They happened late at night, multiple people were involved in the theft, and the gas would be stolen by bypassing the pump.

"He knows everything. Maybe he's a technician," said the owner.

Both gas station owners believe the person who robbed them was a former pump technician because the robbers knew what they were doing.

For the Citgo theft, the person would start the pump, and then would break into the pump or use a key to remove the meter. The gas would continue pumping without running a tab.

Milwaukee Police say they are investigating if the theft on Villard is connected to any recent similar incidents. Caledonia Police have not found who was behind that gas theft.