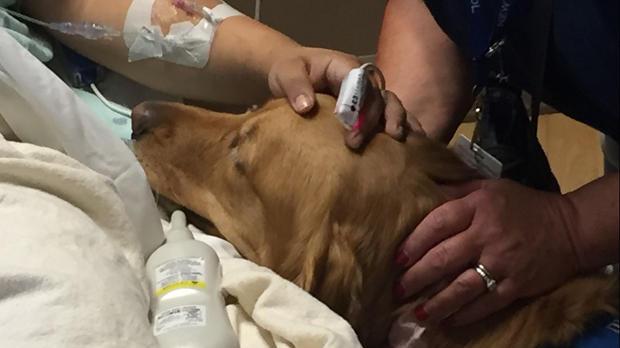 (CBSNews) As the old saying goes, dogs are a man's best friend. But to those affected by the Orlando nightclub shooting, a pack of 12 golden retrievers have become the true companions to a broken community -- providing unconditional love and sloppy kisses to anyone they could get their paws on.

Tim Hetzner is the president of a donation-based organization in Illinois that deploys a "sea of fur" - also known as K-9 Comfort Dogs -- to areas struck by crisis or natural disaster.

"With a golden, you don't feel alone, and you know that you're loved," he told CBS News. "That helps people at the time to cope and to talk, and to see that there's hope. There's light."

In the aftermath of the worst mass shooting in the U.S., Hetzner unleashed 12 dogs from seven different states and 20 volunteer handlers to Orlando within 24 after it was invited by Trinity Lutheran Church in Florida.

These furry friends, according to Hetzner, have inviting qualities that allow victims of a tragedy to feel safe: they listen without judgment, respect confidentiality, and, perhaps most importantly, they don't take notes.

Hetzner observed that a simple scratch behind the dogs' ears can easily unravel into something much bigger, sowing the seeds for the grieving process to begin.

"Before they can go forward, they have to process what they've gone through," he said. "The key of that processing is to be able to share it."

One interaction in Florida, according to Hetzner, exemplified the healing power of these canines. He described a young man who invited his out-of-town friend to Pulse nightclub. The friend died in the shootout, leaving the young man plagued by guilt and regret.

"He didn't talk to anyone," Hetzner said. "He just stood there. And then slowly, he got down and started petting the dog... And then he started asking one or two questions about the dog, and then said, 'You know, I lost my friend.' And then he explained what had happened."

The goldens don't just provide support to those who find themselves in the middle of crisis. They also pay visits to hospital staff, police officers, and press members, anywhere, at any time. This schedule may seem like child's play, but these dogs undergo training similar to that of service dogs, leading Hetzner to describe them as the "cream of the crop."

Starting at eight weeks old and for as long as 12 to 14 months, the K-9 Comfort Dogs learn how to manage their temperament in distressing circumstances. From walking up escalators to flying on airplanes, these dogs, Hetzner said, must be able to remain calm when interacting with a wide range of disabilities as well as age groups.

"Even people who have a fear of dogs, they'll look for a few minutes, and they'll see the behavior of the dogs, and then they'll come over and pet them because they're safe," Hetzner said.

Some may ask why golden retrievers, but Hetzner explained that they possess an innate desire to love indiscriminately.

"They're good inside and outside," he said. "They're smart dogs. And, they're temperament is that they're just lovers. Goldens love to please people."

Though the K-9 comfort dogs cannot undo dark memories of the past, they are able to lessen the shadow for, at least, an instant, whether that's with a quick lick or a snugly embrace.