The whole truth about "Danny Boy" 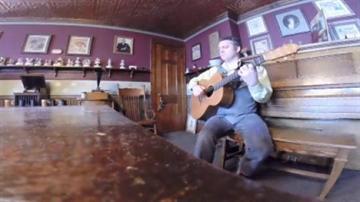 WAUWATOSA-\"Danny Boy\" is a popular request for local musicians around St Patrick's Day and CBS 58's Michele McCormack went to the Ward Irish Music Archives to find out the truth about who can claim the song as theirs.

Irish music archivist Barry Stapleton doesn't shy away from the fact that the song beloved in Irish American circles was written by an English Lawyer by the name of Frederic Weatherly, who according to family, never stepped foot in Ireland.

\"The year before he wrote the lyrics to the song he lost his father and his son,\" said Stapleton. \"So there's immanence in the song that it's about grief and loss.\"

But before you think some fraud has been perpetrated consider this: the melody attached to the words is from Ireland.

\"Probably first recorded and written down in 1851 by a woman named Jane Ross, County Lodonderry or Derry,\" Archivist and traditional Irish musician Jeff  Ksiazek explained.  \"She submitted it to George Petrie in 1855 who wrote 'Ancient Music of Ireland' and that's primarily how we think the tune spread.\"

Ksiazek, who plays with the group \"Athas\"  which means joy and gladness, says the melody could have existed a number of years before Ross wrote it down. There's some research that suggests that it may be parts of other tunes that were recorded maybe in the late 1800's or early 1700's.

For Belfast born singer/songwriter Ian Gould who's now raising a family in Delafield the origin is what's important.

\"When somebody produces a beautiful piece of music we can translate it in our own way.\" Gould said in between performances of his own rendition. \"When you try to attach too many things to it, even its origins, you're getting away from what the beauty of it is. You're getting away from its essence. Putting it in a box saying it's this or that when really it's just beautiful music.\"