"The Traveling Suitcase" visits the CBS 58 News at 4 p.m. before their big gig at the "Big Gig" 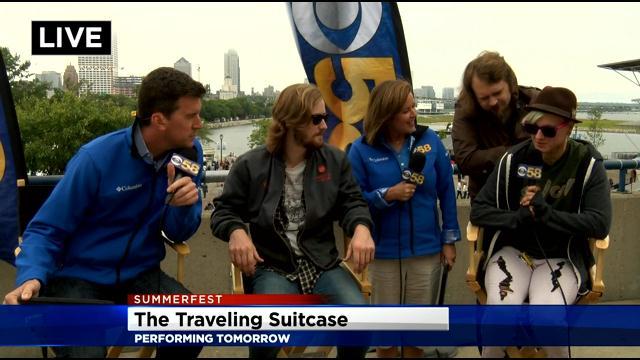 Oshkosh based \"The Traveling Suitcase\"  appeared live on the CBS 58 News at 4 p.m. Wednesday before their performance as the New Music Stage at Summerfest.

The band is made up of Nicole Rae on drums and vocals, Brandon Domer on bass and keys and Bill Grasley on Guitar.

\"I used to travel around a lot and I have a cat and the only way he would remain calm is if I put a suitcase with a pillow in it.,\" explained Rae about the band's name.

Described by fans as a real rock band. The trio says  Led Zepplein and the Doors influence them and they call their music rock and roll blend with the classic sounds.

The show must go on whatever the circumstances and because it's a festival setting where there's not a lot of time to change sets , Nicole has to use somebody else's drum set.

When asked if they can you stay based in Wisconsin and achieve the success they want, the band was matter of fact.

\"Success is what you make it,\" shared Rae. \"Surround yourself with good people and healthy lifestyle you can achieve anything.\"

For more information on \"The Traveling Suitcase\" click here