The return of cheap gas 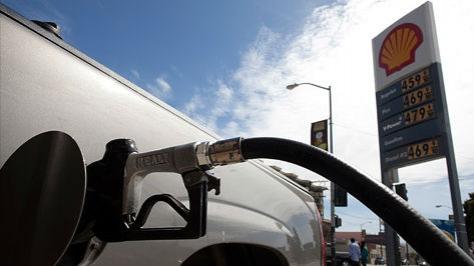 NEW YORK (CNNMoney) -- The last time Labor Day gas prices were this low, George W. Bush was in his first term as president.

Prices have been going nowhere but down since June. And according to AAA, the average price of regular gasoline is now $2.40 per gallon -- or more than $1 less than it was a year ago.

For this weekend, a time when a lot of Americans hop in their cars, prices are at 2004 levels.

The decline has been widespread. Average prices are still above $3 in only four states: California and Nevada, as well as Alaska and Hawaii -- two states where everything is always more expensive.

Of the country's 130,000 or so gas stations, more than 5% are selling gas for less than $2 a gallon, AAA says. In South Carolina, the statewide average has fallen below $2 in the past week.

For a lot of people, cheap gas is like getting a raise. The typical driver is saving about $50 a month because gas prices have fallen so much.

Americans are celebrating their savings.

Ben Prensky, 32, drove from a Philadelphia suburb to New York City with his family for the weekend. He has an SUV and usually fills up once a week. \"With prices as cheap as they are, it's been a huge help,\" he said.

Another driver on a #roadtrip tweeted Sunday about spotting gas for $1.99 a gallon in New Jersey.

Why gas is so cheap

Gas is cheap largely because the bottom has fallen out on oil prices. Crude accounts for about half the cost of a gallon of gas.

Oil is bought and sold on world markets and largely driven by supply and demand.

First, a surge in production from American shale producers has led to a massive glut of oil.

Normally, when prices fall, OPEC steps in and cuts production. But not this time. The cartel of some of the world's largest oil suppliers -- led by Saudi Arabia -- continues to pump record amounts.

Some see the move as part of a Saudi strategy to pressure American shale oil producers.

The fact that Iran may be reopened to Western oil interests, because of the pending sanctions deal, has also helped drive prices lower.

Not only is there too much supply, but demand for oil has been sluggish.

Some developed economies in Europe and Asia are barely growing and emerging markets in Latin America are stumbling. Growth in China, the world's second largest economy, has slowed dramatically. Economies need less oil when they cool off.

Of course, there is one big victim in falling prices: oil jobs. U.S. companies have disclosed at least 86,405 job cuts directly attributed to falling oil prices since June 2014, according to outplacement firm Challenger, Gray & Christmas.

Where gas prices are headed

The Energy Information Administration, a government agency that tracks the sector, is forecasting that the national average will drop to $2.11 a gallon by the end of this year.

Why? The supply and demand factors are not expected to change much. Besides, people always drive less after Labor Day, creating even less demand for gasoline, and U.S. refiners switch later this month to a less expensive blend of gas.

AAA says it believes gas will fall below $2 in many parts of the country by Christmas.

--CNNMoney's Matt Egan and Chris Isidore contributed to this report.