The One with the 'Friends' Coffeehouse: 'Cup O' Joe' set to open later this month in Twin Lakes 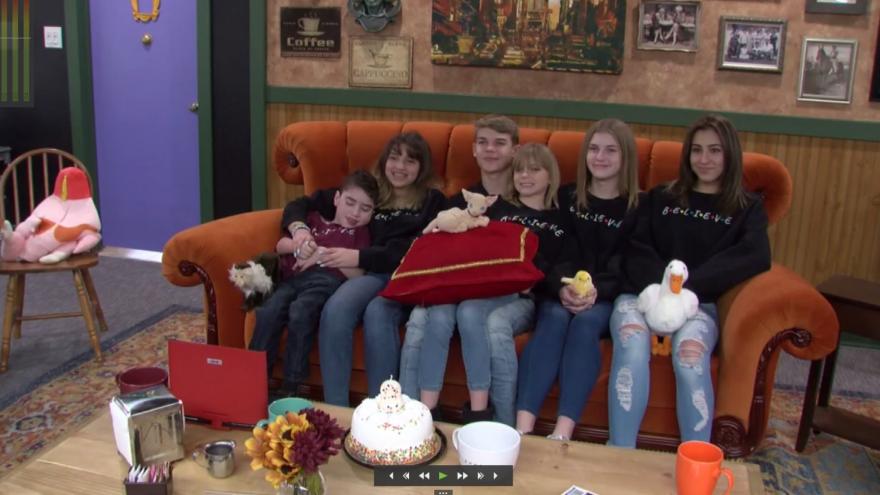 When Dena Prestininzi and Kim Hill moved from Escondido, Ca. to Kenosha County in 2018, they quickly fell in love with the village of Twin Lakes but didn't know anyone.

"There was no coffeehouse in town, and what a better way to meet people than to open up a coffeehouse?" Prestininzi said.

Hill opened a spiritual store that she formerly had online and together she and Prestininzi, a realtor, decided to open a coffeehouse. They're calling it 'Cup O' Joe' named in part after Prestininzi's father and son.

But Cup O' Joe, set to open on Feb. 20, is not just any old coffeehouse. It aims to make your 90s sitcom dreams come true. It's a place where sporting 'The Rachel' -- the ‘do of the decade -- is not only accepted but encouraged.

What Prestininzi and Hill didn't expect, however, was how quickly thousands of people on social media would rally around a 'Friends'-themed coffeehouse. Media outlets from around Wisconsin picked up the story.

They decided to get an orange couch, but a week after posts about their new space went viral, Prestininzi and Hill got a phone call from Marcus Theatres asking if they would like to buy a Warner Bros. replica couch from the show.

The company was auctioning the couch off for $7,500 for Children's Hospital, and the Cup O' Joe owners started a GoFundMe account where hundreds of fans donated to help them buy the couch. They ended up raising more than $11,000 for the hospital.

"It's funny that this couch -- like, a piece of furniture -- has that much power and magic," Prestininzi said.

Those who donated got to make reservations to sit on the couch and take pictures.

Even prior to the coffeehouse's opening, people from across the area have made reservations online for everything from senior pictures to gender reveals. Donations from those reservations are going to local charities.

"It's been 25 years now since it started, and it's amazing the fan base that this show has. It's just awesome that we're able to be a part of that," Prestininzi said.

And it's even better when they can make others’ dreams come true.

Holly Schroeder brought her entire family from Plainfield, Ill. to Twin Lakes for a birthday surprise for her son Manny. Manny, who just turned 8 in January, is diagnosed with epilepsy and cerebral palsy.

"He lives and breathes 'Friends.' Like literally at school, at home, in his sleep," Schroeder said.

The show first aired long before he was born, but Manny started watching 'Friends' at age 3. He's been laughing on cue ever since.

"His dad and I and his sisters would watch it together, and then we noticed that anytime we’d turn it off, he’d be a little more vocal, and anytime it went on, he’d get super excited," she said. "We’ve tried other shows. We’ve tried 'The Office.' My daughter tries that."

Schroeder was overjoyed at seeing her son be able to sit on the iconic orange couch and watch his favorite show on his DVD player.

She wanted to make sure it was Manny's day, his week, his month and his year.

"He’s usually not home for his birthday. He’s a lot of times in the hospital," she said.

His nurses even wrote about his obsession with the 90s sitcom in his hospital chart.

"To pass the time during his surgeries and whatnot they were like, 'Hey, listen. We know how to get him to calm down. We don’t need to do meds for it. They’d just have 'Friends' on," Schroeder said.

When Schroeder contacted Hill and Prestininzi, they were thrilled to help with Manny's birthday surprise and try to make his dreams come true.

"To be able to share that with somebody that it means so much to, it's something else, I don't even know how to put words to it," Prestininzi said.

Prestininzi and Hill are still putting the finishing touches on their coffeehouse ahead of its grand opening in two weeks. If you're a 'Friends' fan though, you likely won't be disappointed. They’re expecting fans from across the Midwest, who will get the chance to hear 'Smelly Cat,' meet Marcel the monkey and maybe even get a cup of coffee straight from the master barista himself, Gunther.

"The most fun that I've ever had in my life is this short journey that we've been on so far," Hill said.

So whether you’re a struggling actor, a confused barista or no one knows exactly what your profession is, you might have just found your new home in Twin Lakes.

"I just think every single one of the characters is so relatable because you can literally picture someone in your life that is that person," Prestininzi said. "Even though it was in the 90s to the early 2000s, I think it's kind of timeless."