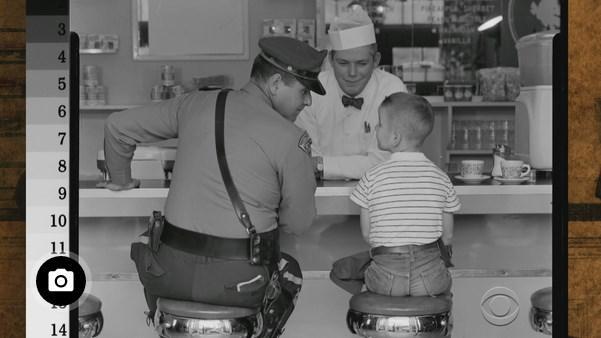 (CBSNEWS) Stockbridge, Mass. -- One hundred years ago this month, the first of more than 300 Norman Rockwell covers appeared in the "Saturday Evening Post."

But there's a little-known story about those portraits: between concept and canvas, there was camera.

"The Runaway," an image that's pure Rockwellian, shows Edward Locke posing on a stool with a police officer next to him. He was eight years old back then. Now he's 65.

"I'm stunned at how cute I was," Locke told CBS News' Lee Cowan.

It was 1958 when he posed at the counter of a Howard Johnson's, but before Rockwell ever put paint to brush, he called in a photographer.

Each photograph became the template for the final painting.

"So what did your friends at school think when it came out?" Cowan asked Locke.

"Well the friends at school were OK. You know, when you're sitting with a police officer, that's one thing. When you're posing with your pants down, that's quite another!"

He's talking about another painting -- one of the few Rockwell photographed himself.

"The townspeople said I was the kid who showed his butt for 5 bucks."

Photography was a technique Rockwell started using in the early 1930's to streamline his painting process.

"He really couldn't have somebody stand there for hours, it was just too tedious too time consuming, they couldn't hold the pose," said Stephanie Plunkett, the lead curator at the Norman Rockwell museum.

She's the keeper of the tens of thousands of reference photos, all of which Rockwell directed like a movie. No detail was left un-photographed -- not the linoleum floor, or a doctor's scale. Even Rockwell himself was photographed when a model wasn't unavailable.

"He really was a thinking painter. There was never anything in a Rockwell that wasn't there for a very good reason."

As for Locke, his modeling days ended shortly after he turned nine.

But the emotions Rockwell captured stretched beyond the still-frame

"I remember meeting a number of police officers. I'll never forget one of the policemen came up and said, 'You know, that picture has hung in our house since I was two years old.' So I was very proud of that."

For Norman Rockwell, it was story -- not paint -- that came first.