The dog no one owned but everyone loved 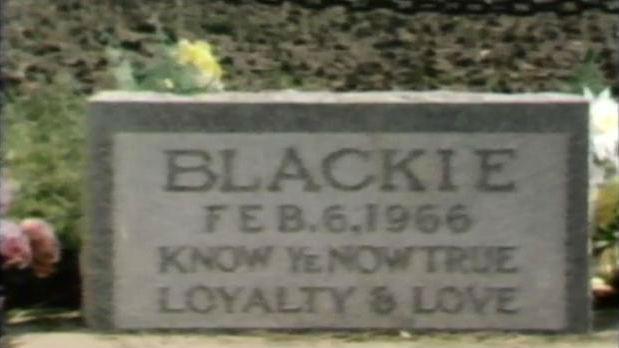 (CBS NEWS)If there is one thing that has stood the test of time, it is humans' affection toward dogs. The only proof you need is located along a stretch of country road in Coles County, Illinois.

There, near the brim of a road, lies a grave. To most observers it may seem out of place, but to those who know the grave's occupant - and you, too, will pretty soon - it's a welcome tribute that still gets attention nearly 50 years since its erection.

CBS News correspondent Charles Kuralt first stumbled upon the grave in 1978 and filed a story for the \"CBS Evening News\" as part of his On the Road series. As Kuralt discovered, the story first started in the summer of 1965, when a little black dog -- who seemed to be lost -- appeared on the road where Illinois Route 16 meets Route 49.

\"I've always theorized that he was dropped off or left and he just stayed here and was waiting for his master to return,\" said Bill Stiff, whose family farm adjoined the road where the dog was buried.

\"Often I saw him on this island between roads here, just sitting there kind of watching the traffic and apparently waiting and watching for someone,\" said Helen Parkas, who at the time was the editor of the weekly paper in Oakland.

The summer went by and Blackie kept his place at the crossing. People worried about how he'd fare in the coming winter and multiple families tried to adopt him, but to no avail.

\"All the neighbors and everything brought food out here,\" said Stiff. \"I remember, one account of Thanksgiving that he was here, and there was more turkey bones there than anybody could ever imagine, they were stacked up high.\"

Blackie sat there for months until one icy morning in February when he was struck and killed by a car. Saddened by the loss, a gravestone was put up at the site where Blackie had stood watch. For years kids took turns mowing the grass to keep the area cleaned up.

Decades later and it's now Rick Eskew who farms the land around Blackie's burial site. Eskew spoke to CBS News this week and says he continues to mow the grave area \"out of respect.\" And it appears people still haven't forgotten about Blackie. Flowers and lights are routinely left, usually on Memorial Day, said Eskew.

As Charles Kuralt said in his 1978 story, it's hard to explain the impression Blackie made on the people around Coles County. But perhaps the only explanation we need is in what they wrote on Blackie's grave marker.