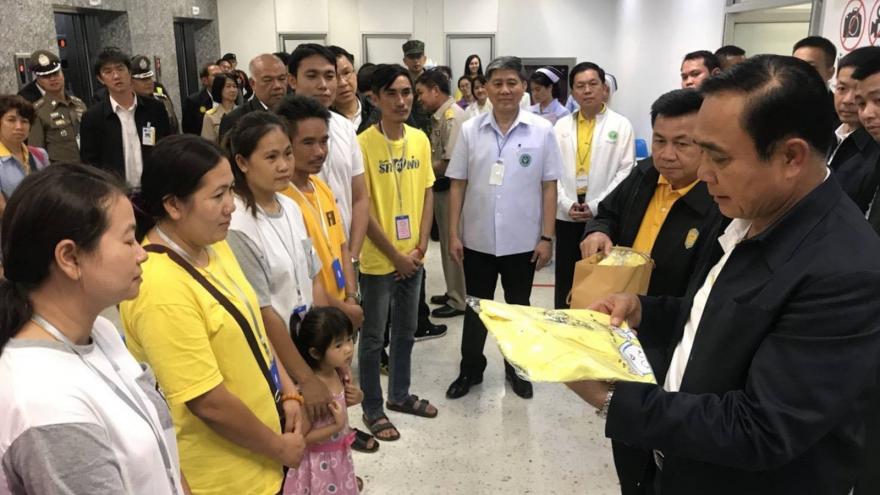 Prime minister Prayut Chan-ocha gives support to the families of the rescued boys and thanks hospital staff for taking care of the Wild Boar soccer team members being treated at the Chiang Rai Prachanookroh hospital.

(CBSNews) -- The 12 members of a soccer team and their coach rescued from a flooded cave in northern Thailand finally regained their full freedom on Wednesday, walking out of a hospital a week after they emerged from 18 days trapped underground.

(CBSNews) -- The 12 members of a soccer team and their coach rescued from a flooded cave in northern Thailand finally regained their full freedom on Wednesday, walking out of a hospital a week after they emerged from 18 days trapped underground.

The Wild Boars team members, who range in age from 11 to 16, and their 25-year-old assistant coach spent at least eight days -- there were brought to the hospital over the course of a dramatic three-day rescue operation -- at the hospital in Chiang Rai being tested and treated for relatively minor ailments, given their ordeal.

The team began leaving the hospital just after 5:50 a.m. Eastern on Wednesday to be transported to a conference center in Chiang Rai, where they're to give a news conference -- their first opportunity to present their own first-hand account of the story which has captivated a global audience for almost a month. The conference hall was decorated as a soccer field.

Government spokesman Lt. Gen. Sansern Kaewkamnerd said doctors, social workers and psychologists would participate in the news conference to filter questions and ensure the boys' well-being. The media would not be allowed to interview the boys after the news conference.

The Wild Boars teammates entered the Tham Luang cave on June 23 for a quick, relaxing excursion after soccer practice. But rain began falling while they were underground, and the water filled the caverns, cutting off their escape.

Divers found the group huddling on a spot of dry ground deep inside the cave 10 days later, hungry but generally healthy. An international team of rescuers using diving equipment and pulleys extracted the 12 boys and coach through the tight, flooded passageways over three days, concluding July 10.

Some of the boys were treated for minor infections during their hospital stay, but all 13 have been described as recovering well.

The entire soccer team, with rows of relieved parents sitting behind them, gathered at the conference center in Chiang Rai on Wednesday to tell the world, for the first time in their own words, about their 18 days trapped underground in a flooded cave.

The boys were seen smiling and talking to each other before the carefully orchestrated news conference began.

A cadre of social workers and mental health experts were on hand to deflect any questions from the media deemed too sensitive for them to answer this soon after their ordeal.

Cameras were outside the hospital in Chiang Rai to catch the first images of the boys, all of whom appeared happy and relaxed as dozens of adults shepherded them onto waiting vans.

A woman who came to the hospital just to see the now-revered soccer team emerge told a television crew she was "very happy" to see the boys walk out. She was emotional after watching the team members leave smiling.

All 12 team members and their assistant coach were on their way to the conference center to address a gaggle of journalists from around the world.

The family of one of the boys was preparing their home for his return Wednesday night.

Banphot Konkum, an uncle who has raised 13-year-old Duangpetch Promthep, said he'll have a renovated bedroom and gifts awaiting him.