Texas nurse tests positive for Ebola, would be 1st Ebola transmission in U.S. 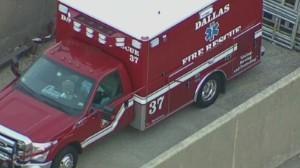 An official familiar with the case told CNN that the Centers for Disease Control and Prevention will investigate to see if guidelines were followed properly.

\"The CDC is looking very carefully around the circumstances of this patient's infection and will look to see if there were any breaches and, if so, what those were,\" the official said.

A female nurse at Texas Health Presbyterian Hospital in Dallas has tested positive for Ebola after a preliminary test, officials said.

Confirmatory testing will be conducted Sunday by the Centers for Disease Control and Prevention in Atlanta. Test results are expected to be announced later in the day.

The patient is a female nurse, an official who is familiar with this case told CNN.

The nurse is in stable condition, Varga said.

The nurse was involved in Duncan's second visit to the hospital, when he was admitted for treatment, and was wearing protective gear as prescribed by the CDC: gown, gloves, mask and shield, Varga said.

A \"close contact\" of the nurse has been \"proactively\" placed in isolation, he added.

The hazardous materials unit of the Dallas Fire Department has cleaned up and decontaminated the public areas of her apartment complex, Mayor Mike Rawlings said. Police are keeping people out of the area and are talking to residents nearby.

\"We have knocked on every door on that block,\" the mayor said.

Hazardous materials units have also cleaned out the nurse's car and will work on her apartment Sunday.

\"We knew a second case could be a reality, and we've been preparing for this possibility,\" Dr. David Lakey, commissioner of the Texas Department of State Health Services, said in a statement Sunday morning.

\"We are broadening our team in Dallas and working with extreme diligence to prevent further spread.\"

The nurse reported a low-grade fever Friday night and was isolated, the health department said. The preliminary test result came in late Saturday.

If confirmed by the CDC, the nurse's case would mark the first known transmission of Ebola in the United States and the second-ever diagnosis in the country.

\"It sounds likely that it's positive, and it's going to stay positive.\"

The news that a health care worker might have the disease is not completely unexpected, an infectious disease specialist told CNN's \"New Day.\"

\"I think we've always expected that there may be another individual who will come down with the Ebola from the transmission of this one particular person, and we always felt that it was going to likely be one of his close contacts or one of the health care workers, because that's the way this virus works,\" Dr. Frank Esper said.

Esper said Texas officials have been keeping a close eye on people who had contact with Duncan.

\"I will tell you that the fact that we identified this individual so quickly is actually to me a sign that the system is working,\" he added.

The World Health Organization estimates more than 8,300 people have contracted Ebola during this year's outbreak. Of those, more than 4,000 have died.

Ebola is actually very difficult to catch. People are at risk if they come into very close contact with the blood, saliva, sweat, feces, semen, vomit or soiled clothing of an Ebola patient, or if they travel to affected areas in West Africa and come into contact with someone who has Ebola.

Three countries -- Sierra Leone, Guinea and Liberia -- have been hardest hit. And many of those who care for the ill have also come down with the disease.

The World Health Organization estimates at least 416 health care workers have contracted Ebola, and at least 233 have died.

In Liberia, health care workers are threatening to strike if their work conditions don't improve.

The first infection outside of Africa happened in a nurse's aide in Spain, Teresa Romero Ramos. She became sick after she helped treat an Ebola-stricken Spanish missionary.

Her case has prompted questions from fellow medical professionals about whether they are properly equipped to safely treat Ebola patients.

For weeks, health officials have been monitoring those who had contact with Duncan before he was hospitalized and isolated.

But despite telling a hospital worker that he had arrived from Liberia, Duncan was sent home with antibiotics. He returned a few days later and tested positive for Ebola.

And now, the search begins for all the contacts whom the nurse came in contact with.

Because Ebola's incubation period can last up to 21 days, the health nurse's contacts will have to be monitored for three weeks.

The Texas health department said officials have interviewed the patient and are identifying any contacts or potential exposures.

\"This is not an easy thing,\" Cohen said. \"Keeping track of large numbers of people, taking their temperature twice a day, making sure they don't ... leave town, all of that is a lot of work.\"