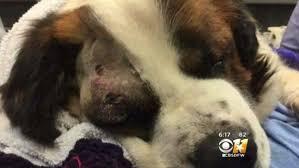 (CBS NEWS) Three months ago, a St. Bernard known as "Big Ben" was hours from euthanasia -- when a family from Fort Worth made him a part of theirs.

They saved his life once, and now they're at it again after he was taken from the family's back yard Monday, tortured and left for dead, CBS Dallas-Fort Worth reports.

"It hurts," said Cassi Moss, Big Ben's human mom, her eyes filling with tears. "I haven't even told my kids."

Big Ben's beautiful eyes are now unrecognizable. The attack blinded him in one and his toes on one paw were severed.

"I think somebody intentionally did it," Moss said. "I really do. The cuts are not rigid. Looks like a baseball bat... it's a perfect circle."

Moss is certain that Big Ben was taken from their yard. When she noticed him missing, the gate was still closed. Whoever took him had to close the gate behind them.

But, there was another worry more pressing: how would they pay for Big Ben's care? The emergency veterinary bill was some $1,600 for just one night.

Sherri Green runs a local animal rescue group and helped the Moss family find Big Ben. With few options, they reached out to her for help. Green, in turn, reached out to other animal lovers.

"It puts an owner in a position where a dog could be saved if they had the money," said Sherri Green, "or the dog has to be put down."

Within hours, a GoFundMe had donations pouring in from around the world. The pictures on the page show the severity of some of Big Ben's injuries and are graphic.

"It's still going to be a battle," said Green. "He has very long road ahead of him."

Green arranged for doctors at the Greenville Animal Hospital in Greenville to take over Big Ben's care. He is facing multiple surgeries, if doctors can get him stable. Veterinarians there have agreed to treat him for whatever donors contribute: and the Moss' plan to stay by his side.